For the 25th week of 2019 as part of Wandering Through the Shelves' Thursday Movie Picks. We delve into the subject of period dramas as they would take place on a certain period of time as a way to recreate that period or to explore themes during those times. Here are my three picks:

Max Ophuls’ 1955 film about the famed dancer/courtesan who tells her life story in a circus about her numerous affairs in a stylish presentation. Set in the 19th Century, it is this unusual yet rich film that features a radiant performance from Martine Carol as it plays with history but also explore a woman who endured so much as she rose high and then fall into ruin.

Stanley Kubrick’s adaptation of William Makepeace Thackery’s novel of the life of an Irishman who would find himself into various situations out of his control and become part of high society only to fall when he takes advantage of being part of that world. Featuring Ryan O’Neal in an understated performance, Kubrick’s film is a high watermark of what a period film should be in terms of visuals and in atmosphere as it remains this fascinating study of a man putting himself into situations that are completely strange to him. 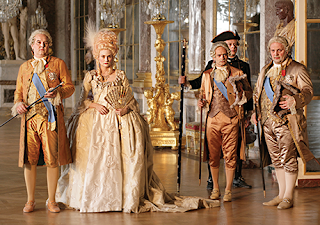 Benoit Jacquot’s adaptation of Chantal Thomas’ novel about the final days of Marie Antoinette’s reign as Queen of France is a compelling and gorgeous film that follows those last days told from the perspective of a young maid. With Diane Kruger as Marie Antoinette and Virginie Ledoyen as her friend the Duchess of Polignac, it is Lea Seydoux’s performance as the maid Sidonie that really drives the film as someone who is trying to observe everything around her just as this world of palace life is about to come apart.

Lola Montes is visually beautiful and I loved Peter Ustinov in it, once was enough for me though.

Again Barry Lyndon is a gorgeous treat for the eyes but dear God it bored me silly.

Haven't seen Farewell, My Queen yet but its on my to see list.

I love period films as well and with so many to choose from I decided the easiest way was to just pick three that I loved.

A Room with a View (1985)-In the early years of the 20th century English lass Lucy Honeychurch (Helena Bonham-Carter) is making a tour of Italy with her spinster cousin Charlotte (Maggie Smith). At a pensione in Florence, the pair become acquainted with the expansive Mr. Emerson (Denholm Elliott) and his free-spirited son George (Julian Sands). When Charlotte intuits that Lucy is too intrigued by George they depart back to England where Lucy ponders settling down with the wealthy, staid Cecil Vyse (Daniel Day-Lewis). Unexpectedly George reappears in her life and Lucy must decide between a sensible marriage with Cecil or the riskier true love of George. Lush, brilliantly acted comic drama from Merchant/Ivory based on an E.M. Forster novel.

Maurice (1987)-Another Merchant/Ivory adaptation of an E.M. Forster novel but one that was only able to be published posthumously because of the controversial subject matter. In 1909, Maurice Hall (James Wilby) enters Cambridge, where he befriends wealthy Clive Durham (a very young Hugh Grant). Clive confesses he is sexually attracted to Maurice, who realizes he is a homosexual when he begins to return Clive's feelings. The two embark on an intense but chaste affair to avoid tarnishing Clive's reputation, but eventually the relationship ends, and Clive marries Anne (Phoebe Nicholls). While visiting Clive, Maurice is drawn toward his friend's servant, Alec Scudder (Rupert Graves) and a more meaningful relationship looms for the two. Meticulously made with incisive work by the three leading men.

Mansfield Park (1999)-In 1808 poor relation Fanny Price (Frances O'Connor) comes to live with wealthy uncle Sir Thomas (Harold Pinter), his haughty wife Lady Bertram (Lindsay Duncan) and their four children, at their country mansion-Mansfield Park-where she'll be brought up for a proper introduction to society. Indifferently treated by her relatives, except for her cousin Edmund (Jonny Lee Miller) Fanny's life is thrown into disarray with the arrival of worldly Mary Crawford (Embeth Davidtz) with whom Edmund becomes smitten and her brother Henry (Alessandro Nivola). Cunning, duplicitous and sly they cause endless complications for the entire household until a fateful event comes to pass. Solid adaptation of one of Jane Austen’s lesser known works.

You stumped me this week, I haven't seen any of these.

Oooh! I didn't know that Stanley Kubrick made a period drama film! I need to check it out!

I'm the same as Brit - I haven't seen any of these! I've always struggled to find interest in Period Dramas but maybe I just haven't seen enough of the great ones. I love those costumes in Farewell My Queen!