In the first week of 2020 for Wandering Through the Shelves' Thursday Movie Picks. We venture into the subject of escape as it could be a prison break or something or maybe an escape into some kind of fantasy world. Here are my three picks: 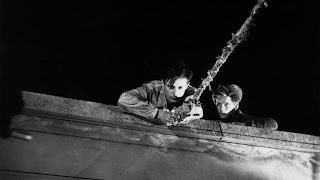 From Robert Bresson is a film based on Andre Devigny’s memoir about his own prison escape during World War II as it revolves around a member of the French Resistance who is captured by the Germans during Nazi-occupied France in World War II. It plays into a man’s experience in prison while its third act that is about the prison escape is an intensely gripping moment. Notably in the attention to detail as well as play into what could go wrong as it is one of Bresson’s finest films. 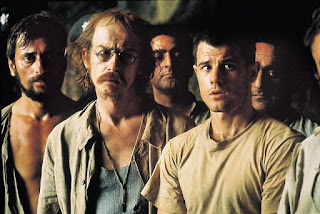 Alan Parker’s 1978 prison drama is another fact-based story about an American tourist who gets caught trying to smuggle hashish in Turkey as he is sent to prison for five years where just as his sentence is about to end. Everything goes to shit when a prosecutor decides to expand the sentence to thirty years as it explore the sense of injustice and loss this young man would endure. The prison escapes would occur during its second act as it play into some of the terror that happens with its third act being more about a mental prison as it showcases what a man is willing to do to escape a world that is extremely unforgiving.

3. The Count of Monte Cristo 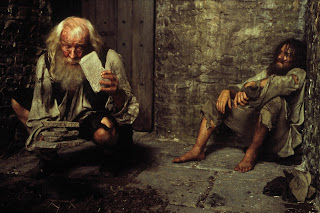 Kevin Reynolds’ 2002 adaptation may not be entirely faithful to the Alexandre Dumas novel but it is still a film that continues to get more overlooked in the coming years not just to its visuals but also its suspense and character study. Notably in the betrayal and injustice that an ordinary sailor in Edmond Dantes endures as he is accused of murder and later sent to prison where he endures abuse and neglect. While he would meet a fellow prisoner in a priest who is played with such gravitas by Richard Harris, Dantes would learn many things while eventually finding a way to escape his prison and get revenge on those who betrayed him as it is just an incredible film.

I like your idea here with escaping to a fantasy place, unfortunately I haven't seen any of these films. But I'm familiar with them at least.

A Man Escaped is such a fascinating film and I'm not entirely sure why it works. In so many other hands, what Bresson shows us would be dull, but here it's fascinating.

Midnight Express was so unfairly overlooked and forgotten. Great choice!

I just saw A Man Escaped within the last year and thought it was great. So tightly directed and excellently performed.

Midnight Express is an intense view but wonderfully realized. Brad Davis really gets under the skin of his character.

I didn't expect much from this version of Count of Monte Cristo, it being the umpteenth redo but it was visually arresting and very involving. A good time.

I did a small theme within the theme.

Escape (1940) American Mark Preysing (Robert Taylor) arrives in Nazi Germany searching for his mother, one time stage star Emmy Ritter (Nazimova) a German native who has gone missing. Discovering she has been arrested, interned in a concentration camp and scheduled for execution on trumped up charges he turns to a sympathetic American expatriate Countess Ruby von Treck (Norma Shearer) to formulate a plan and attempt an escape.

Escape (1948) Matt Denant (Rex Harrison), newly released from the Air Corps after the war’s end, is wrongly convicted of a crime and sentenced to be imprisoned for three years. Managing to escape he takes flight, at times literally, and with the help of local girl Dora Winton (Peggy Cummins) he attempts to flee his unjust punishment. Directed by Joseph L. Mankiewicz.

Escape (aka The McKenzie Break) (1970) In a remote northern Scotland POW camp German submarine Capitan Willi Schlüter (Helmut Griem) challenges the authority of the camp’s Commanding Officer, Major Perry (Ian Hendry) leading to major conflicts. British Army Captain Jack Connor (Brian Keith) arrives to investigate what he believes to be escape attempts. While he looks into matters Schlüter leads an escape party through a hidden tunnel and the chase is on!

I don’t know The Man Escaped and now want to see it. I have not seen The Count of Monte Cristo but I love Guy Pierce and this has been on my radar for a few years. Finally, someone used Midnight Express which I almost chose. This film is intense but excellent and I wish more people would know Brad Davis more.

@Brittani-Get a chance to see these films. A Man Escaped is a must as it is a nice introduction to the works of Robert Bresson though I think Pickpocket and Au Hasard Balthazar are the best places to start.

@SJHoneywell-I'm glad to know someone else here is a fan of Bresson.

@joel65913-Glad to see someone who thought The Count of Monte Cristo was worth watching.

@Birgit-Same here as I also saw another film he did in Querelle by Rainer Werner Fassbinder which was the final film Fassbinder made as he died during post-production of that film.