In the second week of 2020 for Wandering Through the Shelves' Thursday Movie Picks. We go into the subject of three favorite films by Steven Spielberg as here’s a filmmaker who has made a lot of films ranging from adventurous blockbusters to sprawling historical epics as he’s managed to win over a lot of people. He has made a lot of great films but also some stinkers as here are my three favorite films by Steven Spielberg but not my all-time favorite that is E.T. the Extraterrestrial:

1. Empire of the Sun 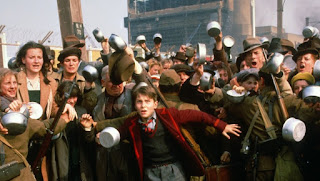 Definitely one of his more underrated films and often criticized initially as Spielberg trying to be taken seriously, the film is far more compelling than what the critics thought upon its initial release as it is really about a boy’s loss of innocence and having to grow up way too fast during World War II. A cinematic tribute of sorts to David Lean, the film revolves around a British boy living in Shanghai as his fascination for Japanese fighter planes has him separated from his parents where he finds himself living in a camp with others trapped in Japanese-occupied China during that time as he deals with his situation and such as Spielberg succeeded in showing the world this future young talent that would become one of the finest actors working today in Christian Bale. One of the finest war films ever made as well as featuring one of the most violent and extreme opening sequences ever made that is the landing of Omaha beach in Normandy. The film isn’t just one of Spielberg’s best films but also a film that is about the importance of brotherhood in war as a captain and his platoon trek through France to find a young private and bring him back home after his three brothers had been killed in action during the war. At times, it’s unforgiving in its presentation but it’s also got some somber and powerful moments as it is a crowning achievement in film. 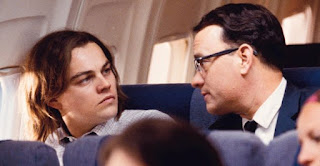 This film is a personal favorite of mine but it’s also one of my dad’s favorite films as it does play into a recurring theme that is in many of Spielberg’s films which is about family. It is based on a true story about a young man who forges a check and then commits many forgeries to the point that it gets the attention of a FBI agent. My dad is a big fan of Leonardo DiCaprio as he really loved his performance in the film while he loved the setting and everything else as it’s a film that I can re-watch over and over again out of pure joy.

I haven't seen Empire of the Son but the other two are solid picks. Catch Me If You Can is on TV so much, I always seem to find myself watching it.

I love Catch Me If You Can too - the cat and mouse pacing is so interesting and well done.

I'm so glad you picked Catch Me If You Can. It is so fun and it often doesn't get the attention it deserves.

My dad loves Saving Private Ryan! It really is a great film.

Great picks! I've seen all those films and we actually share one with Catch me if you can!

I LOVE that this Thursday Movie Picks is still going strong! Great picks, even though I'm too scared to see Saving Private Ryan as I have no stomach for gore. Man it's hard to pick my fave Spielberg films, but if I can only pick just three I'd choose Indiana Jones and the Last Crusade, Jurassic Park and Minority Report.

I love Saving Private Ryan - it has one of the best and horrifying war scenes when they charge that beach. It just feels like you as a viewer are getting hurt just by watching it.

We match! I love Empire of the Sun and, when it came out, I think many in the industry wanted to bring Spielberg down a few notches and this film paid the price. People have no idea that Christian Bale was a child star first before becoming a brilliant, intense jerk of an actor. Saving Pvt Ryan is also an excellent film and the first 20 minutes is the best part. I actually prefer The Longest Day over this film because The Longest Day showcases the whole D Day and is more of a docudrama in some respects. Catch Me is a fun film and one that is quite enjoyable

@Brittani-It's one of those films that whenever it's on, I just watch it for some reason as it has a special place in my heart because it's one of my dad's favorite films.

@Jay-Indeed as I think it's one of those films that gets better with every re-watch.

@Sonia-Indeed, for a lot of the films that Spielberg is known for. This is the one film I wish would get more love.

@B-Oh it totally is though The Thin Red Line for me was the better war film that year.

@ThePunkTheory-I wanted to do something different as I wanted to put more spotlight on 2 of Spielberg's films that aren't masterpieces to some.

@Ruth-Yes, the violence in that D-Day sequence is intense and gory as I can understand if you're scared of seeing it. It does become a different film of sorts afterwards.

@Getter-Oh yeah and what I love about it is that you're in the action and you do see blood on the camera lenses.

@Birgit-The 80s showed Spielberg wanting to do so many things and showed that he was more than just a blockbuster filmmaker whose films made a lot of money. There was more to him and I think Empire of the Sun showcased what he could do when he takes on a serious story and put his own spin into it. It's one of those films that I think has gotten better over the years. Christian Bale I don't think is a jerk and believe me. If you were doing a film directed by someone like McG, you'd freak out as well.