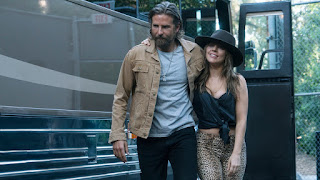 Directed and starring Bradley Cooper and screenplay by Cooper, Will Fetters, and Eric Roth that is based on the 1937 film by William A. Wellman and co-writers Robert Carson, Dorothy Parker, and Alan Campbell that was produced by David O. Selznick, A Star is Born is the story of a troubled country-rock singer who meets an unknown singer as he takes her on tour and help guide her own music career just as his starts to decline. It’s a film that was first told in 1937 and had been remade two more times in 1954 and 1976 as it is now told in another new interpretation for a new generation with Cooper playing the role of the singer Jackson Maine and pop singer Lady Gaga as Ally. Also starring Sam Elliott, Dave Chappelle, Anthony Ramos, Rafi Gavron, Greg Grunberg, and Andrew Dice Clay. A Star is Born is a rapturous and heart-wrenching film from Bradley Cooper.

The film is the simple story about the diverging paths of a troubled country-rock singer and the woman he would fall for and make her into a pop star. It’s a story that had been told three different times in its different incarnations as the script by Bradley Cooper, Will Fetters, and Eric Roth use those three different stories to set in the 21st Century where country-rock artist Jackson Maine is touring and making music although his popularity is starting to decline as he would meet this young woman named Ally at a drag club where she sings La Vie En Rose. Ally is also a songwriter but hasn’t made any waves to attract people in the music industry as she’s stuck in a waitressing job and not do much other than live with her father Lorenzo (Andrew Dice Clay) who runs a chauffeur business with friends. When Maine meets Ally at the drag club and strikes a conversation with her about music, sparks happen as he later invites her to one of his shows as they sing a song that she created.

Immediately, Maine accompanies Ally on their tour yet his older half-brother Bobby (Sam Elliott) is concerned about Maine’s alcoholism as well as his tinnitus which is getting worse while Ally’s songs finally attract the attention of a producer in Rez (Rafi Gavron). Through Rez, Ally would go pop and become immensely successful yet Maine struggles with his own issues as he finds himself playing a show in Memphis for money as he questions his own integrity as well as Ally’s decision to do pop music. The script showcases not just some of the decisions Maine has made in his life and career but also the struggle to realize that Ally has so much to offer as he fears he would ruin her. Yet, Ally is aware of Maine’s troubles as she is eager to help him any way she can as well as willing to risk her own career.

Cooper’s direction does have some elements of style yet much of his direction is straightforward in his presentation of life on the road and on stage as well as the backstage parties, recording sessions, and rehearsals. Shot on various locations with much of it in Arizona and California, Cooper does play into this world that Maine is often surrounded in that include open landscapes, amphitheaters, and music festivals where appearances in such noted festivals as Glastonbury in Britain and Coachella in California are shown. Cooper’s usage of the wide shots showcase the vast world of the venues and festival areas that Maine and later Ally would play to but Cooper also maintains an intimacy as he often captures the performance on the stage with some perspective from the audiences and from the backstage area. The usage of close-ups and medium shots of the performances and some of the action backstage as well as the usage of cell phone footage add to the excitement of the performances in the film.

The non-musical scenes do have an intimacy in the way Ally and Maine would create songs as well as go into discussions about the idea of integrity in music as Cooper knows how to create simple compositions but also in the way characters would react to another. Cooper also maintains that air of simplicity while knowing what not to show during a key dramatic moment late in the film. Notably in the third act as it play into Maine’s own downfall due to his substance abuse as well as growing tinnitus where he is trying to recover but there is also this danger that he could screw things up again. Yet, there is the music as it is what brings him and Ally together as it is a crucial moment for not just its climax but also the ending into the journey that these two endure. Overall, Cooper crafts a touching and ravishing film about the diverging journeys between a country-rock singer and his pop star wife.

Cinematographer Matthew Libatique does brilliant work with the film’s cinematography with its usage of stylish lights for some of the clubs, venues, and bars the characters go to as well as the lighting in some of the concert scenes and some of the natural elements in the film’s exterior scenes. Editor Jay Cassidy does excellent work with the editing where it is straightforward for much of the film while knowing when to keep shots going as well as create a few montages in some parts of the film. Production designer Karen Murphy, with set decorator Ryan Watson plus art directors Matthew Horan and Bradley Rubin, does fantastic work with the look of Maine’s home that he would later share with Ally as well as the home that Ally lived in with her father. Costume designer Erin Benach does nice work with the costumes from the casual and cowboy-like clothing that Maine wears to the more stylish look that Ally would sport in the clothes that she would wear as a pop star.

Hair stylist Joy Zapata and makeup artist Debbie Zoller do terrific work with the look that Ally would venture into from being somewhat plain into being a bit more glamorous into her transformation as a pop star. Visual effects supervisor Bruce Jones does wonderful work with some of the film’s minimal visual effects as it mainly serves as set dressing for some scenes in the film. Sound editor Alan Robert Murray does superb work with the sound in the way live music sounds on locations as well as the way music sounds when it’s being recorded as it is a highlight of the film. Music supervisors Julianne Jordan and Julia Michels do incredible work in cultivating the film’s soundtrack as it feature a lot of original songs sung and performed by Cooper and Lady Gaga with the latter co-writing some of the material with Lukas Nelson, Jason Isbell, Diane Warren, DJ White Shadow, Mark Ronson, and Andrew Wyatt as its mixture of country, country-rock, pop, and dance pop add to the story as it’s one of the film’s major highlights.

The casting by Lindsay Graham and Mary Vernieu is marvelous as it feature notable small roles and cameo appearances from Alec Baldwin as himself hosting Saturday Night Live, Halsey as herself presenting an award, Marlon Williams and Brandi Carlisle as themselves performing at the awards show, Luenell as a grocery cashier, Eddie Griffin as a local preacher, Drena de Niro as the wife of Maine’s friend Noodles, Greg Grunberg as Maine’s driver Phil, the trio of Barry Shabaka Henley, Michael D. Roberts, and Michael Harney as Lorenzo’s friends, Shangela Laquifa Wadley as the drag club emcee, William Belli as the drag queen Emerald, and Ron Rifkin as Maine’s rehab therapist Carl. Dave Chappelle is superb as Maine’s longtime friend and former musician Noodles as a man who has chosen the simple life as well as offer Maine a glimpse into that life that would inspire him to commit full time to Ally.

Rafi Gavron is terrific as Ally’s manager/producer Rez as a man who would drive a wedge between Ally and Maine but is also aware of Maine’s troubles with drugs and alcohol and uses it against Maine. Anthony Ramos is fantastic as Ally’s friend Ramon who would introduce Maine to Ally as well as be someone who would be on Ally’s side and be one of the few people in her life who keeps her grounded. Andrew Dice Clay is excellent as Ally’s father Lorenzo as a man who is supportive of his daughter while is also worried about her not making it knowing about those who had the talent but never made it as it is a charismatic and grounded performance from Clay that also has an air of tenderness that is unexpected from the comedian. Sam Elliott is amazing as Maine’s older half-brother Bobby who also manages Maine as he is aware of his brother’s troubles with substance abuse and his tinnitus as well as being the one who is trying to take care of everything as it is one of Elliott’s finest performances.

Finally, there’s Bradley Cooper and Lady Gaga in phenomenal performances in their respective roles as Jackson Maine and Ally. Cooper’s performance as Maine displays a man who is talented but also extremely troubled as years on the road, recording, and partying is starting to take its toll while his tinnitus is starting to get worse as he is in denial about his issues while is forced to face the reality of his troubles. Gaga’s performance as Ally is a marvel to watch as she displays the sense of reluctance to go into a singing career while eventually finding the confidence but is also someone who doesn’t take shit from anyone. Cooper and Gaga together are incredible to watch in the way they bond with one another as well as the scenes where they argue as they added that edge into two people who both have a love for music and each other but at times can’t stand one another as they are a major highlight of the film.

A Star is Born is a spectacular film from Bradley Cooper that features great performances from Cooper, Lady Gaga, Sam Elliott, and Andrew Dice Clay. Along with its evocative soundtrack, gorgeous visuals, a fresh and daring reinterpretation of an old story, and top-notch musical performances. It’s a film that isn’t afraid of being a remake but also find ways to do something new with it while being this whirlwind romantic drama of two singers both going into different paths only to go up when they work together. In the end, A Star is Born is a sensational film from Bradley Cooper.

I really couldn't embrace this one.

I had a few quibbles here and there but to be honest I was surprised at how much I liked the movie. And as you mention, the performances are superb. Great chemistry between Cooper and Gaga.

@Jay-Sorry it didn't work for you. BTW, what you think of the other versions?

@keith71_98-I ended up liking this a lot more than I expected. Next up will be the version starring Judy Garland and then Barbra.

Nice review! When this project was initially announced, I thought it was going to be a trainwreck. But Cooper and Gaga did a great job with the direction, story, and music. The 1954 version is my favorite of the "series", but this is a close-second.

@Katy-Thank you. I have the 1954 version set to be recorded in a day or two as that's the version I'm going to see next and then the Barbra Streisand version.