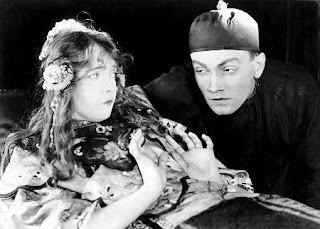 Based on a short story by Thomas Burke, Broken Blossoms is the story of an abused young woman who meets a kind-hearted Chinese man as they fall in love as he helps her get away from her abusive father. Written for the screen and directed by D.W. Griffith, the film is a silent drama that explores a woman who finds solace in this foreigner much to the dismay of her father. Starring Lillian Gish, Richard Barthelmess, and Donald Crisp. Broken Blossoms is a fascinating though flawed film from D.W. Griffith.

Set in London’s port areas, the film revolves around a Chinese man who moves from China to London in the hopes of spreading the message of Buddha to the Anglo-Saxon world as he befriends a beautiful but abused and unwanted young woman who is treated cruelly by her boxer father. It’s a film with a simple premise as it play into the misfortunes of a young woman and a Chinese man trying to live in a world that is cruel and unforgiving as he tries to display his ideals to the world. D.W. Griffith’s script doesn’t have a strong plot as it never goes more into the misfortunes of this young woman as well as the Chinese man trying to help her. Even as the character of her father plays up to the many clichés of a man full of pride and cruelty with some of the dialogue not being strong enough to get past the clichés.

Griffith’s direction does have elements of style in the compositions he creates though it is hampered by many of the shortcomings of the film’s script. While the setting he creates for the foggy port area of London is entrancing to watch with some color schemes to help set the mood. Griffith’s approach to getting his actors to perform at times comes off as overly theatrical or overly-emotive while having white actors play Asians definitely puts the film on a bad light. Despite the choices made in those times, Griffith does create some unique visuals and compositions in capturing the dreariness of the locations through wide and medium shots along with the interaction between characters in the latter as well as close-ups. Griffith also plays into the melodrama as it relates to the plight of the young woman and the kindness she would receive from the Chinese man despite the terror her father would bring that would include this terrifying scene in a closet that showcases her father’s rage. Overall, Griffith creates a compelling though substandard film about a young woman seeking solace in a kind Chinese man.

Cinematographer G.W. Bitzer does excellent work with the film’s grainy de-colored cinematography with its usage of filters to help set the mood and lighting schemes for scenes set at night. Editor James Smith does nice work with the editing as it is straightforward with some rhythmic cuts to heighten up the drama. The visual effects work of Hendrik Sartov does terrific work with the visual effects to help create foggy look for a few scenes as well as the look of China. The film’s music by Joseph Turrin, for its 2001 restoration, is amazing for its score with its emphasis on lush orchestral strings with some traditional Chinese-inspired pieces including its usage of string instruments and some piano pieces as it is a highlight of the film.

The film’s cast feature some notable small roles from Norman Selby aka Kid McCoy as a prizefighter, Arthur Howard as Burrows’ manager, George Beranger as a friend of Burrows who spies on the Chinese man, and Edward Piel Sr. as a Chinese man known as the Evil Eye who causes trouble as it’s one of the worst performances as it is a white man playing an evil Chinese man as it just feels wrong. Donald Crisp’s performance as the boxer Battling Burrows has their moments in terms of the ferocity and terror he brings though it is hampered by some of his performance choices including the boxing scene as he isn’t convincing as a boxer. Richard Barthelmess’ role as the Chinese man Cheng Huan as it has moments where he displays that air of kindness but the fact that he’s a white man playing Chinese where he has to squint his eyes just adds that air of discomfort into his performance. Finally, there’s Lillian Gish in a fantastic performance as Burrows’ daughter Lucy where she brings that air of despair into her performance despite the fact that her character is 15 and she’s a lot older than that though Gish also provides that sense of radiance into the performance to make up for that flaw.

Broken Blossoms is a stellar though flawed film from D.W. Griffith. While it does feature some nice visuals, gorgeous compositions, and a few notable performances from its cast. It suffers from some of the dated racism in the film as well as in some of the casting decisions that had to be done during the late 1910s as it does hurt the film. In the end, Broken Blossoms is a fine but discomforting film from D.W. Griffith.

Oh we're going to the way back for this one. Good stuff!

I cringe when I see some of these old films where white actors are playing characters of color. I think it's too distracting for me at this point to actually watch and enjoy.

@Jay-Well, it's an alright film but the whitewashing aspect of it definitely made me uncomfortable.

@Brittani-That was one of the reasons why I had a hard time watching it as it was cringe-worthy as is some of the language which is why I didn't mention the short story's original title (cause it's racist) and the additional subtitle for the film as that is something I will not post. I maybe a politically incorrect asshole but there's things that I just won't write about.

I was aware of the movie's compromises before I sat down to watch it which made it an easier view. It was a bit surprising that this early in film Griffith didn't use an Oriental actor for the male lead, since that was no Code to prevent it, but Barthelmess was one of the premiere players within his stock company. That surely played into the decision. It might have also been a dearth of choices, Sessue Hayakawa would have made more sense even though he was Japanese not Chinese and he was active at the time but I'm not sure outside of him that there was a large pool of professional Chinese actors available. Not that Griffith would have necessarily gone that route, he usually stuck with his troupe when casting.

All that aside I found the picture a tough sit. Given his unsuitability for the part Barthelmess does a good job definitely bringing out the pathos in his character.

I love Donald Crisp and I knew he had been a silent star but up until I saw him in this to me he was always the kindly, gruff rascal with the lilting voice of his sound movies. So to see him as the brutal father was a bit of a jolt. I thought he did well but I'll take his later iteration any day.

But the reason to see this is unquestionably Lillian Gish. She is what silent film acting is all about. EVERYTHING is right there in her face and gestures. For her dialog is superfluous, her only equals were probably Clara Bow and Lon Chaney. Completely instinctual creatures.

I doubt I'll ever watch it again, which is true of every silent I've seen except for Chaney's The Unknown, but I'm glad to have checked it off my list.

@joel65913-It was a slog to get through at times as the two other films by Griffith I've seen were much longer but were better-paced as this was tough to get through as I doubt I'll ever see it again.

This movie just doesn't ring a bell to me. I kept thinking it sounded familiar but as I read I realized I haven't seen it. Sounds like there's no rush.

@keith71_98-I'd only watch it for historical reasons or any interest towards D.W. Griffith but that is it. The racist elements of the film really made a somewhat un-enjoyable experience to watch.