In the eighth week of 2020 for Wandering Through the Shelves' Thursday Movie Picks. We venture into love in the tech age as it’s become something common now in the 21st Century through chatrooms, social media apps and devices, and all sorts of shit. A world that is about wanting to connect yet it also serves as a danger in the way it disconnects people with actual human contact. Here are my three picks as they’re all directed by women: 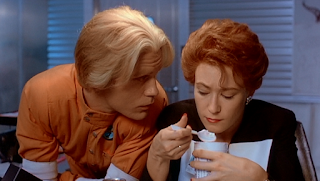 From Susan Seidelman comes an underrated romantic comedy about a PR agent who is hired to meet a scientist who has created an android for space exploration. Yet, the android named Ulysses falls for the PR agent as she shows him the ideas of humanity including love. It’s a stylish and offbeat comedy that features John Malkovich in the dual role of the emotionally-repressed scientist and the android Ulysses as he proves to hilarious in the latter as he tries to understand the ideas of humanity as his creator has trouble trying to connect with humanity. 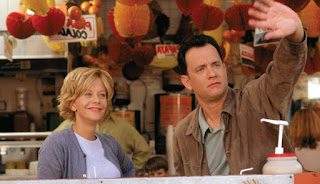 An updated remake of The Shop Around the Corner comes a charming and delightful romantic-comedy from Nora Ephron starring Tom Hanks and Meg Ryan as two people who can’t stand each other when they meet yet are unaware of their own presence online through AOL (anyone remembers that?) It’s an inventive film that play into some of the early ideas of online dating and chatting as it also funny. The film also succeeds in having a rich ensemble supporting cast that include Greg Kinnear, Parker Posey, Dave Chappelle, Steve Zahn, and Jean Stapleton as it is a film that still holds up despite the presence of AOL. 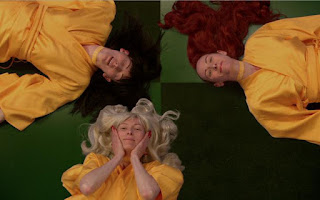 Lynn Hershman Leeson’s 2002 film is a strange gem of a film starring Tilda Swinton as a scientist trying to create artificial life through an android as she ends up creating three as a way to encounter humanity but also love. The androids are also played by Swinton as they all display offbeat personalities but also have a thirst for semen leaving men in horror. It’s kind of an obscure film but worth seeking out mainly for Swinton’s performances.

I've only seen You've Got Mail and I can't believe I didn't even think of it.

I like your theme here! I've only seen You Got Mail but I feel I'm sold on Teknolust now lol

We match with You've Got Mail which is a nice movie. I have not even heard of the other 2 but Making Mr. Right sounds good. I am not sure on the Tilda Swinton film because it might be a bit too weird but i would take a chance:)

I also love your theme! I also love You've Got Mail.. I haven't seen the other two movies. :(

I had definitely expected to see more You've Got Mail this week. It has been ages since I've seen it so it's a movie I want to rewatch

@Sonia-That's OK. We all went with something but I chose to go somewhere else.

@Brittani-Teknolust is a hard film to find but if you're willing to embrace something really weird. I'd recommend it.

@Birgit-Making Mr. Right is a gem of a film as it has John Malkovich in two roles. One where he's overly-serious but the other has him acting like a child of sorts.

@Getter-You've Got Mail is an awesome film and a damn good remake.

@Wanderer-It's a film that gets better with every re-watch.

I love You've Got Mail and probably watch it several times a year. I hadn't heard of Making Mr. Right and Teknolust, but they sound interesting. I'll have to check them out. Nice picks!

@Katy-Making Mr. Right is a sort of a typical 80s film but John Malkovich and Ann Magnuson make it so much more while Teknolust is really out there but fun.