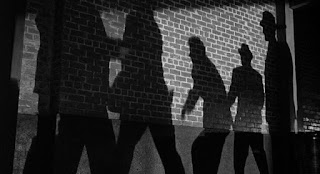 Based on articles from the 1956 editions of The Saturday Evening Post by Joseph F. Dinneen, Underworld U.S.A. is the story of a 14 year-old boy who goes after a group of mobsters who beat his father to death in an act of revenge by infiltrating their gang 20 years later. Written for the screen and directed by Samuel Fuller, the film is a look into the American underworld of the mob where a young boy seeks justice for his father. Starring Cliff Robertson, Dolores Dorn, Beatrice Kay, and Richard Rust. Underworld U.S.A. is a riveting and intense film from Samuel Fuller.

The film follows a twenty-year journey of a 14-year old boy who becomes a man seeking vengeance for the death of his father who was beaten to death by four men prompting him to go into their criminal underworld. It’s a film with a simple premise as it play into a young hustler who witnessed his father brutally beaten as he only saw the face of one of his killers as he would go look for him by becoming a juvenile delinquent and later to prison as a man. Samuel Fuller’s screenplay is largely straightforward in its narrative as much of the first act follows the protagonist of Tolly Devlin (David Kent) at the age of 14 as he had witnessed his father’s murder and gets himself into trouble where he later becomes an adult (Cliff Robertson) where he eventually goes to prison where he would find one of his father’s killers who would give Devlin information that lead to Devlin’s release and his infiltration into the mob where he would also make contact with a FBI agent who is trying to take down the mob himself and do it legally.

Fuller’s direction does have elements of style yet much of his direction is straightforward in terms of the overall presentation. Shot on location in Hollywood and various parts of Los Angeles, Fuller creates a world that seems like a place where nothing is happening but underneath is a dark underworld that is trying to run things and make money off of it. There are some unique wide and medium shots that Fuller uses to establish the locations yet much of his direction is intimate in the conversations he captures with the medium shots as well as the close-ups. Notably as it help play into the drama and suspense where Fuller maintains that sense of dread such as a scene of Devlin hiding in a closet or a very chilling scene in which a hitman goes after a young girl in her bicycle. Fuller also play into this world of authority that is trying to do the right thing as they eventually get Devlin involved by playing a double-agent for them where Fuller show some of its drawbacks as well as the fact that Devlin is a flawed character who is unable to comprehend the idea of life after revenge but also what to do next. Even in the third act where he does make a decision of what to do but is still intent on finishing the job no matter how much it would cost him. Overall, Fuller crafts a gripping and evocative film on a man’s quest for revenge against the men who killed his father.

Cinematographer Hal Mohr does brilliant work with the film’s black-and-white cinematography as it help play into the atmosphere of the locations as well as its usage of shades and shadows to enhance the mood of a dramatic or a suspenseful scene. Editor Jerome Thoms does amazing work with the editing as it help play into the suspense and drama along with some unique rhythmic cuts to help build up some of the suspenseful moments as it is a highlight of the film. Art director Robert Peterson and set decorator William F. Calvert do excellent work with the look of the homes of a few characters as well as the pool that one of the mobsters go to. Costume designer Bernice Pontrelli does fantastic work with the costumes from the suits that the men wear to the dresses that the women wear. The sound work of J.S. Westmoreland is superb for its approach to sound in capturing the sounds of assault and gunfire as well as the atmosphere of the locations. The film’s music by Harry Sukman is wonderful for its sweeping orchestral score that does play into the drama as well as the suspense.

The film’s terrific cast feature some notable small roles and appearances from Joni Beth Morris as a young girl on a bicycle who is pursued because of her father, Robert P. Lieb as the corrupt police chief Fowler, Sally Mills as Fowler’s daughter, Peter Brocco as one of the four men who killed Devlin’s father in Vic Farrar who would confess what he did to Devlin on his deathbed, Allan Gruener and Gerald Milton are fantastic in their respective roles as Smith and Gunther as a couple of mob leaders where one of them is involved in the death of Devlin’s father, Neyle Morrow as a mob henchman in Barney, and David Kent in a superb performance as the 14-year old Devlin who would witness his father’s murder as he is hoping to get his revenge. Richard Rust is fantastic as a mob henchman in Gus Cottahee who does horrific things to get the job regardless of who that person is. Paul Dubov is brilliant as Gela as a top mob boss connected with the mob head in Connors as he finds himself in trouble upon meeting Devlin.

Robert Emhardt is amazing as Earl Connors as a top mob boss who was involved in the death of Devlin’s father as he had become a big-time kingpin unaware of Devlin’s true identity as he is hoping to create so much more in the criminal underworld through legitimate means. Larry Gates is excellent as FBI agent John Driscoll who knew Devlin as a 14-year old as he is trying to take down Connors and his syndicate while also takes Devlin in as a double agent while warning him about how far Devlin would go into. Dolores Dorn is remarkable as Cuddles as Cottahee’s girlfriend whom Devlin saves and later gets her to help him as she thinks about a life away from the criminal underworld. Beatrice Kay is incredible as Sandy as a maternal figure for Devlin as she is also a conscience of sorts as she worries about what Devlin is doing while trying to get him to see a future outside of vengeance with Cuddles. Finally, there’s Cliff Robertson in a phenomenal performance as Tolly Devlin as a man who saw his father killed when he was a teenager as he is eager to get revenge on the men who killed his father as he is also someone with flaws in the way he tries to take everyone down but is unable to think about a life outside of vengeance as well as a future as it is a charismatic and eerie performance from Robertson.

Underworld U.S.A. is a sensational film from Samuel Fuller that features great performances from Cliff Robertson and Beatrice Kay. Along with its supporting cast, simple yet effective script, study of the criminal underworld, dazzling visuals, and other technical high points. It’s a noir film of sorts that explore a man infiltrating the criminal underworld in an act of revenge while is forced to deal with himself and the ideas of life after vengeance. In the end, Underworld U.S.A. is a phenomenal film from Samuel Fuller.

This sounds really interesting, but also familiar. I haven't seen it, I'm sure. However, it feels like I've seen another film with an almost identical plot. I'm drawing a blank. Maybe I'm delusional. Either way, this goes on the watchlist.

I think the films you're thinking about are Infernal Affairs and its remake in The Departed except those 2 films had a criminal pretending to be a cop.

Ah good ol' Sam Fuller and his two-fisted film noirs! I recently discovered this film and ended up getting it on Blu-Ray. His noir films always remind me of the crime fiction of James Ellroy and I'd be curious to know if he was influenced by Fuller's work at all.