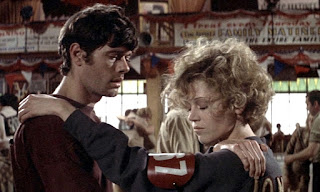 Based on the novel by Horace McCoy, They Shoot Horses, Don’t They? is the story of a people trying to win a dance marathon during the Great Depression with a power-hungry emcee urging them to continue. Directed by Sydney Pollock and screenplay by Robert E. Thompson and James Poe, the film is a study of people who are desperate to win this dance marathon in the hope of winning $1,500 during a troubled time where people are clinging to hope. Starring Jane Fonda, Michael Sarrazin, Susannah York, Bruce Dern, Bonnie Bedelia, Red Buttons, and Gig Young. They Shoot Horses, Don’t They? is a harrowing and evocative film from Sydney Pollock.

The film revolves around a dance marathon during the Great Depression where a group of people attend the marathon in the hopes of winning $1,500 and a better life as they also hope to win the audience. Yet, it’s a marathon that goes on for days and days where it becomes a troubling image of exploitation where people try to stay away and move just to win money. The film’s screenplay by Robert E. Thompson and James Poe has this narrative that features what could be flashbacks or something as it relates to the character Robert Syverton (Michael Sarrazin) who walks into the La Monica Ballroom on the Santa Monica Pier accidentally where this marathon is to begin. Syverton is chosen to partner up with the cynical Gloria Beatty (Jane Fonda) whose original partner is unable to participate due to bronchitis. Other participants including an elderly sailor named Harry Kline (Red Buttons) who is joined by his partner Shirl (Allyn Ann McLerie), the aspiring actress from London in Alice (Susannah York) with her partner in another struggling actor in Joel (Robert Fields), and a farming couple in James (Bruce Dern) and his pregnant wife Ruby (Bonnie Bedelia).

The first act is about the marathon and everything that happens as it is overseen by its emcee Rocky Gravo (Gig Young) who is hoping to make money out of this marathon as the dancers would get sponsorship to keep on dancing hoping they would win. Yet, Gravo has something sinister in making people attend everything and to see who drops out and who stays on that would also include breaks but also the terrifying race around the dancefloor for a period of time where the last three couples are eliminated. It adds to the drama with Beatty wondering why some of these people are there including the pregnant Ruby as she would often question herself. Syverton, who is a reluctant participant, observes everything that is happening as he would also have flashbacks on his childhood while getting some unwanted attention from Alice.

Sydney Pollock’s direction does bear a lot of style as it is shot largely in a soundstage with a few of the exteriors shot at the Santa Monica Pier as much of the film is set in this ballroom. Pollock’s usage of wide and medium shots to get a scope of the entire ballroom is immense yet it is his usage in the latter and close-ups that add to the drama that occur. Notably as much of the action occur is in the ballroom with a few breaks in these rooms where the contestants rest for a where some of the drama occur with Beatty looking around the other women with an air of disdain. Pollock maintains something straightforward in those scenes while including a few strange recurring images of fields as it relates to Syverton as he is seen being interrogated. The behind-the-scenes moments involving Gravo showcase a man who is doing whatever he can to make money and to make the show more interesting so that the people attending this marathon can watch people suffer.

The two scenes involving the race around the dancefloor is definitely the most intense where Pollock doesn’t show the craziness of this moment but also this growing idea of inhumanity as these people are trying to walk around an entire lap and make sure they’re not eliminated. The ones who drop on the floor showcase the horror of these races while the moment they’re dancing and could barely move also add to this inhumanity. Most notably in the third act where Beatty and Syverton briefly break-up and be with other partners as it adds to the growing chaos where they both learn that there’s a lot more at stake. Even as Gravo continues to stir the pot and hope that there’s a winner yet it adds to this growing cynicism that Beatty has as well as revelations for Syverton about the world in general. Overall, Pollock crafts a riveting yet chilling film about a group of people trying to win a dance marathon during the Great Depression.

Cinematographer Philip H. Lathrop does brilliant work with the film’s cinematography with the usage of sepia-like color for a few stylish shots in the flashbacks as well as gorgeous approach to lighting for many of the interiors including low-key natural light for the scenes where the contestants rest. Editor Fredric Steinkamp does amazing work with the editing where it knows when to be straightforward in the dramatic moments while the racing scenes has this air of chaos in its fast cuts as well as bits of slow-motion for dramatic effect. Production designer Harry Horner and set decorator Frank R. McKelvy do excellent work with the look of the dancehall and its many interiors as well as the way the floor is re-painted for the racing scenes. Costume designer Donfeld does fantastic work with the costumes as it play into the period of the times as it includes the gorgeous gown that Alice wears that later goes into ruins to the sweats some of the people wear during the racing scene.

Makeup artist Frank McCoy, along with hair stylists Sydney Guilaroff and Ina Claire, does terrific work with the look of the characters as they sweat and become sleep-deprived while Guilaroff does the look of Beatty and Claire doing the look of Alice. The sound work of Tom Overton is superb for the atmosphere it maintains in the way the crowd sounds as well as how music is presented from afar as well as the sounds of the sea heard from the outside of the building. The film’s music is a wonderful mixture of standards of those times as it adds to the atmosphere while being a major highlight of the film.

The casting by Lyn Stalmaster, James Martell, and Jack Roberts is incredible as it feature some notable small roles from Art Metrano as a dancer who collapses during the first race, Madge Kennedy as an old lady who sponsors Beatty and Syverton, Allyn Ann McLerie as Harry’s partner Shirl, Robert Fields as Alice’s partner in aspiring actor Joel, Al Lewis as Gravo’s right-hand man Turkey, and Michael Conrad as one of the event’s organizers in Rollo. Bruce Dern and Bonnie Bedelia are fantastic in their respective roles as the traveling couple James and Ruby Bates who have done dance marathons before but they’re facing a bigger challenge with the latter being pregnant as the former tries to be supportive but also defensive towards Beatty’s cynical remarks. Red Buttons is excellent as the sailor Harry Kline as an old war veteran eager to win some money as he befriends some of the dancers while dealing with the intense challenges of staying up as well as the race itself.

Susannah York is brilliant as Alice LeBlanc as an actress from London eager to get some attention from talent scouts to appear at the marathon only to deal with stolen items, envy, and other issues as she starts to become fragile. Gig Young is amazing as Rocky Gravo as the organizer and emcee of the marathon who does whatever he can to sell tickets and make money while also playing a devious game of torturing people in the hope he can make some money as it’s a charming yet devilish performance. Michael Sarrazin is incredible as Robert Syverton as a man who accidentally walks into the ballroom where he reluctantly becomes Beatty’s partner as he deals with the chaos around him while in some strange images recounts some things in his life as it’s an understated performance from Sarrazin. Finally, there’s Jane Fonda in a phenomenal performances as Gloria Beatty as a woman eager to win by any means necessary while dealing with the physical, emotional, and mental torment of her desire to win hoping it’s one last chance at doing something where Fonda brings that biting cynicism to play a woman that has lost a lot of hope and is clinging to that last semblance of hope as it is one of Fonda’s quintessential performances.

They Shoot Horses, Don’t They? is a tremendous film from Sydney Pollock that features a great performance from Jane Fonda. Along with its supporting cast, eerie setting, study of human nature and exploitation, and gorgeous visuals. The film is definitely an engaging period drama set during the Great Depression that explore what people are willing to do win money during a dark time in history as well as the lows they have to endure with some trying to milk it for all of its worth. In the end, They Shoot Horses, Don’t They? is a spectacular film from Sydney Pollock.

Hi Steven, I just woke up from a nap and wanted to see what you've been watching. I appreciate your thoughts on They Shoot Horses Don't They... it's been awhile since I've seen that movie and your exciting piece brought back some nice memories. It has to be one of Jane Fonda's best roles and one of Pollock's best films. What a wonderful production, all those cool actors... Gig Young, Bruce Dern, Red Buttons... thank you, Steven, for keeping all these great movies alive by writing about them.

I think Tootsie is the only movie of Pollack's that I've seen. I'm slacking badly. This one has been on the watchlist for years.

@Paula-I heard a lot of things about this film and I'm finally glad I saw it as it is something more people need to see now.

@Wendell-I've seen some of his films in the 1990s as they were good though this is one of his best. I think he was at his best in the 70s and early 80s.

This is my favorite movie of 1969, and would absolutely make my top-10 for its decade. It's such a brutal movie in so many ways. "Unrelenting" is probably a better word for it. The characters all come across as real and three-dimensional and the pain that moves them becomes real as well.

It's Fonda's best work, and I say that as someone who likes her in general.

@SJHoneywell-I still love Jane Fonda and I would love to be her bitch. She's still gorgeous and I'm glad she keeps in touch with Uncle Ted. I hope she likes AEW Dynamite.

The film itself is a big surprise and for all of the right reasons. I thank you for making it a Blind Spot film.

I've been meaning to watch this for ages but haven't gotten to it. I remember it used to be on AMC a lot when I was a kid because the title would always catch my eye.

@Brittani-It's a film that is worth watching as it's one of those movies that is revered for all of the right reasons while it is really this eerie study of inhumanity through a dance marathon where people do whatever it takes for money.