In the 42nd week of 2020 for Wandering Through the Shelves' Thursday Movie Picks as part of this month’s Halloween Edition. We go into the subject of winter/snow horror as it’s a simple subject of horror movies set in the snow or during the winter time. Here are my three picks:

Masaki Kobayashi’s adaptation of folk tales by Lafcadio Hearn is a collection of ghost stories set in different periods in Japan. Kobayashi brings a rich presentation to these four different stories that include a man leaving his poor wife for a governor’s daughter, a woodcutter’s apprentice making a vow to a ghost who killed his master, a blind monk singing to ghosts about a great war, and the film’s narrator having an encounter with a samurai warrior and a ghost while writing these stories. It’s a film that more people need to see not just for its ghost stories but also because of Kobayashi who is known with such praise by film buffs but doesn’t get enough love in comparison to masters like Akira Kurosawa and Yasujiro Ozu. 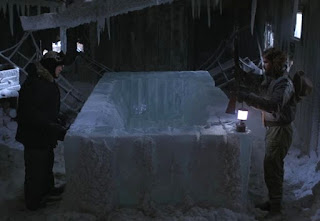 John Carpenter’s horror film set in Antarctica that is based on John W. Campbell Jr.’s novella Who Goes There? is a film that remains probably one of the great horror films ever made. The setting itself is a character while it is all about this mysterious thing that arrives at this station that mutates and then kills everyone where no one knows who to trust. With an ensemble cast that includes Carpenter regulars Kurt Russell and Keith David as well as Wilford Brimley, the film is an intense and mysterious film where no one is sure who to trust and what to do. Especially as they have no idea what this mysterious thing really looks like. 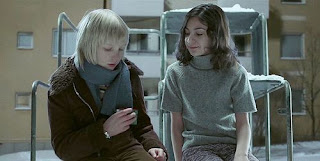 Tomas Alfredson’s adaptation of the John Ajvide Lindqvist novel about a young boy who meets a vampire in early 1980s Sweden is definitely one of the best horror films of the 21st Century so far. Yet, it’s really a love story of sorts between this boy and a young vampire who protects him from his bullies but also has to feed herself. It’s an unconventional vampire movie yet its setting in the winter adds to the visual splendor of the film as well as some of the attacks that occur where there is this air of satisfaction that is needed in the film. It’s a film that anyone who loves vampires need to see.

Three great picks. Kwaidan is one I should probably watch again.

The Thing is very much responsible for me being a fan of horror movies. (Pardon the link, but it explains the story: http://1001plus.blogspot.com/2011/02/best-month-ever-june-1982-part-1.html)

Let the Right One In is a tremendous film, one of the best visions of vampirism I've seen in a long time.

I haven't seen your first two picks but I'm happy to see Let The Right One In get so much love this week! Amazing film.

We match with Let The Right One In which is an excellent film and very much about relationships as well. I did see The Thing way back in the theatre and it was ok..I did laugh when one guys head slimed down and then got feet and scurried away. I haven't seen the first one but it sounds really good.

I need to see Kwaidan. Your other two picks are definitely amazing. I love both of those films.

Great choices, though I haven't seen Kwaidan yet. Heard its pretty masterful

We share The Thing! The only difference is that I wasn't a fan of the film at all.