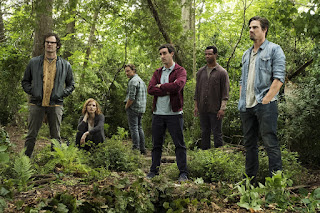 Based on the novel by Stephen King, It Chapter Two is the sequel to the 2017 film that follows the seven kids who had confronted the mysterious clown back in 1989 as they reunite 27 years later to confront him again in the hope that they get rid of him. Directed by Andy Muschietti and screenplay by Gary Dauberman, the film follow these seven kids who return as adults as they deal with their own issues as adults as well as their own demons in the form of the clown known as Pennywise as he is once again played by Bill Skarsgard. Starring James McAvoy, Jessica Chastain, Bill Hader, Isaiah Mustafa, Jay Ryan, James Ransone, Andy Bean, Xavier Dolan, Jaeden Martell, Sophia Lillis, Finn Wolfhard, Chosen Jacobs, Jeremy Ray Taylor, Jack Dylan Grazer, and Wyatt Oleff. It Chapter Two is a chilling though messy film from Andy Muschietti.

The film revolves around events in Derry, Maine where the group of seven kids, who confronted the clown Pennywise, known as the Losers have returned 27 years later following events involving mysterious murders in the town committed by Pennywise. It’s a film that has these adults not only fulfill an oath to return to Derry to defeat Pennywise once and for all but also to confront some demons. Gary Dauberman’s screenplay opens with the beating of a gay couple as one of them would be killed by Pennywise as it leads to Mike Hanlon (Chosen Jacobs as a teenager/Isaiah Mustafa as an adult) to call the rest of the Losers. Dauberman’s script does a lot to establish the stakes and what the Losers must do but some of the execution and plot-pointing unfortunately leads to a messy narrative. Notably in a few flashbacks where some of the losers deal with moments from their past but also blur the idea of whether it’s a memory or a fantasy recreated as their younger selves. It gets confusing while some of the back story about Pennywise’s origins are confusing as well with Hanlon being the one to research everything in how to kill him once and for all.

Muschietti’s direction does have some style in its compositions and approach to suspense while also play into the idea of memory and nightmares. Shot on location at the Manitoba province in Canada with some of it shot in Toronto as Maine and New York City. Muschietti also dwell into the events that these characters have to cope with as he uses wide shots to get a scope of the locations including some of the nightmares they all have to deal with. The medium shots and close-ups that Muschietti uses to play into the interaction with the characters such as their reunion scene at a Chinese restaurant where it starts off fun but then becomes scary. This approach to wanting to be funny, dramatic, and serious is where the film does have tonal issues where Muschietti wants the film to be a lot of things but it never gets a balanced tone while there are other things in the film that never gets fully explained. Notably the character of Henry Bowers (Nicholas Hamilton/Teach Grant) who is aided by the dead body of his friend Patrick (Owen Teague) as that is never fully explained.

Despite the messy elements in the film’s second act where it is bogged down by lots of exposition, Muschietti does manage to get things going for its third act with the climatic showdown between the Losers and Pennywise. It is a grand sequence that has a lot at stake but also forcing people to relieve their nightmares as well as confront their own guilt from the past as children. It is a sequence that has a lot going on while its aftermath does go a bit overlong at times though it’s quaint in comparison to some of the events in the second act. Overall, Muschietti crafts a riveting though flawed film about a group of adults who reunite to destroy a mysterious clown who terrorized them as kids 27 years ago.

Cinematographer Checco Varese does excellent work with the film’s cinematography with its usage of low-key lights for many of the interior/exterior scenes set at night to help maintain the eerie mood of the film. Editor Jason Ballantine does terrific work with the editing as it is largely straightforward with a few stylish cuts to play into the suspense and horror. Production designer Paul D. Austerberry, with set decorators Crystal North and Shane Vieau plus art director Nigel Churcher, does amazing work in not just the look of Derry but also the places the Losers go to as it play into their nightmares. Costume designer Luis Sequeira does fantastic work with the costumes as it is largely straightforward with the Losers wearing casual clothing.

Hair designer Stephanie Ingram, along with makeup designers Alec Gillis and Tom Woodruff, Jr., does brilliant work with the look of a few of the adult characters as well as the look of Pennywise. Special effects supervisor Kristy Hollidge and visual effect supervisor Nicholas Brooks do superb work with the visual effects from the look of Pennywise in his different incarnations to the design of some of the demons the Losers face. Sound designers Erick Ocampo, Randy Torres, and Bill R. Dean, with sound editor Nancy Nugent, do incredible work with the sound as it help play into the atmosphere of the locations as well as sound effects to create some suspense. The film’s music by Benjamin Wallfisch is wonderful for its eerie orchestral score that helps build up some of the film’s suspense and drama while its music soundtrack features pieces from Juice Newton, Cameo, and New Kids on the Block.

The casting by Rich Delia is marvelous as it feature notable small roles and appearances from Stephen King as a pawn shop owner, filmmaker Peter Bogdanovich as himself, Jess Weixler as Bill’s actress wife Audra, Juno Rinaldi and Megan Charpentier in respective roles as the older and younger version of Gretta, Will Beinbrick as Bev’s abusive husband Tom Rogan, Martha Girvin as Stan’s wife Patty, Xavier Dolan and Taylor Frey as a gay couple who are attacked by a gang early in the film with the former being a victim of Pennywise, Molly Atkinson in a dual role as Eddie’s mother and his wife, Luke Roesseler as a young boy Bill encountered in the second act, Ryan Keira Armstrong as a young girl with a strange birthmark on her face, Owen Teague as the dead corpse of Bowers’ friend Patrick, Jackson Robert Scott as Bill’s late younger brother George, and Teach Grant and Nicholas Hamilton in their respective roles as the older and younger version of the bully Henry Bowers with the former being a total psychopath hell bent on revenge towards the Losers. Bill Skarsgard is fantastic as Pennywise as the clown who terrorizes kids though he is hampered by the fact that he’s underused and not much information about who he really is emerges.

Andy Bean and Wyatt Oleff are terrific in their respective roles as the older and younger version of Stan Uris as the former appears briefly as the adult version who is the one person who doesn’t return mainly because he has a plan that would help the Losers with the former being the nerdy Jewish kid who starts to find his own path. James Ransone and Jack Dylan Grazer are superb in their respective versions of the adult and younger version of Eddie Kaspbrak as hypochondriac who still has issues but also comes to terms that he must face Pennywise while also finding a sense of humor. Jay Ryan and Jeremy Ray Taylor are excellent in their respective roles as the adult and younger version of Ben Hanscom as the latter is the fat yet resourceful kid with a crush on Bev while the former is a fit adult who still pines for Bev despite his success as an architect as he is eager to fight Pennywise. Isaiah Mustafa and Chosen Jacobs are brilliant in their respective role as Mike Hanlon as the one person who stayed in Derry to study on Pennywise and how to defeat as he would bring everyone together while figuring out how it could be done.

Bill Hader and Finn Wolfhard are amazing in their respective versions of Richie Tozier with Hader being the comedian who is reluctant to return as he copes with his own issues while he’s still a foul-mouthed and witty person like Wolfhard’s role as the young Tozier. James McAvoy and Jaeden Martell are incredible in their respective versions as the older and younger Bill Denbrough as the former is now a successful author who still has creative issues as he is eager to stop Pennywise while dealing with other issues that he still has as the latter. Finally, there’s Jessica Chastain and Sophia Lillis in a phenomenal performances as their respective versions of the adult and younger version of Bev Marsh with the latter being in a troubled marriage as well as admitting that she has some strange visions that she attained as the former.

The film is super well-made and the cast is stellar. I just wished they hadn't carried so many inconsistencies over from the novel. Normally I don't advocate for changing stuff from the book when a story is turned into a movie, but everything that doesn't make sense in It Chapter 2 was taken straight from the source material.

You are far nicer to this than I am. I don't have a real problem with the casting, but this is a case where I know the source material pretty well, and the film that we have here is such a lessening of it.

I still say the best way to do this is a 10-part miniseries. Or a two-season miniseries, with 10 episodes in each. The original work really is that epic.

This was fine. I have no desire to ever re-watch this one, whereas I bought part one and have watched it several times since.

@ThePunkTheory-Exactly although I had never read the book nor do I have any interest. I wish the maybe cut out some of the material and maybe make something that is 2 hours or something.

@SJHoneywell-If it was told in a limited series, maybe it would work and we wouldn't get that messy tone.

@Brittani-I still prefer part one because I just love that cast and sense of nostalgia for 1989.

I agree with everything you've said here. Part 1 will always be better but my faults with Part 2 are minor, it's a great movie.

@Often Off Topic-Part 1 feels like a film that I could watch over and over again whereas the 2nd part, no so much.