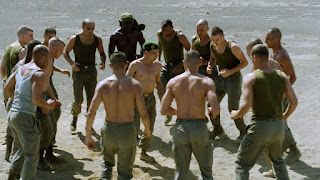 Based on the novella Billy Budd by Herman Melville, Beau Travail (Good Work) is the story of a French Foreign Legion officer who becomes obsessed with a new recruit at a post in Djibouti. Directed by Claire Denis and screenplay by Denis and Jean-Pol Fargeau, the film is a study of obsession and code of honor in the military in a world where men deal with their surroundings as an officer becomes troubled by this new recruit. Starring Denis Lavant, Gregoire Colin, and Michel Subor. Beau Travail is a ravishing and evocative film from Claire Denis.

Set in the country of Djibouti, the film revolves around a group of French Foreign Legion soldiers as they welcome a new recruit who catches the eye of its one of its officer who is troubled by this man’s presence as he does what he can to stop him. It’s a film with a simple premise yet it is more of a character study as it’s told mainly by one of its protagonists in Adjudant-Chef Galoup (Denis Lavant) who is overseeing a group of young soldiers as he trains them and watches over them at night whenever they go into town and have some fun. It’s part of a routine that Galoup likes to maintain as he also spends his alone time writing a memoir or to see a local woman in Rahel (Marta Tafesse Kassa) he spends time with every now and then. Upon the arrival of Giles Sentain (Gregoire Colin), Galoup is upset in Sentain getting the attention of Galoup’s commander in Commandant Bruno Forestier (Michel Subor) who is fascinated by Sentain and his background but Galoup feels like something about Sentain is off as he’s also troubled by Sentain’s beauty and how well he was able to fit in with Galoup’s troops as it adds to the turmoil within Galoup.

Claire Denis’ direction is filled with intoxicating imagery as she creates some unique compositions in the surroundings as it is shot on location Dijbouti. The usage of wide and medium shots add to not just the scope of the locations in the country including its deserts and mountains but also the areas in the city as it play into this post-colonial world where all of these soldiers from different parts of the world are trying to be part of an elite group of soldiers. Yet, Denis does give the film some perspective from the locals as they see the Foreign Legion either with some disdain or curiosity as they’re seen training and doing these intense physical obstacles. Most notably these moments of exercising that is choreographed by Bernardo Monet to the music of Benjamin Britten’s opera for the Melville novella of the same name. There are some close-ups that Denis creates as it plays more into the sense of physicality in the training as well as some of the homoerotic tension that occurs in the way Galoup sees his commander towards Sentain as he is this object of beauty that is unlike anything.

Denis also play up to the tension by not showing anything that is typical of films that demand some kind of physicality in intense fight scenes. There’s only bits of it as it’s more of a study of wit but also repressed desire as it play into Galoup’s own issues as much of the film is told in a reflective narrative with scenes of him in Paris. It adds to this dream-like narrative where Denis also employ a lot of long shots where the camera gazes into a simple game of chess or a scene where Galoup is dealing with Sentain as if they want to fight. The film’s climax relates to what Galoup does to Sentain and its aftermath as it plays into this act of repression as well as this penultimate scene that has Galoup in Paris as it plays into something ambiguous about his identity and his actions that lead to his own downfall. Overall, Denis crafts a riveting and hypnotic film about a French Foreign Legion officer’s troubled obsession towards a new recruit.

Cinematographer Agnes Godard does phenomenal work with the film’s naturalistic yet mesmerizing cinematography as she shoots everything with natural lighting for many of the scenes in the day as well as using available lighting for the scenes set at night including the nightclubs. Editor Nelly Quettier does excellent work with the editing as it is largely straightforward with a few rhythmic cuts for the exercise scenes. Production designer Arnaud de Moleron does brilliant work with the look of the fort that the Legion lives in as well as some of the places in the city that they go to. Costume designer Judy Shewsbury does fantastic work with the costumes from the uniforms, underwear, and such that the Legion wears to the colorful clothing of the locals.

Sound editor Christophe Winding does superb work with the sound in capturing the atmosphere of the locations as well as a major sound effect for a key scene in the film as well as the atmosphere of a club. The film’s music by Eran Tzur and Charles Henri de Pierrefu is wonderful for its low-key orchestral score that is mainly driven by strings as it doesn’t go for bombast in favor of ambiance while the music soundtrack that include Benjamin Britten’s opera Billy Budd as well as music from Neil Young & Crazy Horse, Franky Vincent, Corona, Tarkan, Oliver N’Goma, and Abayazid Ali Dahablii.

The casting by Nicolas Lubin is terrific as it feature some notable small roles from Richard Courcet and Nicolas Duvauchelle as a couple of Legionnaire soldiers and Marta Tafesse Kassa as a local woman that Galoup sees every once in a while. Michel Subor is incredible as Commandant Bruno Forestier as a wearing commander who lives outside of the fort as he is someone that had seen a lot yet becomes fascinated towards Sentain. Gregoire Colin is remarkable as Gilles Sentain as a new recruit who joins the Foreign Legion as he is this object of beauty that manages to be someone kind-hearted and does what he can to help out everyone yet is troubled by Galoup’s presence. Finally, there’s Denis Lavant in a phenomenal performance as Adjudant-Chef Galoup as a Foreign Legion officer who runs a section as he devotes his life to the Legion and to his commanding officer as he becomes unhinged by Sentain’s presence as it plays into repressed homosexuality and desire to the point that he does what he can to break Sentain in any way as it is this quiet and reserved performance from Lavant.

Beau Travail is a tremendous film from Claire Denis that features great performances from Denis Lavant, Gregoire Colin, and Michel Subor. Along with its riveting music soundtrack, ravishing visuals, gorgeous location settings, and its themes of identity and devotion. It is a film that explores a lifestyle and a man being threatened by the presence of someone new to maintain his flawed ideals. In the end, Beau Travail is an outstanding film from Claire Denis.

Wow! A commenter by the name of Joel Knox was just talking about Beau Travail on my post about female cinematographer. Sounds really intriguing, Claire Denis really can tackle so many genres! Not all of her films appeal to me though, I've only seen Chocolat.

I'm glad it worked better for you. I watched it last month and it bored me to death. The cinematography is beautiful, I'll give it that. Great review though!

@Ruth-This is the first film of Denis that I've seen though I have been familiar with her name. I'm aware of the fact that she makes different kinds of films but this was just astonishing as I just love the way she frames things as I can see where Greta Gerwig got some of her visual ideas.

@Sonia-Sorry it didn't work for you. I think it worked for me because it didn't play into the conventions you would associate with Hollywood films as I like films that do take their time and do things slowly as it allows me to get an idea of what is going on.

I haven't seen this but I'm really intrigued after reading your review.

@Brittani-I will warn you that it's slow (but then again, a lot of European films start off slow for me but I find it refreshing in comparison to other films we have right now) yet it is still this immense character study while it should be noted that it is based on a novella by Herman Melville but goes left field as it also focuses on some of the post-colonial aspects of Djibouti.