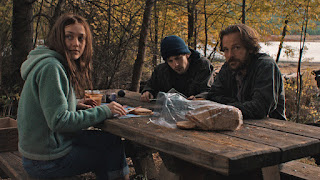 Directed and edited by Kelly Reichardt and written by Reichardt and Jonathan Raymond, Night Moves is the story of two radical environmentalists and a former marine who plan to blow up a dam as they deal with their planning as well as what would happen afterwards. The film is an exploration of political and social actions involving three people who believe in something as they later question what they’re doing as well as its aftermath. Starring Jesse Eisenberg, Dakota Fanning, Alia Shawkat, Katherine Waterston, Logan Miller, Kai Lennox, James LeGros, and Peter Saarsgard. Night Moves is a haunting and evocative film from Kelly Reichardt.

The film plays into two young environmentalists who are both radicalized by the movement as they turn to a former marine in creating a bomb to blow up a dam near a river in Oregon. Yet, it is the aftermath of the event that would trouble them as it play into the fallacies of not just the radicalism but also revelations about what happened. The film’s screenplay by Kelly Reichardt and Jonathan Raymond essentially has a two-act structure where the first half is about the planning and the event that lead to blowing up this dam while its second half is about the troubling aftermath. Yet, the script does explore these two young people who feel like the world is in trouble and believe that this act in blowing up a dam will be good for the environmental cause as they turn this former marine who also has a record as he knows what to do. While the character of Harmon (Peter Sarsgaard) doesn’t entirely agree with their views, he does believe that both Josh (Jesse Eisenberg) and Dena (Dakota Fanning) have a point about the ways of the world which is why he helps them.

It’s the film’s second half that really play into this aftermath where something did go wrong as it relates to what happened and the fact that someone was at the dam when it blew up. Harmon tells both Josh and Dena that they should keep their mouths shut and not contact each other or say anything. Yet, things do go wrong with Dena becoming uneasy and Josh convinced Dena is going to say something. It adds to this struggle as well as the fact that Josh’s own livelihood is at risk since he works and live at a farm while Dena works at a spa. The narrative focuses more on Josh’s paranoia and Dena’s growing guilt as it relates to the second half of the film.

Reichardt’s direction is entrancing for much of the imagery that she creates as well as this air of realism that occurs into the world of radicalism. Shot on location at southern Oregon with the actual dam in the Galesville Reservoir at the Klamath Mountains, the film does play into a world that is bit disconnected from the world of the cities where Josh works in this farm that is bit of a community of its own with Dena working at a spa yet is someone that supposedly comes from a rich family. Much of Reichardt’s compositions are straightforward as it play into the planning of the first half of the film with its usage of medium shots and close-up to play into the characters interacting or dealing with some kind of crisis. There are some wide shots to establish some of the locations yet Reichardt prefers to focus on the characters as she play into the preparedness of their plan and how they try to isolate themselves and not look suspicious. The scene of planting the bomb is also tense in the three trying not to be seen as there’s a wide shot of a car stopping near the dam.

Also serving as the film’s editor, Reichardt doesn’t aim for style but does maintain a slow rhythm to play up the suspense without making it noticeable in order to get a reaction from a characters. Notably in its second half where it’s all about the drama and the aftermath of this bombing where something bad did happen as much of the film focuses on Josh who also believes that some of his fellow farmers might know what he has done. Reichardt’s compositions add to the sense of paranoia but also chooses to create scenes where audiences can get an idea of what is happening but not show anything. Notably in its climax that is followed by an aftermath that plays into uncertainty for a key character in the film but also a decision that forces that person to start a new life or continue to move without any direction. Overall, Reichardt crafts a mesmerizing and eerie film about two radical environmentalists and a former marine bombing a dam and then deal with its troubling aftermath.

Cinematographer Christopher Blauvelt does brilliant work with the film’s cinematography with its emphasis on low-key yet natural lighting, usage of available light for the scenes at night, and other lighting schemes to maintain air of realism into the look of the film. Production designer Elliott Hostetter, with set decorator Virginia Yount and art director Almitra Corey, does excellent work with the look of the boat that Dena and Josh bought as well as the house Josh lives in and the spa that Dena works at. Costume designer Vicki Farrell is terrific for the casual look of the characters that include winter hats, flannel, and jeans to play into the world they live in.

Sound editor Julia Shirar and sound designer Kent Sparling do amazing work with the sound as it help play into the atmosphere of the locations as well as how the characters sound from afar as well as some of the sparse aspects of the sound on a certain location. The film’s music by Jeff Grace is wonderful for its mixture of ambient, folk, and country that play into its suspense and its setting while music supervisors Lyle Hysen and Chris Swanson provide a soundtrack that features a mixture of folk, country, ambient, and indie rock from A Place to Bury Strangers, Coliseum, Sun Rai, and Bear in Heaven.

The casting by Mark Bennett and Laura Rosenthal is superb as it feature some notable small roles from James LeGros as a feed farm factory clerk, Kai Lennox as a hiking camper that annoys Harmon, Dena, and Josh, Katherine Waterston and Barry Del Sherman as the farm owners that Josh works for, Logan Miller as a young farmer who often says dumb things, and Alia Shawkat as a farmer named Surprise that Josh is friends with. The trio of Peter Sarsgaard, Dakota Fanning, and Jesse Eisenberg are incredible in their respective roles as Harmon, Dena, and Josh as they all maintain a low-key and reserved performances in their respective roles. Sarsgaard adds a weariness and gravitas to his role as a man that knows what to do but is also someone who is aware of the stakes. Fanning’s performance has this air of urgency as someone who is determined to do this mission but starts to unravel following the aftermath as she becomes consumed with guilt. Eisenberg’s performance is one of restraint as someone that is determined to do the deed but becomes paranoid following its aftermath as well as being unsure of what to do as he too is consumed with guilt.

Night Moves is a phenomenal film from Kelly Reichardt featuring great performances from Jesse Eisenberg, Dakota Fanning, and Peter Sarsgaard. Along with its ensemble supporting cast, gorgeous visuals, and its restrained yet eerie tone, the film is a compelling look into a couple of young people who team with a former military officer in creating an act of radical terrorism only to deal with the troubling aftermath and the realities of their ideals. In the end, Night Moves is a sensational film from Kelly Reichardt.

I have only seen Certain Women by Kelly Reichardt and despite the fine performances, I didn't really connect with the film. This one does have an intriguing premise and cast so I might check it out.

@Ruth-This is more of a genre film from Reichardt as she doesn't do genre films as much of her work is less-defined as this is one of her more accessible films but still plays into her exploration of rural American life.