Originally Written and Posted at Epinions.com on 3/11/07 w/ Additional Edits. 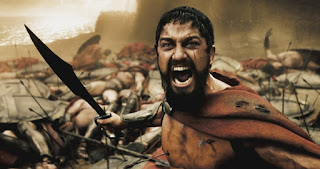 One of the most historical battles ever was the Battle of Thermopylae where a million Persians fought against several groups of small armies during the Persian war. One of those armies was a group of 300 soldiers from the Greek state of Sparta known as the Spartans. Fighting the Persians to the death, the Spartans fought with such might that despite being dead to the last man, they did however weaken the Persians. Despite this setback, the story of the Spartans and their king Leonidas was legendary. In 1998, comic book writer Frank Miller, known for his Sin City graphic novels, collaborated with illustrator Lynn Varley for a graphic novel of this legendary battle which he called 300. The cult success of the graphic novel was huge that after Miller's recent success of the first Sin City film with Robert Rodriguez. He was approached to be involved for another adaptation of his work for 300.

Directed by Zack Snyder with he a script he co-wrote with Kurt Johnstad and Michael B. Gordon, 300 tells the legendary story of the Spartans and King Leonidas fighting against Xerxes and his Persian army. Using the same visual technique that was done for Sin City and with Miller's involvement, Snyder brings a visual interpretation true to Miller's vision as well as his graphic, violent style. Starring Gerard Butler, Lena Headey, David Wenham, Dominic West, Michael Fassbender, Rodrigo Santoro, Andrew Tiernan, and Vincent Regan. 300 is a glorious, visually amazing film from Zack Snyder that is true to the brilliance of the Spartans.

Before he became king of Sparta, Leonidas (Eli Snyder at 7/8 & Tyler Max Neitzel at 15) grew up to become a Spartan. An elite army that is known for their high-fighting skills and refusal to retreat or surrender. When he became King Leonidas (Gerard Butler), he leads Sparta with wife Queen Gorgo (Lena Headey) and son Pleistarchos (Giovani Cimmino). Then one day, a Persian messenger (Peter Mensah) arrives to bring a message from Xerxes (Rodrigo Santoro) who wants land and water from Sparta. Leonidas refuses as he and his fellow Spartans kill the messenger and his men. Leonidas decides to call into the council of elder priests and the Oracle (Kelly Craig) for guidance about war against the Persians. Leonidas is refused by law but along with his 300 troops including Captain Artemis (Vincent Regan), his son Astinos (Tom Wisdom), Stelios (Michael Fassbender), and Dilios (David Wenham). Leonidas against the wishes of elders and the Spartan council led by Theron (Dominic West), move forward with his small troops of 300 soldiers as he says goodbye to his Queen.

Upon their way to the area of Thermopylae known as the Hot Gates where they meet a troop of 7000 Greek Thespians led by Daxos (Andrew Pleavin). Daxos is disappointed in the small army Leonidas has but the king insists that his army are born to fight. Along the way, Leonidas meets a deformed, hunchback named Ephialtes (Andrew Tiernan) who wants to join but because of his deformity, Leonidas politely refuses. Back in Sparta, Queen Gorgo learns that if Leonidas is to fall, she needs more troops as a councilman (Stephen McHattie) suggests that the only way to get more troops is to get the support of Theron. The Persians arrive but they underestimate the 300 fighting Spartans as they're beaten badly. Xerxes sends more of his troops including some of his elite men but again, the Spartans continue to stand their ground. Xerxes finally meets Leonidas where he promises wealth and power but the king refuses as he continues to fight the Persians to the death.

Back in Sparta, Queen Gorgo tries to convince Theron for help only to learn of his corruptive ways. In an attempt to talk to the council, she exposes a dark secret to the council. After days of fighting, Leonidas and his Spartans start to lose some soldiers as Leonidas sends Dilios a message to the council for help. Dilios departs while the Spartans leans that Ephialtes has betrayed them in exchanges for riches, women, and comfort from Xerxes. Despite this setback, the Spartans do what they do best against the remaining yet overwhelming large army of Persians as they fight to the last man.

While the film is based on the graphic novel by Frank Miller, like Sin City, Zack Snyder chose to be faithful to the Miller style of dialogue and visual storytelling. Even in its most graphic depiction of violence. Yet, Snyder has created a film that isn't just faithful to Miller's novel but also brings back the legendary tale of the 300 Spartans in the Battle of Thermopylae. While the film's graphic violence and battle sequences aren't clearly for everyone, Snyder and his team create an amazing, dream-like quality that is inspired by Miller's story. Taking the same filmmaking style of Sin City by creating images on bluescreen with not many sets built, the result is truly one of the most visually exhilarating films ever made.

The story, which is based on legends, is truly amazing of how a small army continue to defy something as totalitarian and evil as Xerxes while going against the odds to fight to the death. The subplot of Gorgo's political challenges gives the film a bit of a balance from the action to the dramatic scale in which reveals that women, even a queen can have power in order to help their own land. While the script is really faithful to Miller's stylized dialogue, it's Snyder's direction that really holds it together. Snyder no doubt, wants to make an entertaining and unique film where the battle sequences are just exciting to watch with full adrenaline that gives even the supporting characters moments to shine. Snyder even balances the action with some wonderful drama in Gorgo's story on how she tries to deal with the council. The overall approach in Snyder’s direction and his visual style prove that this film is truly one of the year's best.

Cinematographer Larry Fong creates a wonderfully colorful yet visually stimulating to the film from its bright, sepia color to some of the film's battle sequences along with bits of grain in order to maintain a sense of authenticity to the film. Editor William Hoy brings style to the film, notably in the battle sequences where the frame speeds are slowed to convey the action of the fight. Production designer James D. Bissell and his team of art directors do excellent work in recreating the square hall of the Leonidas home as well as the priests building. Costume designer Michael Wilkinson does great work in creating the look of the Persian uniforms and the dresses of Queen Gorgo.

Visual effects supervisor Chris Watts does amazing work in recreating the look of Sparta with its colorful imagery and the number of Persian soldiers along with the look of graphic violence true to the Miller visual style. Sound designer Derek Vanderhost and sound editor Scott Hecker also do great work in the sound to convey the tense atmosphere and intensity of the battle sequences. Music composer Tyler Bates creates a wonderfully intense score filled with orchestral arrangements mixed in with heavy metal guitar drones to bring excitement to the action as well as momentum. Bates' wonderful score work is dreamy during the dramatic sequences while the battle is just amazing.

Then there's the film's amazing cast that includes such notable small performances from Stephen McHattie, Kelly Craig, Peter Mensah, Eli Snyder, Tyler Max Neitzel, and Giovani Cimmino. Tom Wisdom is great as the young yet energetic Astinos who fights like a warrior while having some great, humorous moments of dialogue with Michael Fassbender as Stelios, who is just as cool and such a bad*ss. Those two together would make one hell of a tag team. Andrew Pleavin is excellent as the cautious Daxos who is willing to fight but is unable to understand the madness of the Spartans. Andrew Tiernan is wonderful as the creepy, deformed Ephialtes whose desire to become a Spartan is only tempted by Xerxes powers after being rejected by Leonidas. Vincent Regan is excellent as the veteran Captain Artemis whose love of being a Spartan and father to Astinos proves to be the heart of a warrior who has more to fight for. Dominic West is excellent as the conniving Theron who seeks power and is willing to do anything to maintain his power in the council.

Rodrigo Santoro has an amazing yet overwhelming presence as the godlike Xerxes who has an exotic look as Santoro really owns the role with such restraint and elegance that it's hard to root against a man like him. David Wenham, who also does the narration, is great as Dilios who is another loyal warrior who is forced to tell the story while having to leave the group he's fought with. Lena Headey is just simply amazing as Queen Gorgo with her enchanting beauty and love for her husband. It's Headey's performance that is truly the most dramatic as she tries to convince the council and Theron while dealing with her role as a woman, who is a lot tougher than she looks. It's a fantastic performance from the British actress who remains underrated in mainstream circles. Gerard Butler gives an awesome performance as King Leonidas where despite being over-the-top, it's worth it to play a character like Leonidas. Butler brings a bit of sensitivity and heart to the character but overall, Butler sells himself as a badass and is a real leader. It's an amazing performance from Butler who should become a star.

While it's not as visually cool as Sin City, 300 is still an amazing, violent, exotic film from Zack Snyder and company. While serious history buffs might not take this film very seriously, it does improve on what previous historical films like  Troy and Alexander failed to do. Plus, it's far more accurate thanks to Frank Miller's novel and how he based his story on legends. After the brilliance of his 2004 remake of Dawn of the Dead, Zack Snyder proves himself to be an amazing director who can belt out great moments of violence and excitement to the audience. In the end, 300 is one hell of a film to go see.

You know, I haven't seen '300' since its theatrical release 4 years ago. I didn't like it much, seeing it more as a repetitive video-game like assault on my senses. But I'm such a different movie watcher today, I feel like giving this another try.


Also, I will be seeing the girly version of '300', 'Sucker Punch', this weekend. It actually looks pretty tight...as leather.

Same here. It's been a while since I've seen the film though I do like Zack Snyder's work.

I too, will be seeing Sucker Punch this weekend although I'm keeping my expectations low.