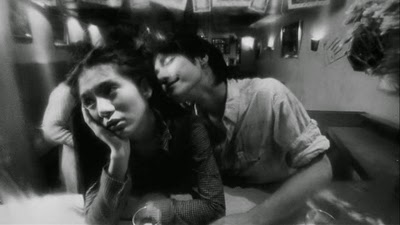 Written and directed by Wong Kar-Wai, Fallen Angels is the story about a disillusioned killer who deals with the affections of his partner while a mute wanders around Hong Kong trying to find his way in live. Set in an urban, neo-noir style, the film is an exploration into two men who both go into different journeys where they finds themselves entangled with the women in their lives. Starring Leon Lai, Takeshi Kaneshiro, Michelle Reis, Charlie Yeung, and Karen Mok. Fallen Angels is a stylish yet rapturous film from Wong Kar-Wai.

The film follows two different strands of narrative both revolving two different men and their encounters with women. One is a hitman who rarely meets his contact as they have a relationship that is professional as the contact has feelings for him yet he’s become tired of his role as a killer. The other story involves a wandering mute who takes on many odd jobs and such while meeting a woman who had just lost her boyfriend to another woman. Though the two narratives would collide briefly, it is all told in very different styles ranging from silent-romantic comedy to gritty film noir. Even in a mixture of the two styles where the hitman Wong Chi-Ming (Leon Lai) meets a strange woman called Blondie (Karen Mok) when he is unable to tell his partner (Michelle Reis) that he wants to terminate their partnership. In the other story, the mute called He Zhiwu (Takeshi Kaneshiro) meets a heartbroken woman named Cherry (Charlie Yeung) as he would listen to her as she is going after a woman named Blondie.

Wong Kar-Wai’s screenplay doesn’t play into any kind of conventional narratives as his approach to voice-over narration showcases a sense of melancholia in the character that revolve throughout the film. Notably as Wong is a man who enjoys his work but all of the killings and his partner’s affections for him have troubled him. His encounter with Blondie is quite off where Wong is confused about the relationship yet it becomes his escape. In the story about Zhiwu, here’s this man-child who only speaks in his voice-over narration as he likes to do all sorts of things where his encounter with Cherry has him dealing with love for the very first time. It’s a story that plays into the idea of love in all of its wonderment and unpredictability. Especially as Kar-Wai would infuse a lot of humor and drama into the story that also includes Zhiwu’s relationship with his father (Man-Lei Chan).

The direction of Wong Kar-Wai is just intoxicating in not just the way he presents Hong Kong in all of its beauty. There’s also this air of looseness that is present throughout the film as it is shot with hand-held cameras where it’s constantly moving but always showcase what is going on. Notably as the camera isn’t shaking where it wanders around as if it is another character in the film where it follows everything that is happening. The scenes involving Wong is presented with some very dark moods in its cinematography where there is that sense of grit in the way the violence is portrayed. The scenes of his contact longing for Wong is quite sensual where it also goes to a bit of extremes to showcase how much she is fond of him.

The direction also has Kar-Wai creates some very stylistic shots that includes scenes of Zhiwu riding on his motorcycle through the tunnels as it is among some of the film’s most entrancing moments along with shots in black-and-white photography that adds a certain element of style. The moments the two narratives collide would be in these small moments where it only serves as developments for these characters to find a way to move on. Especially as its third act would force Wong and Zhiwu to embark into new destinies while also deal with the women in their lives. Overall, Wong Kar-Wai creates a very ravishing yet evocative film about two men dealing with love.

Cinematographer Christopher Doyle does incredible work with the film‘s photography from its use of colored lights for the scenes in Hong Kong in many of its interiors and exteriors as it has a certain mood and style that is just gorgeous to look at in every frame of the film. Editors William Chang and Wong Ming-lam do phenomenal work with the editing as it is very stylized with its approach to frame speeds with its flurry of images fluttering in the film to the use of jump-cuts and montages as it‘s another of the film‘s highlight. Costume/production/makeup designer William Chang does amazing work with the look of the film in its set pieces from the hotels and bars the characters are at to the clothes the women wear in the film along with hair that Blondie has.

Sound mixer Raymond Mok does fantastic work with the film‘s sound from the way gunfire is presented to the atmosphere that goes on in the various locations in the film. The film’s music by Frankie Chan and Roel A. Garcia is superb for its mixture of low-key electronic music with a sense of rhythmic music as its soundtracks a lot of Asian pop music and some electronic music as well as a brilliant cover of Yazoo’s Only You by the Flying Pickets.

The film’s excellent cast includes some notable small performance from Toru Saito as a friend of Zhiwu, Fai-hung Chan as a man Zhiwu forced to eat lots of ice cream, and Man-Lei Chan as Zhiwu’s father. Karen Mok is wonderful as the very kooky Blondie as this woman with big blonde hair who falls for Wong. Charlie Yeung is brilliant as the very upset woman known as Cherry who tries to go after a woman named Blondie while turning to Zhiwu for support. Takeshi Kaneshiro is fantastic as Zhiwu as this mute wanderer who takes in all sorts of odd jobs and sell things illegally while trying to find himself in Hong Kong. Michelle Reis is amazing as Wong’s nameless contact as this woman who rarely meets him yet is in love with him as she starts to fall apart when he starts to disappear. Finally, there’s Leon Lai in a superb performance as Wong as this hitman who becomes disillusioned with his work as he tries to find an escapism while dealing with his own complicated love life.

Wong Kar-Wai Films: As Tears Go By - Days of Being Wild - Chungking Express - Ashes of Time/Ashes of Time Redux - Happy Together - In the Mood for Love - 2046 - Eros-The Hand - My Blueberry Nights - The Grandmaster - The Auteurs #28: Wong Kar-Wai

Fallen Angels was the big surprise for me when I went through most of Wong Kar-Wai's films in 2012. I agree that the directionis just amazing, and I love all the chances that he takes.

I'm just enthralled by it as I've now seen all of WKW's feature films so far for the Auteurs series. I just need to watch some shorts and I can get it done. Right now, this is in my third favorite Kar-Wai film. I need this on Blu-Ray.

Yeah, the unconventional narrative is interesting. From soundtrack I enjoyed Laurie Anderson's "Speak My Language", which somehow fits with the dreamy atmosphere of the film.
Heading over to youtube to listen to Yazoo’s Only You that you highlighted.

@Chris-I think Kar-Wai like Martin Scorsese, Sofia Coppola, Stanley Kubrick, Terrence Malick, and Lynne Ramsay is someone who knows how to put music into a film and make it feel right.