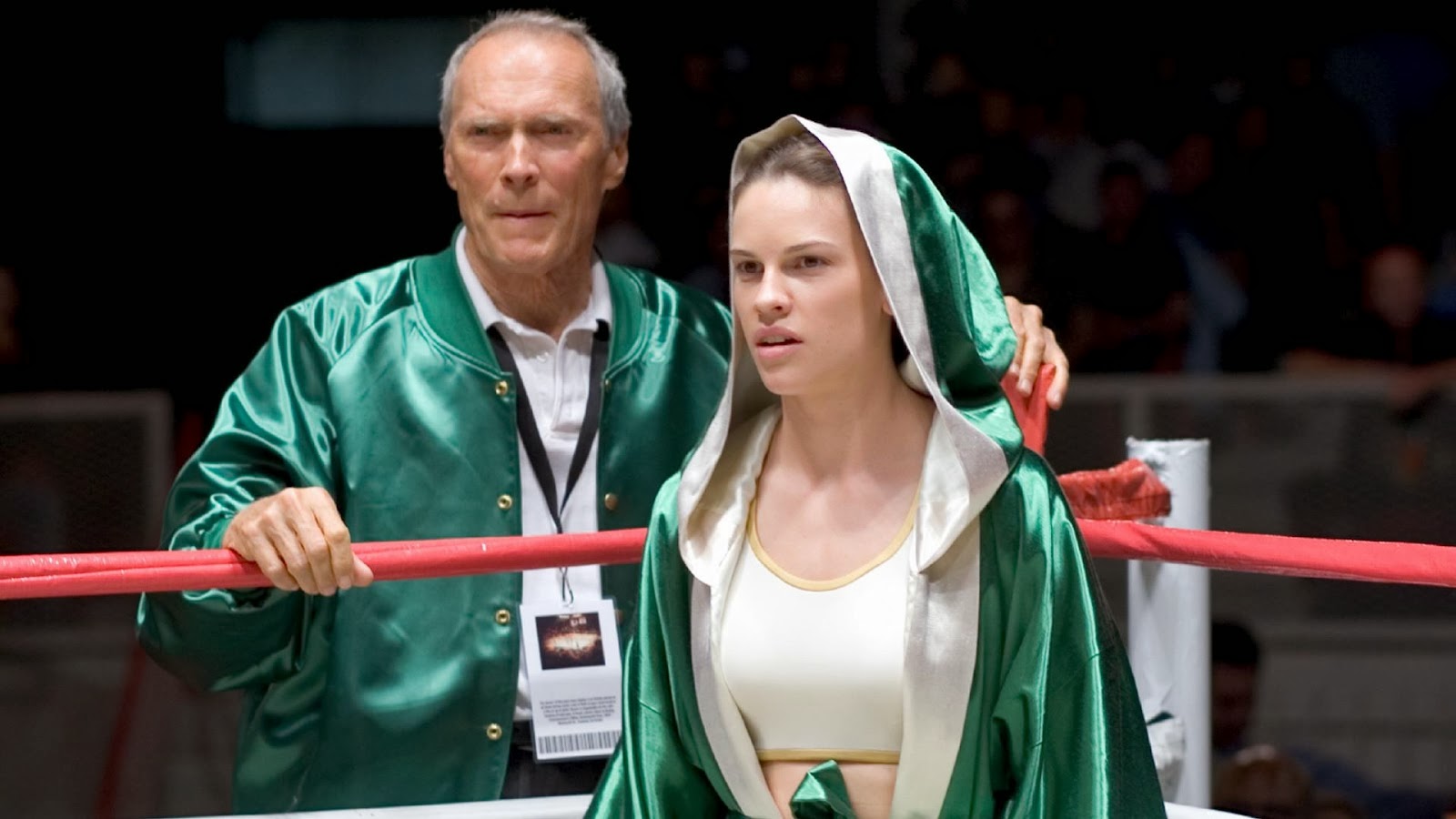 Based on the short stories Rope Burns by Jerry Boyd in his F.X. Toole pseudonym, Million Dollar Baby is the story of a boxing trainer who reluctantly trains a young woman to become a top boxer with the help of a friend as she seeks her dream to fight. Directed and starring Clint Eastwood and screenplay by Paul Haggis, the film is an unconventional boxing film in which a gym owner/trainer deals with setbacks as well as his own demons while finding some redemption in the young woman he would train. Also starring Hilary Swank, Jay Baruchel, Anthony Mackie, Michael Pena, Brian F. O’Byrne, Margo Martindale, and Morgan Freeman. Million Dollar Baby is a rich yet enthralling film from Clint Eastwood.

The film is an exploration into the world of boxing but from a different spectrum as a young woman in her 30s is eager to succeed as it’s the only thing she wants to do while working part time as a waitress. In seeking the help of a gym owner/veteran trainer who often finds himself in situations where he doesn’t take chances that could’ve helped his fighters. Maggie Fitzgerald (Hilary Swank) does manage to sway Frankie Dunn (Clint Eastwood) to train her as she also gets help from Frankie’s friend Eddie “Scrap-Iron” Dupris (Morgan Freeman) who was once a great fighter only to lose his eyesight in one of his eyes. With Frankie helping Maggie to work her way to become a viable contender, Frankie also deals with the wounds in his life as it relates to the family he’s become estranged with as well as the bad decisions he’s made. Yet, the two would find something to fill the void they needed in their lives.

Paul Haggis’ screenplay does have a traditional structure where the first act is about Frankie dealing with the unanswered letters he sent towards his estranged daughter and becoming out of touch with the potential he has for his fighters. Often turning to Father Horvak (Brian F. O’Byrne) for guidance, Frankie doesn’t get the answers he needed until the presence of Maggie showing up to the gym trying to learn to fight forces him to be involved despite his own reluctance. The second act is about the growing bond between Frankie and Maggie in a father-daughter relationship of sorts as Maggie would use her success to give her family from Missouri a good home and money but instead, she gets berated for her generosity by her mother (Margo Martindale). The rejection from her mother would only strengthen Maggie’s relationship with Frankie as he would help her reach the top of the welterweight women’s division.

One aspect of the screenplay that is unique is the fact that is largely narrated by Eddie who watches everything that happens while he looks at the other fighters in Frankie’s gym into whether or not they have the potential to be any good. Eddie’s narration is key to the story where it fills in a few tidbits on the characters while talking about the art of boxing. While the film would be a boxing film for much of the film’s first two acts. It would have a major change in tone into something more dramatic for its third act.

Clint Eastwood’s direction is very low-key and intimate in the way he presents the scenes as he doesn’t go for a lot of wide shots. Instead, he keeps things simple and to the point while creating some unique compositions with medium shots and close-ups to help tell the story. Much of the drama is presented with a sense of simplicity while the boxing scenes do have a flair for style in the way the fights are choreographed and how engaging they can where it would allow the audience to root for Maggie in those fights. Even as it would have shots set outside of the ring to get the reaction from the people watching as well as Frankie watching from his corner as it has this fluidity in the way Eastwood presents the scenes.

While it is largely a drama as it would delve into elements of melodrama in its third act, Eastwood does inject some humor into the role as it is told with such subtlety that includes a scene of Frankie and Eddie talking about the latter’s socks with holes. Eastwood’s approach to balancing humor and drama does add something to the film that where it makes it more than a boxing drama as it it’s also a film about a man finding the void he lost with his own daughter as well as a woman finding the father figure she never had. Overall, Eastwood crafts a very poignant and compelling film about a man helping a young woman become a boxer.

Cinematographer Tom Stern does excellent work with the film‘s cinematography as it has this air of style with tinted-bluish colors while creating some unique lighting schemes in its shadows and such. Editor Joel Cox does brilliant work with the editing where some of it is straightforward while he plays into a lot of cutting styles for the fight scenes. Production designer Henry Bumstead, with set decorator Richard C. Goddard and art director Jack Taylor, does fantastic work with the look of the gym as it‘s a bit grimy as it plays to the world that Frankie and Eddie live in.

Costume designer Deborah Hopper does terrific work with the costumes as it‘s mostly casual while creating some very lovely robes for Maggie to wear when she gets ready for a fight. Sound editors Lucy Coldsnow-Smith and Alan Robert Murray do superb work with the sound from the way punches sound to the sound of people cheering in the boxing halls. The film’s music by Clint Eastwood is amazing for its eerie yet plaintive score as it is mostly low-key with its emphasis on acoustic guitars and lush string arrangements as it includes additional pieces by Kyle Eastwood and Michael Stevens.

The casting by Phyllis Huffman is incredible as it features some notable small roles from Mike Colter as a fighter Frankie trained who would leave him for a shot at the title, Michael Pena as a fighter who often trains at the gym, Anthony Mackie as a brash fighter, Riki Lindhome as Maggie’s white-trash sister, and Lucia Rijker as a German fighter Maggie goes after as she is known for her brutish style. Margo Martindale is excellent as Maggie’s mother who is only more concerned about living on welfare and take whatever money she has from Maggie than supporting her. Jay Baruchel is terrific as a young wannabe fighter in Danger Barch as a kid who has a lot of enthusiasm despite his lack of talent. Brian F. O’Byrne is superb as Father Horvak as a priest who doesn’t really like Frankie yet gives him some advice on the issues he’s dealing with.

Morgan Freeman is marvelous as Eddie “Scrap-Iron” Dupris as a former boxer who watches over the gym with Frankie while being the conscious of sorts in the film as he also looks at fighters who he felt could have potential including Maggie. Hilary Swank is remarkable as Maggie Fitzgerald as a woman in her 30s who just wants to make it as a boxer and win fights while wanting to get the approval of her mother only to find a father-figure in Frankie as Swank has great rapport with Eastwood. Finally, there’s Clint Eastwood in a tremendous performance as Frankie Dunn as man dealing with many issues as he finds the spark of life in Maggie who would give him the chance to find some redemption as he becomes troubled with his own estranged relationship with his daughter.

Million Dollar Baby is a phenomenal film from Clint Eastwood that features absolutely superb performances from Eastwood, Hilary Swank, and Morgan Freeman. Not only is it a boxing film with substance but also a drama that explores a man finding a lost void in a woman who would become a daughter to him. In the end, Million Dollar Baby is a spectacular film from Clint Eastwood.

I really love this film. I know that it gets a lot of heat from people who think it was undeserving of the Oscar, or because they feel Swank was undeserving, but this is easily Eastwoods best film and such a marvelously crafted film.

Any film that wins the Oscar always gets heat. Sure, there were better movies that came out that year but this is one of the films that actually deserved accolades. It's a fucking good movie.

Great review. I love this damn film, probably my favorite Eastwood film. I truly never grow tired of it.

@Alex Withrow-Thanks. It's one of my favorites of his though I think The Unforgiven is his best film as I hope to review that soon as I have his Iwo Jima films to do some re-writes on.