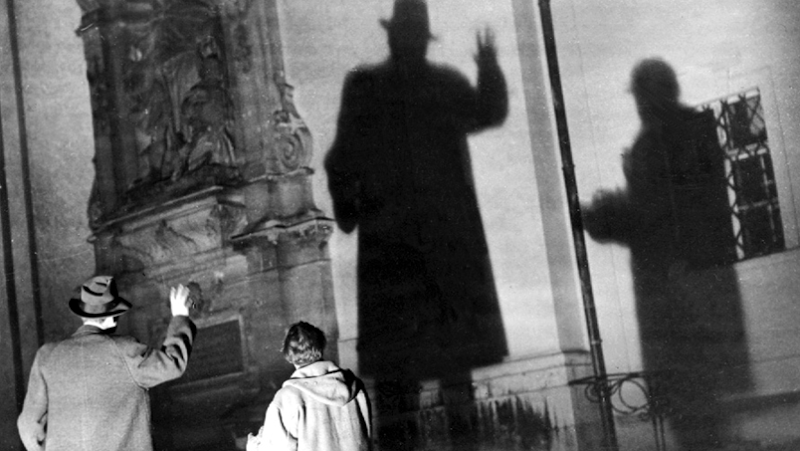 Directed by Carol Reed and written by Graham Greene from his own novel, The Third Man is the story of a pulp writer who goes to postwar Vienna where he tries to find out who killed a friend of his as it takes him to dark places. The film is a mystery that takes place in the world of the black markets where it explores all sorts of things in a world that is coming out of World War II. Starring Joseph Cotten, Alida Valli, Trevor Howard, and Orson Welles. The Third Man is a gripping whodunit from Carol Reed.

Set in postwar Vienna where the city is under occupation following World War II, a pulp writer arrives to the city to meet a friend only to learn that he has been killed. Yet, many questions have arisen for Holly Martins (Joseph Cotten) who wondered if the death of his friend Harry Lime (Orson Welles) is an accident or was it murder as he questions a woman named Anna Schmidt (Alida Valli) who is Harry’s girlfriend while he is being questioned by the British officer Major Calloway (Trevor Howard). It’s a film that doesn’t just explore the mystery of a suspicious murder but there’s something more as it concerns the black market in postwar-occupied Vienna as well as other things where Holly isn’t sure who to trust. Especially as the people Harry were connected to are men from different sectors of the city as they all want to make money and leave people who needed things like penicillin be left aside.

Graham Greene’s screenplay has this unique structure where the first half is about who killed Harry Lime as Holly Martins meets various people who may know something as well as those who may have clues into what really happened. Yet, the script has Holly wondering if he really knew Harry as he becomes concerned for Anna who wants to know what happened to Harry as well yet she is also very cagey about what he does and the men he works with. The film’s second half becomes much more eerie where Holly not only learns about Harry but also the line of work that he does and the identity of the third man who had carried Harry’s body. Though Major Calloway starts off as an antagonist in the film’s first half, he becomes the only person that Holly can trust as Calloway’s motivations to find the truth forces Holly to do what he feels is right.

Carol Reed’s direction is very stylish in not just the way he presents the mystery and drama but also the air of suspense that he brings. Some of which involves some slightly-slanted camera angles that adds to the air of style but also some ambiguity into the world that the characters are in. There’s also some unique framing devices and images that Reed creates such as the way the characters are often seen through a glass window or a glass door as it shows how detached they are from what is going in Vienna. There’s also some very ominous scenes set in the Viennese sewers where it would play into this climax over the third man as it is a moment that is thrilling but also filled with terror as it is told with such style. Overall, Reed crafts a very smart and engrossing film about a man trying to find out about his friend’s death and what got his friend killed.

Cinematographer Robert Krasker does incredible work with the film‘s black-and-white photography where many of its nighttime scenes has this amazing array of lights and shadows to create an atmosphere that is very chilling as the climax in the sewers just adds to that dark atmosphere as it‘s one of the film‘s major highlights. Editor Oswald Hafenrichter does excellent work with the editing in creating some unique montages for some of the film‘s climax along with some methodical cuts to help build up its suspense. Art director Vincent Korda and set decorator Dario Simoni do fantastic work with the set pieces from the apartments Holly goes to as well as the military building Major Calloway works at.

Sound editor Jack Drake does superb work with the sound work that goes on in the film as it is very effective to play into the film‘s suspense and drama. The film’s music by Anton Karas is brilliant with its offbeat use of the zither as it is very playful in its approach to the music that is odd yet it is so intoxicating to listen to as it‘s another of the film‘s highlights.

The film’s wonderful cast includes some notable small roles from Paul Horbiger as a porter who knows some answers about Harry’s murder, Siegfried Breuer as a man who carried Harry’s body on the night he was killed, Ernst Deutsch as the mysterious Baron Kurtz who also carried Harry’s body that night, Erich Ponto as the very eccentric Dr. Winkel, and Bernard Lee as the very kind and resourceful Sgt. Paine. Trevor Howard is excellent as Major Calloway as a man who leads the investigation over Harry’s death as he would also go deep into what he learns about Harry’s line of work as he’s a very ambiguous individual who may seem like an antagonist but has motives that makes him more unique.

Orson Welles is great as Harry Lime as this American black markets dealer who is killed over what happened as Welles maintains a low-key presence as it’s a very strange yet very memorable performance from Welles. Alida Valli is amazing as Anna Schmidt as this woman who may know about what Harry does as she remains evasive yet wants to find him as she helps out Holly despite calling him Harry sometimes. Finally, there’s Joseph Cotten in a phenomenal performance as Holly Martins as this pulp writer who writes these genre-based novels as he goes into his own investigation over Harry’s death while learning about the world of the black market as Cotten adds a sense of determination but also a weariness to man who deals with a very complicated world.

The Third Man is a remarkable film from Carol Reed that features great performances from Joseph Cotten, Alida Valli, Trevor Howard, and Orson Welles. Not only is it one of the finest films of the suspense/film noir genre but also a film that explores the world of postwar Europe that is unraveling as it’s trying to enter the second half of the 20th Century. In the end, The Third Man is a spectacular film from Carol Reed.

I caught up with The Third Man last year, and like you, I was impressed with the look of the film, I loved the world Reed created. The characters are also really interesting, and we are sort of detectives ourselves while watching. I'm curious about checking out the director's other work. Deserved the award from Cannes back then.

It's definitely an impressive film as it's also one of the best noir films. I would like to see more of Reed's work with the exception of Oliver! which I can't believe won Best Picture and 2001 wasn't nominated.