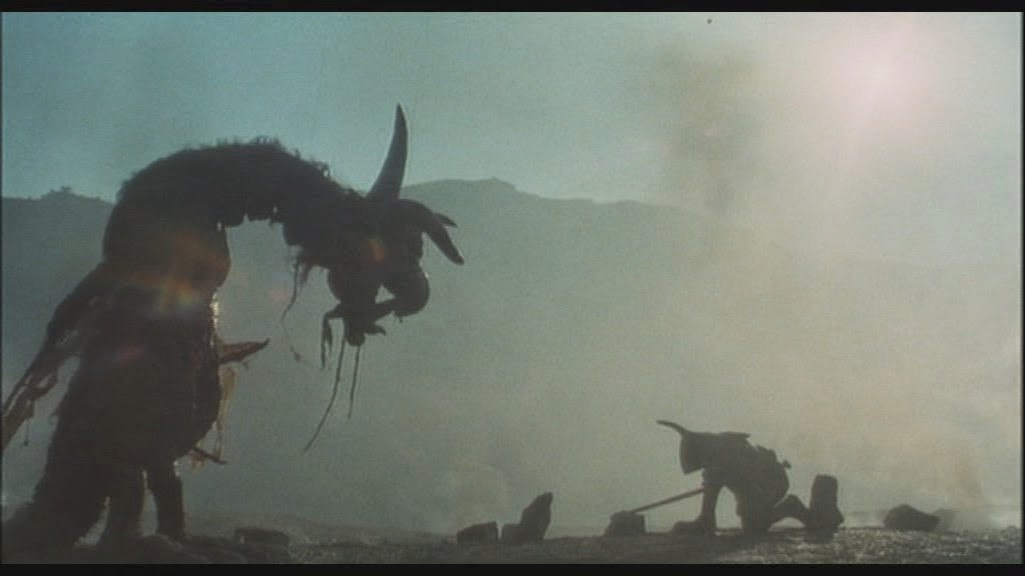 Based on the poem by Lewis Carroll, Jabberwocky is the story of a young cooper’s apprentice who founds himself dealing with a mysterious creature through some very accidental situations. Directed by Terry Gilliam and written by Gilliam and Charles Alverson, the film is a humorous take on Carroll’s poem as it plays Gilliam’s absurd approach to humor as the film stars his fellow Monty Python cohort Michael Palin in the lead role of Dennis Cooper. Also starring Harry H. Corbett, John Le Mesurier, and Warren Mitchell. Jabberwocky is a strange yet witty film from Terry Gilliam.

The film is an offbeat tale about a young cooper’s apprentice who leaves his village to make a new life for himself where he enters the city kingdom through accidental means as he reluctantly becomes a squire and the object of affection for a princess. Yet, the kingdom is still being haunted by the mysterious creature known as the Jabberwocky as merchants and bishops continue to profit from the fear of the creature while its king (Max Wall) is trying to figure out how to defuse the crisis as he holds a tournament so a champion can fight the creature. It’s a film that is about a lot of things such as a young man’s desire to make a good life for a woman who doesn’t really love him as he does have ideas to improve commerce despite dealing with the indifference of merchants and other people.

The film’s screenplay is very strange where even though it has a simple structure and a story about a young man who accidentally finds himself in situations where he would face the Jabberwocky. It’s a story that is often quite messy as the themes of bureaucracy and commerce are explored where in the former, it involves these merchants who are trying to ensure that the creature stays alive so that money can be made. For the character of Dennis Cooper, he has ideas that he believes can help efficiency in the work place only to cause trouble where some of his accidental encounters puts him in places he didn’t want to be as all he wanted a simple life.

Terry Gilliam’s direction is a bit uneven at times where it’s obvious that he’s trying to refine his vision in what he wants to create. While he does create a lot of strange set pieces and visual motifs that are amazing to watch that includes the climatic appearance of the Jabberwocky. He also tries to infuse a lot of humor that is very eccentric and offbeat that is reminiscent of his work in Monty Python. These elements don’t really mesh together though Gilliam creates some unique compositions and moments that has some dark humor as well as recurring gags that play to the absurdity of the Dark Ages. Overall, Gilliam creates a pretty inconsistent yet entertaining film about a man who unwittingly finds himself facing off a monster.

Cinematographer Terry Bedford does excellent work with the grimy photography style for much of the film‘s exteriors with its smoke and fog as well as the lighting schemes in the castle interiors. Editor Michael Bradsell does nice work with the editing as it‘s mostly straightforward with some rhythmic cuts for its humorous moments. Production designer Roy Forge Smith and art director Mily Burns do fantastic work with the set pieces from the castle the king and his people live in as it‘s in ruins to the merchant homes and pubs surrounding the castle. Costume designers Charles Knode and Hazel Pethig do fine work with the period costume as it‘s often ragged at times as well as the look of the king.

The hair/makeup work of Elaine Carew, Scott Rakison, and Maggie Weston do terrific work with the look of some of the characters in their ragged look. Monster creators Clinton Carvers and Valerie Charlton is superb for its imaginative look as it‘s terrifying but also strange. Sound recordist Garth Marshall does amazing work with the sound from the use of sound effects and the way the creatures sound. The film’s music consists of pieces by Modest Mussorgsky, Hector Berlioz, and Jacques Ibert is brilliant as it plays to the humor and horror that occurs in the film.

The film’s cast features cameo appearances from director Terry Gilliam as well as fellow Python cohorts Terry Jones as a poacher and Neil Innes as a herald late in the film. Other notable small roles include David Prowse in a dual role as two knights in the Red Herring and the Black Knight, Bernard Bresslaw as a landlord, Alexandra Dane as the landlord’s wife, John Bird as the first herald who annoys the king and his council, Derek Francis as the bishop, Paul Curran as Dennis’ father, Harry H. Corbett as a mischievous squire, and Deborah Fallender as the princess who mistakes Dennis as a prince.

Annette Badland is funny as Dennis’ dismissive girlfriend Griselda while Warren Mitchell is terrific as her father who agrees with Dennis’ ideas about commerce. Max Wall is excellent as the aloof king who tries to figure out what to do while John Le Mesurier is fantastic as his chamberlain who aids him in how to defuse the situation. Finally there’s Michael Palin in a marvelous performance as Dennis Cooper as a young man just wanting to make something of himself as he deals with a new world as well as accidental situations that has him baffled about his place in the world.

Jabberwocky is a good though meandering film from Terry Gilliam. While it features a funny performance from Michael Palin and some cool visual moments that Gilliam would refine in his later work. It’s a film that wants to be all sorts of things but doesn’t mesh together with the themes that Gilliam wanted to explore with humor. Still, it has moments that are enjoyable and witty. In the end, Jabberwocky is a messy though decent film from Terry Gilliam.

When I saw that picture somehow I knew it'd be from a filmmaker like Terry Gilliam, ahah. This sounds interesting, I've only seen a few of Gilliam's works w/ hit and miss results, but I like The Imaginarium of Doctor Parnassus.

Well, it is his first solo feature film though it is a mess. Still, it's an interesting one though it pales to the classics he would make. I have a few more films of his to see as he will be my Auteurs subject for October.

Great post. Terry Gilliam is a very unique director. His films are weird as fuck.

@Brittani Burnham-Thanks. They are weird but certainly enjoyable.