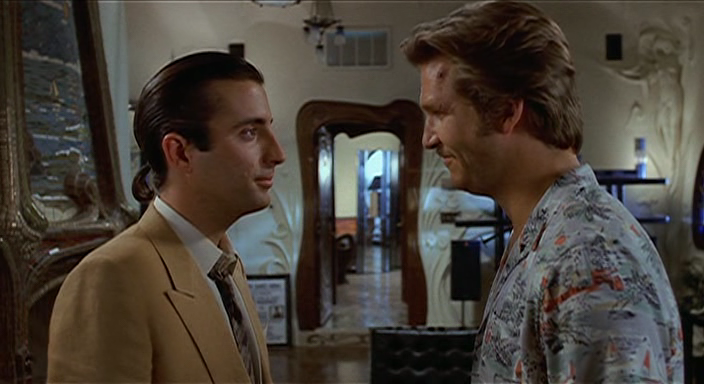 Based on the novel by Lawrence Block, 8 Million Ways to Die is the story of a guilt-reddened sheriff who tries to save a hooker from a drug dealer who killed one of her friends. Directed by Hal Ashby and screenplay by Oliver Stone and Robert Towne (in his David Henry Lee pseudonym), the film is a detective thriller that explores the world of high-stakes drug-dealing while a detective deals with his alcoholism and other issues. Starring Jeff Bridges, Rosanna Arquette, Alexandra Paul, Randy Brooks, and Andy Garcia. 8 Million Ways to Die is a gripping though somewhat very conventional film from Hal Ashby.

The film is an exploration of a troubled sheriff who struggles with alcoholism following a botched raid as he goes to a party with a hooker who asks for his protection from a drug dealer only for things to go wrong as he asks one of her friends to help him. In some aspects, the film is about a man trying to find redemption as well as do the right thing where he wants to take down a drug lord’s empire. The film’s screenplay by Oliver Stone and Robert Towne does take its time to explore the struggles of its protagonist Matthew Scudder (Jeff Bridges) as he deals with his sins as the mistakes he makes would cause him to drink as he already lost his family and his job as a sheriff in Los Angeles. Upon going into a blind date with a hooker named Sunny (Alexandra Paul), Scudder gets himself into trouble where he learns that Sunny is being targeted by the drug dealer Angel Moldonado (Andy Garcia) who is dating Sunny’s friend Sarah (Rosanna Arquette) who would later help Scudder to bring down Moldonado whose ambition would eventually cause trouble.

Hal Ashby’s direction does have a lot of interesting compositions which includes a lot of wide shots and medium compositions as well as some interesting angle to play into the film’s suspense and drama. Yet, it lacks the quirky sense of humor and realistic drama that Ashby is known for though he does manage to create some very interesting scenes such as Scudder and Moldonado talking trash to each other outside of Dodgers Stadium. Some of the action is quite intense as well as the way Ashby plays into Scudder’s struggles where he would black out from his drinking. The film would have some unique climax where even though it does play to the convention of crime dramas and suspense films, they do manage to keep things engaging. Especially with the script’s attempts to make things more gripping though it ends on a very conventional note despite the fact that it does play into Scudder’s desire for redemption. Overall, Ashby creates a good though somewhat pedestrian film about a former sheriff trying to take down a drug lord.

Cinematographer Stephen H. Burum does excellent work with the film‘s cinematography with some grainy film stock to play into the film‘s grimy look with some unique lighting schemes for some of the interior/exterior scenes at night. Editors Robert Lawrence and Stuart H. Pappe does nice work with the editing where it plays into some of the rhythm of the film‘s suspense and action along with its dramatic moments. Production designer Michael D. Haller, with art director Mark W. Mansbridge and set decorators Barbara Kreiger and John T. Walker, does terrific work with the set pieces from the Gaudi-inspired home that Moldonado live in to more drab home of Scudder. Costume designer Gloria Gersham does fantastic work with the costumes from the dresses the women wear to the suits that Moldonado wears. Sound editor Samuel C. Crutcher does superb work with the sound from some of the voice montages that plays into Scudder‘s head as well as some of the effects that play into the film‘s climatic showdown scenes. The film’s music by James Newton Howard is brilliant for its electronic-heavy score to play into the film’s suspense and drama as

The casting by Lynn Stalmaster is amazing as it features some notable small roles from Lisa Sloan and Christa Denton in their respective roles as Scudder’s ex-wife and daughter, Wilfredo Hernandez as a drug dealer Scudder would kill early in the film to his own regret, James Avery as a deputy D.A., Vance Valencia as Moldonado’s right-hand man, Vyto Ruginis as Scudder’s former partner, and Tommy “Tiny” Lister as the right-hand man of club owner Chance. Randy Brooks is terrific as a criminal turned gambling club owner/pimp Chance who is trying to become legitimate despite Scudder’s presence as he would later team up with him once he learns what Moldonado wants from him. Alexandra Paul is okay as Sunny as this young hooker who finds herself the target of Moldonado over what she discovers as it’s a character that is often flighty as she would also try to seduce Scudder.

Andy Garcia is brilliant as Angel Moldonado as this very fiery and ambitious drug lord who wants to make it to the top as Garcia manages to do more with a character that could’ve been very conventional yet has a lot of charisma to make him into a very slimy yet cool antagonist. Rosanna Arquette is wonderful as Sarah as this hooker who is also Moldonado’s girlfriend as she struggles with her own vices while helping Scudder take down Moldonado. Finally, there’s Jeff Bridges in an excellent performance as Matt Scudder as this troubled ex-sheriff trying to redeem himself for his actions and fuck-ups by helping a hooker only to find himself in a dangerous world where he has to save some good people and face off against someone like Moldonado.

8 Million Ways to Die is a pretty good film from Hal Ashby thanks in part to the performances of Jeff Bridges, Rosanna Arquette, and Andy Garcia. While it may not have been the way Ashby would’ve ended his feature-film career, it is at least an engaging crime film despite a lot of its conventional elements due to the post-production tinkering of studio executives. In the end, 8 Million Ways to Die is a solid and enjoyable film from Hal Ashby.

Hal Ashby Films: The Landlord - Harold & Maude - The Last Detail - Shampoo - Bound for Glory - Coming Home - Being There - Second-Hand Hearts - (Lookin’ to Get Out) - (Let’s Spend the Night Together) - (Solo Trans) - (The Slugger’s Wife)

I don't think I've seen anything by this director. Boy Andy Garcia looks like a boy in this one, ahah. Might give this one a shot at some point.

Of the films of the 80s that Hal Ashby has done that I've seen. This is one the best of the 80s though it's a very conventional film. I would rather stick to his work in the 1970s since those were his glory days and the films he made in that decade are classics.