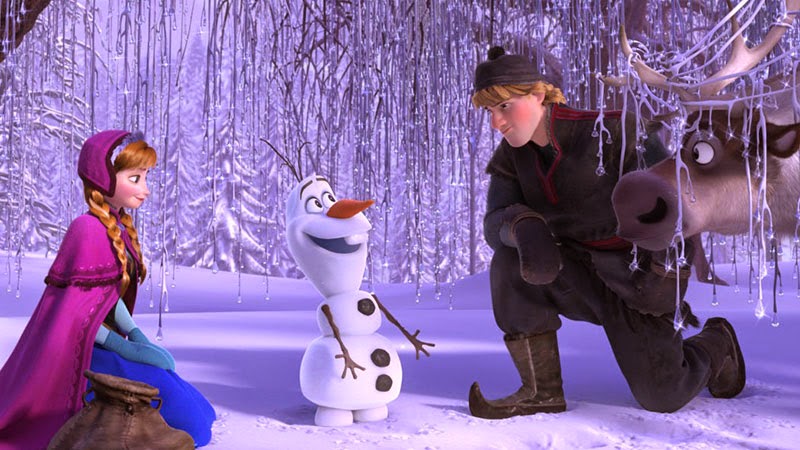 Inspired by Hans Christian Andersen’s fairy tale The Snow Queen, Frozen is the story of a young princess who treks through rugged mountains during a cold winter to retrieve her estranged sister who was responsible for the cold winter through her icy powers. Directed by Chris Buck and Jennifer Lee and screenplay by Lee from a story by Buck, Lee, and Shane Morris, the film is a tale of sisterhood where a young princess tries to save her older sister from herself with the help of a mountain man, a reindeer, and a snowman. Featuring the voices of Kristen Bell, Idina Menzel, Jonathan Groff, Josh Gad, and Santino Fontana. Frozen is a dazzling and heart-warming film from Chris Buck and Jennifer Lee.

The film plays into the relationship between two sisters as the eldest is born with powers to produce snow and ice as she is afraid to hurt her younger sister leading to a schism between the two prompting the younger to get her back home. While it is a film about sisters, it is also a film about love between these two women as the eldest in Elsa (Idina Menzel) wants to protect Anna (Kristen Bell) from herself as she had accidentally hit ice at Anna when they were kids and cut herself off to protect her. Yet, Anna has no memory of that incident as she is confused by their estrangement until they come together for Elsa’s coronation ceremony where problems emerge where Elsa turns the kingdom into ice and isolates herself in her own castle. Anna wants to get Elsa back home with some help yet things become complicated when it is clear how dangerous Elsa has become to herself and to Anna.

Jennifer Lee’s screenplay takes it time to explore the troubled relationship between Elsa and Anna where Elsa’s icy powers are the real problem as they’re forced to live in isolation in their castle for much of their life as they would also deal with the death of their parents separately. When Elsa comes of age to become queen, she has a hard time dealing with the responsibilities that she has to face as well as controlling her powers as she is being exposed to the people in her kingdom. Even as Anna falls for a prince named Hans (Santino Fontana) while a duke (Alan Tudyk) from a neighboring country wants to do business with her only to plot Elsa’s assassination once her powers are exposed. When Anna goes to find Elsa, she gets the help of the mountain man Kristoff (Jonathan Groff), his reindeer Sven, and a living snowman named Olaf (Josh Gad). Yet, the forces such as the Duke of Weselton would try to complicate things as well as Elsa’s own powers as she continuously shuts herself off from the people that really cared about her.

The direction of Jennifer Lee and Chris Buck is truly astonishing not just in its visual setting but also in the animation as it blends hand-drawn animation and 3D computer animation. With its team of animators, the film has this wide canvas to create this land that Elsa and Anna live in as well as what it would look like in the winter time. Much of it involve some wide shots and scenery to play into that world where it includes some unique lighting schemes to play into the mood of the film as Elsa’s emotions is the catalyst for her powers. There’s also some medium shots and close-ups into the way Lee and Buck wanted to frame the characters including some of the elements of love in the way Anna falls for Hans. Some of it is presented in a comical manner as characters like Sven and Olaf are comic figures yet they do help drive the story as it relates to the concept of love and being there for one another.

There’s also some dazzling sequences that play into a sense of action as it’s driven by emotion where the mixture of the animation styles manage to work very seamlessly. Especially in the film’s climax where it plays into the world that the sisters had lived in as well as the forces who want to stop Elsa for their own reasons. Much of the compositions of that sequence as well as what is at stake comes into play as it maintains that theme of love and sisterhood. Overall, Lee and Buck creates a truly exhilarating and touching film about the love of two sisters.

Editor Jeff Draheim does brilliant work with the editing with its use of montages, jump-cuts, and other rhythmic cuts to play into the humor and drama. Production designer David Womersley and art director Michael Giamo do amazing work with the design of the castles and places the characters go to. Sound designer Odin Benitez does fantastic work with the sound from the way ice sounds when it cracks and the way some of Elsa‘s powers are shot from her hands. The film’s music by Christophe Beck is superb for its bombastic orchestral score to play with the film‘s adventurous tone while the songs by Robert Lopez and Kristen Anderson-Lopez is just incredible for the way it helps tell the story as songs like Let It Go, Do You Want to Build a Snowman?, For the First Time in Forever, In Summer, and many others doesn’t just give the film a musical feel but also has more to say as it is a true highlight of the film as the songs themselves are great in their own.

The voice casting by Jamie Sparer Roberts is excellent as it features some notable small voice roles Maurice LaMarche and Jennifer Lee as Elsa and Anna’s parents, Chris Williams as the very funny trading post manager Oaken, Maia Wilson as a troll Anna meets in Bulda, and Ciaran Hinds as an elderly troll in Grand Pabbie who reveals a lot about Elsa’s powers and how she can control it. Alan Tudyk is terrific as the scheming Duke of Weselton who wants to gain power of some of Arendelle’s commerce while planning to have Elsa killed later on. Santino Fontana is superb as Prince Hans of the Southern Isles who woos Anna into being engaged with him as he would try to save her. In the voices of the young Elsa and Anna, respectively, there’s Eva Bell and Spencer Lacey Ganus as the 8 and 12 year old versions of Elsa while Livvy Stubenrauch does the voice of the 5-year old Anna while Katie Lopez and Agatha Lee Monn provide the singing versions of the 5 and 9 year old versions of Anna.

Josh Gad is a total delight as the snowman Olaf as this snowman who wants to experience summertime as well as being a comic relief with some nice commentary about love and its power. Jonathan Groff is amazing as Kristoff as this mountain man who provides ice to Arendelle as he reluctantly helps out Anna with his reindeer Sven, who is a fantastic companion, as he would introduce Anna to the trolls that he had been raised by. Idina Menzel is brilliant as Elsa as this troubled young woman who has powers to create ice as she tries to shut herself off so that she wouldn’t hurt anyone as Menzel also provides a lot of weight into her singing as she makes Elsa a truly engaging character. Finally, there’s Kristen Bell in a remarkable performance as Anna as Elsa’s younger sister who just wants to help and reach out to Elsa unaware of what Elsa can do as Bell’s determination, anguish, and exuberance in her singing just makes Anna a very complex character.

Frozen is a truly outstanding film from Chris Buck and Jennifer Lee as well as the team of Disney Animation Studios. Not only is it a musical that is very soaring with its songs but also with a strong story that can captivate audiences of any age. Especially as it is an animation film that can dazzle cinephiles but also astonish children while having something profound to say about sisterhood and love. In the end, Frozen is a phenomenal film from Chris Buck and Jennifer Lee.

I've made it absolutely clear that I really, truly LOVE this movie. You hit the nail on the head many times in this review. It's a complete package!

YAY! Glad you love this too, Steven! Dazzling and heart-warming is right, it's also very jubilant without being silly. Glad you mentioned the supporting voice cast here too, amazing that it's Alan Tudyk, I didn't know he could do different accent like that. He's awesome!

Good review Steve. It's the kind of movie that's so easy to like, that it's almost annoying. However, it totally isn't and it's totally worth the watch. Regardless of if you're an "old person", or not.

@Fisti-Thank you. I just fell in love with it. It was a way better film than I thought it would be.

@ruth-Alan Tudyk was hilarious. He should be Disney Animations new good-luck charm.

@Dan O.-I think it's a film that manages to be much more as it appeals to everyone.

I don't always love disney animation, I think this one had appeal for children and adults alike. My favorite character is the snowman.

@Chris-Olaf ruled. I thought he was going to be an annoying sidekick but I was wrong. He was a joy to watch. Him and Sven.