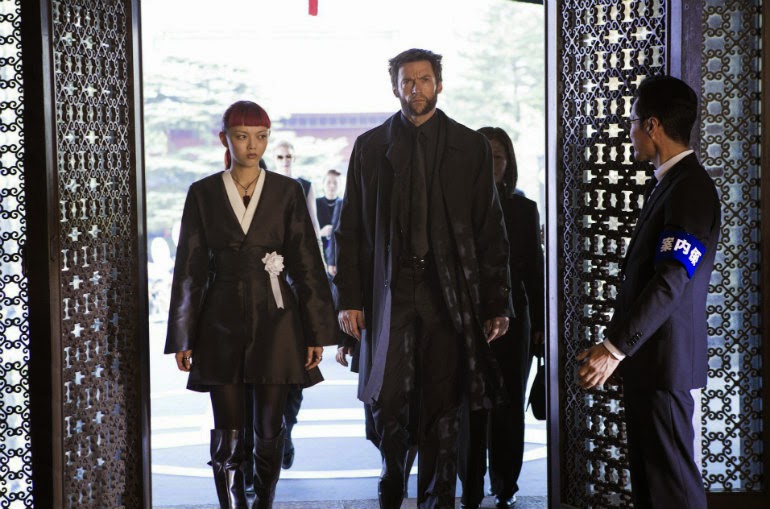 Based on the comic series by Chris Claremont and Frank Miller, The Wolverine is a spin-off film from the X-Men series in which Logan/Wolverine travels to Japan to meet an old friend who offers him the chance to be mortal only to encounter dark forces who want to end him as he also struggles with himself and the guilt over those he lost. Directed by James Mangold and screenplay by Mark Bomback and Scott Frank, the film is a stand-alone film in which Wolverine faces new dark enemies while dealing with the actions he caused in his past as Hugh Jackman reprises his role as the titular character. Also starring Hiroyuki Sanada, Tao Okamoto, Rila Fukushima, Will Yun Lee, Haruhiko Yamanouchi, Svetlana Khodchenkova, and Famke Janssen as Jean Grey. The Wolverine is a smart and compelling film from James Mangold.

The Wolverine is a character that is known famously for his metallic claws as well as the ability to heal himself quite quickly which makes him invulnerable. Yet, the film showcases Logan/Wolverine troubled by guilt over the people he’s lost in his life until he is offered the chance to lose his immortality by an old friend in Japan whose life he saved in Nagasaki during the atomic bombing in World War II. For the Wolverine, he would eventually encounter mortality as it would be difficult to deal with as the visions he had of Jean Grey would also haunt him as he tries to protect his old friend’s granddaughter Mariko (Tao Okamoto) from the Yakuza and those who want her dead over the fact that she would inherit her grandfather’s company. With the help of a mutant named Yukio (Rila Fukushima) who has the power to foresee death, Logan would do whatever it takes to protect Mariko from these forces.

The film’s screenplay does bring in some back story about how Logan met and saved the life of Yashida (Haruhiko Yamanouchi) as Logan’s trip to Japan would have him think about the day and what they encountered. Yet, the film begins with that awful day in Nagasaki as well as Logan’s dreams about Jean and his vows to not hurt anyone ever as he has become a man lost in his grief until Yukio finds him in Alaska as a ragged warrior who refuses to kill or hunt. When he arrives to Japan to meet Yashida, he deals with Yashida’s very angry son Shingen (Hiroyuki Sanada) as well as a mysterious chemist named Dr. Green (Svetlana Khodchenkova) who is also a mutant who is immune to toxins as she is one of the film’s antagonists along with Shingen and Mariko’s fiancée Noburo Mori (Brian Tee) who is a corrupt politician who hopes to marry Mariko for political and financial means. Yet, these individuals all have mysterious ways to immobilize Logan who is trying to protect Mariko from these people as he learns more about her and Yashida while trying to come to terms with his grief and facing mortality.

James Mangold’s direction is pretty stylish in terms of the set pieces and action sequences he creates while taking the time to slow things down so that audiences can get a breather and get to know the characters. Much of the compositions are straightforward in some cases as it includes some close-ups, medium shots, and some wide shots as some of it is in Japan plus some of the locations are in Australia. Mangold keeps much of the dramatic and humorous scenes in an intimate setting while much of the action scenes are quite spectacular such as Logan’s fight with Yakuza members on the bullet train. Yet, the climatic action sequence where Logan fights off against members of the Black Ninja Clan led by Mariko’s longtime friend Kenuichio Harada (Will Yun Lee) and later a mysterious enemy known as the Silver Samurai. While there are some flaws in the film in terms of exposition as well as a few twists, Mangold is able to keep things engaging as he balances a lot of the film’s action with some Japanese mythology on the samurai as well as Logan facing himself and the guilt he had been carrying. Overall, Mangold creates a very entertaining yet captivating film about a mutant trying to find meaning again in his life.

Cinematographer Ross Emery does excellent work with some of the film‘s naturalistic and slightly stylized look for some of the daytime exterior/interior scenes while going for some low-key filters and color scheming for the interior/exterior scenes at night. Editor Michael McCusker does brilliant work with the editing in creating a few montages while keeping things stylish for some of the film‘s action sequences as it doesn‘t deviate to chaotic-editing styles while going for something more straightforward in the dramatic scenes. Production designer Francois Audouy, with set decorator Rebecca Cohen and supervising art director Ian Gracie, does fantastic work with the set pieces from the lavish yet traditional Japanese home of Yashida to the secret home in Nagasaki where Logan and Mariko hide out at.

Costume designer Isis Mussenden does terrific work with the costumes from the Japanese robes as well as some of the stylish clothes that Yukio wears as well as the clothes that Dr. Green wears. Visual effects supervisors Phil Brennan and Nick Pill do superb work with the visual effects in some of the film‘s action sequences as well as the design of the creatures that would infect Wolverine and his immortality. Sound editors John A. Larsen and Donald Sylvester, with sound designers Chuck Michael and Dror Mohar, do amazing work in the sound for its sound effects as well as some of the distortions that it creates whenever Logan starts to feel vulnerable. The film’s music by Marco Beltrami is wonderful for its mixture of low-key electronic music with Japanese percussion music and bombastic string arrangements to play into the suspense and action.

The casting by Lisa Beach, Priscilla John, Sarah Katzman, Jessica Kelly, Yoko Narahashi, and Suzanne Smith is phenomenal for its ensemble as it features notable small performances from Haruhiko Yamanouchi as Logan’s old friend Yashida who offers Logan mortality while Famke Janssen is terrific as Jean Grey who would haunt Logan in his dreams and play into his sense of guilt. Brian Tee is very good as Mariko’s corrupt fiancée Mori who tries to gain power through marrying Mariko while Will Yun Lee is superb as Mariko’s childhood friend Harada who tries to protect her only to get into some trouble with Dr. Green who would use him as he becomes confused in his loyalties. Hiroyuki Sanada is excellent as Mariko’s father Shingen who becomes upset in being passed over by his father as he wants control of his father’s company. Svetlana Khodchenkova is amazing as the mysterious Dr. Green who spouts poisonous toxins as she is this slimy villain who is able to bring problems to Wolverine.

Rila Fukushima is brilliant as the skilled assassin/mutant Yukio who is a total badass as she is also Logan’s conscience of sorts as well as a sister to Mariko. Tao Okamoto is fantastic as Yashida’s granddaughter Mariko who deals with the loss of her grandfather as well as what she would inherit as she also tries to understand Logan as she tries to get him to find a reason to fight again. Finally, there’s Hugh Jackman in a marvelous performance as Logan/Wolverine as Jackman brings that sense of doing what is right as well as the anguish of a man wracked by grief and guilt as it’s a performance that makes the Wolverine character so beloved as only Jackman can bring that character to life.

The Wolverine is an excellent film from James Mangold that features an incredible performance from Hugh Jackman as the titular character. Not only is it one of the smarter action-blockbusters but also an entertaining one where it gives audiences a reason to care for the character all over again. Especially as it is a major improvement over the previous film that starred the character as well as being a solid entry in the X-Men film franchise. In the end, The Wolverine is a superb film from James Mangold.

Agreed this is far better than the first Wolverine picture. I really enjoyed this. By now, Jackman has perfected the role.

WOW you love this one a lot more than I did. I actually think Wolverine is far more watchable in the X-Men setting in a group. The first Wolverine movie was crap but this one is not much improvement. I didn't care for Tao Okamoto's wooden acting and absolute lack of chemistry w/ Hugh Jackman. Sanada is a good actor, too bad he's wasted in this one. I'm not sure I want to see another stand-alone Wolverine movie to be honest.

@Wendell Ottley-I had fun watching this film. Something the other film didn't have.

@ruth-I wouldn't mind another Wolverine film just as long as it's in the hands of competent filmmakers and screenwriters. I wanted more of Sanada as well yet Rila Fukushima more than made up for that as she kicked ass.

I've been surprised at hearing a good amount of negative feedback about this movie. I thought it was a really strong look at a character that felt so much different than most of the other recent superhero films. It actually took its time and didn't rush us through every set piece. It was quite a nice surprise.

@Dan Heaton-I think the negative reactions were over what some people wanted yet I think this film did much better in fleshing out the Wolverine character and not rush things out. It was better than I expected.

I actually wished Rila Fukushima had been the love interest instead, she is pretty bad ass!

@ruth-I agree. It would've been more interesting since that character is a whole lot of fun and has a sense of humor while kicking ass.