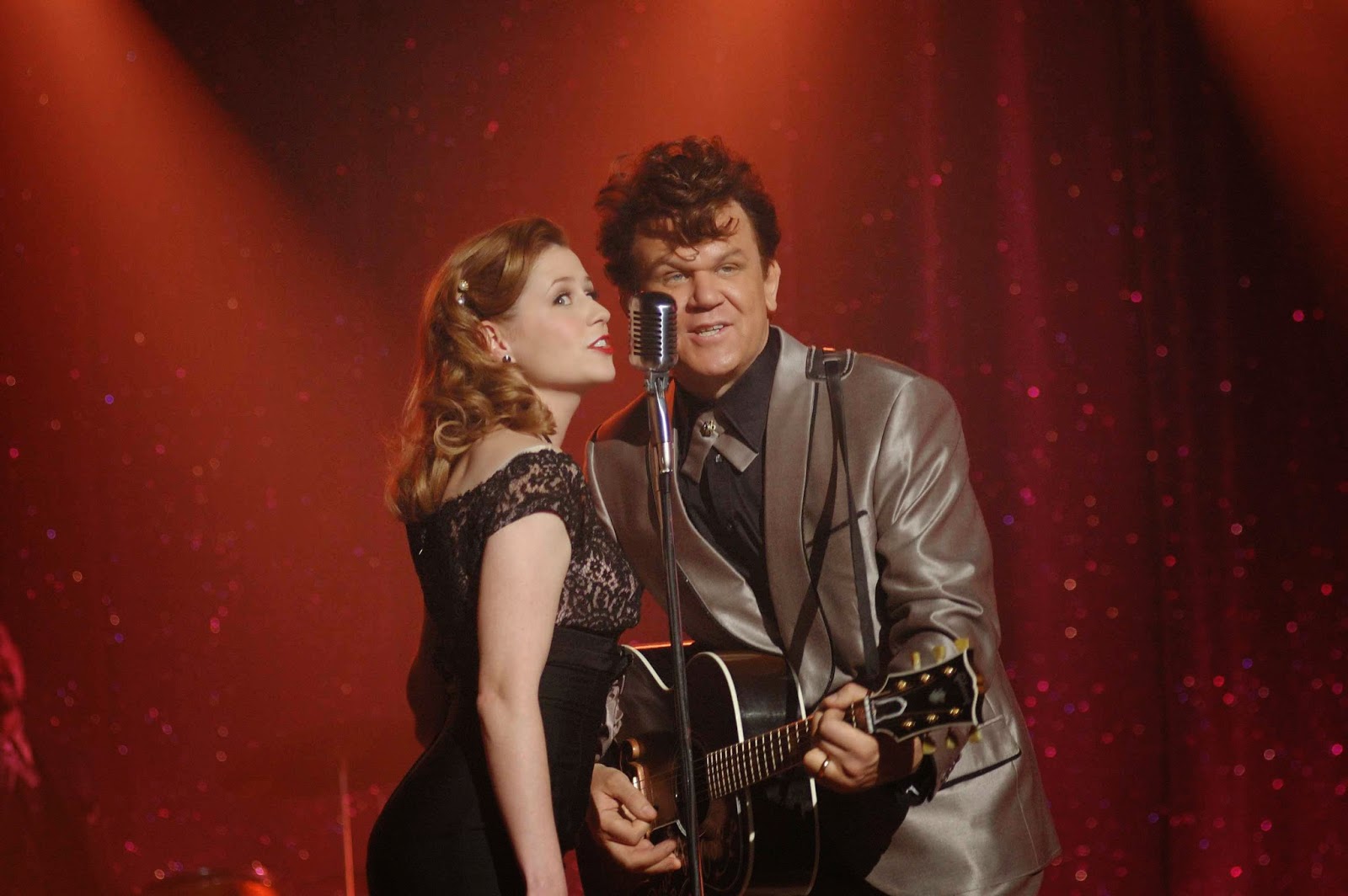 Directed by Jake Kasdan and written by Kasdan and Judd Apatow, Walk Hard: The Dewey Cox Story is the story of musician who becomes a major star in creating some groundbreaking music while enduring all of the trials and tribulations such as drug addiction, buying strange animals, sleeping with millions of women, and being haunted by the sight of machetes. The film is a spoof into the world of music bio-pics where it lampoons all of the cliches and more as its titular character is played by John C. Reilly. Also starring Jenna Fischer, Kristen Wiig, Tim Meadows, plus Apatow regulars Paul Rudd, Martin Starr, Harold Ramis, Jane Lynch, and Jonah Hill, with appearances from Jack Black, Jack White, Jason Schwartzman, Justin Long, Frankie Muniz, Eddie Vedder, and many more. Walk Hard: The Dewey Cox Story is a whimsical, entertaining, and certainly hilarious spoof on the musical bio-pics.

The film is an uncompromising spoof in the world of music bio-pics where Dewey Cox reflects on his entire life in his first performance in 25 years as he is haunted by the death of his brother Nate (Chip Hormess) in a machete accident that would lead him to lose his sense of smell and his gift for making music. Along the way, he marries his 12-year old girlfriend Edith (Kristen Wiig) and create a bunch of songs while falling for his backup singer Darlene (Jenna Fischer) who would become his second wife. In his journey to stardom, Cox would create punk rock and dabble into many musical trends such as the variety show while becoming addicted to drugs due to his drummer Sam (Tim Meadows) in a life that quite crazy but also typical of many bio-pics based on musicians where it was bound to become a parody. It's a film that takes these cliches and amp it up to 11 as Cox's journey lampoons everything from Ray Charles, Elvis Presley, Bob Dylan, Brian Wilson, Johnny Cash, and many others as it follows the scenarios of these stories and infuse it with humor. .

The script by Jake Kasdan and Judd Apatow is definitely genius as it plays with the cliches while creating moments in the film that are downright funny from the repeated breakdowns of Cox to his drug use. A lot of the film's raunchy humor that included appearances from naked people is definitely Apatow in all of his glory. Kasdan's direction is very stylish from the colorful, over-lit look of Cox's early years to the grainy footage of Dont Look Back/Eat the Document period of Cox trying to be Bob Dylan. The whole film works overall in all of its humor and drama as it plays like a bio-pic and spoof. The only real major complaint about the film is that for its 96-minute running time, it's not long enough. Largely because some of the material that appeared in the trailer including Cox's sausages, more of the disco-variety show stuff, Patrick Duffy getting punched, Cox's third wife Cheryl Cox Tiegs, and additional scenes with the Beatles were left on the cutting room for its extended DVD. Overall, Kasdan crafts a very smart and witty film about the cliched life of a musician.

Cinematographer Uta Briesewitz does some wonderfully stylish photography to convey each different period from the colorful lighting in the 50s and early 60s sequence to the grainy black-and-white look of Cox as Dylan, to the slick look of the 70s. Editors Tara Timpone and Steve Welch do great work with the film's editing for its leisurely pacing and cutting style to show Cox's moments and triumphs that is very solid. Production designer Jefferson Sage and art director Domenic Silversti do excellent work with the film's varied period looks from the wooden, farm look of Dewey's childhood home to the 70s couches and such.

Costume designer Debra McGuire does great work with the varied period costumes of Dewey's world that is lovely to watch while showing Darlene in all of her sexy look in different period clothing. Hair stylist Michelle Payne and a team of makeup artist do great work with those different periods from the teddy-boy look to the Dylan fro and 70s long hair along with the aging for the film's third act. Sound designer Robert Grieve and editor Joel Shryack do great work with the film's sound to convey the world that Dewey is in. Visual effects supervisor Evan Jacobs does great work to convey the look of Dewey's vision of his ghostly family along with a hilarious animation sequence involving Dewey and the Beatles.

Then there's the film's music and soundtrack with a wonderfully upbeat score from Michael Andrews who is also one of the film's songwriters in the many original songs created. Contributing to the writing aren't just Jake Kasdan, Judd Apatow, and John C. Reilly but indie-pop legend Marshall Crenshaw, Mike Viola, Dan Bern, and many more as the songs range from country, folk, mariachi, punk rock, hip-hop, psychedelia, and a hilarious disco cover of David Bowie's Starman. All of the songs are sung by Reilly himself with Angela Correa as the singing voice of Darlene for Let's Duet. Many of the songs including various versions of Walk Hard performed by Jackson Browne, Jewel, Lyle Lovett, and Ghostface Killah of the Wu-Tang Clan are hilarious with funny lyrics as the soundtrack is a real highlight of the film.

The film's cast assembled by Anya Colloff and Amy McIntyre Britt is pure genius as appearances from Deanna Brooks and Angela Little as lovely groupies, Jacques Slade as rapper Lil' Nutzzak who did a remake of Walk Hard, Chip Hormess as young Nate, Connor Rayburn as the young Dewey Cox, Rance Howard as a preacher, Paul Bates as a nightclub manager, John Ennis as the Big Bopper, Phil Rosenthal as Jewish talent agent Mazeltov, and Simon Helberg as Dredel L'Chai'm are funny. Cameo appearances from Jewel, Lyle Lovett, Jackson Browne, Ghostface Killah, the Temptations, and Pearl Jam's Eddie Vedder are fun to watch while Jack White of the White Stripes does a hilarious impression of Elvis Presley. Frankie Muniz is also funny as Buddy Holly but none of the cameos could ever top the casting of the Beatles whom are all funny.

Justin Long is a great George Harrison complaining about wanting to put more songs on the album while Jason Schwartzman is funny making faces and often commenting about writing a song about an octopus. Jack Black is a hoot as a huge Paul McCartney claiming he's the leader of the band while saying obscene things while Paul Rudd is pitch-perfect as John Lennon. Raymond J. Barry is funny as Pa Cox who has a great one liner, "the wrong kid died" while Margo Martindale is also great as Ma Cox. The appearances from Apatow regulars Jane Lynch as a reporter, Jonah Hill as the ghost of Nate, Craig Robinson as singer Bobby Shad Martin Starr & Harold Ramis as Jewish talent agents, and Kristen Wiig as Cox's first wife Edith are all funny in their memorable scenes with Wiig doing some funny drama with some great one-liners. Hill meanwhile, is another scene-stealer as he looks like a more attractive version of Tobey McGuire with the hair he's given.

David Krumholtz is great as Cox's manager Schwartzberg who convinces Cox to go on TV while Matt Besser and Chris Parnell are great as two of Cox's bandmates with Besser as the frustrated guitarist whose wife always sleeps with Cox and Parnell as the loving friend. Tim Meadows is a true scene-stealer for every scene he's in that involves drugs as he tells Dewey to not do them and such and then have this repeated line "you never paid for the drugs". Jenna Fischer is gorgeous as the sexy, hot, ravishing, exotic, and luscious Darlene who wows Dewey while conveying the sexual tension the two have as she becomes his shining light. Fischer's performance is very funny as she and Reilly have great chemistry both comedic and in dramatic performances. Finally, there's John C. Reilly in what is a long-overdue star-making performance as the title character of Dewey Cox. Playing the man when he's 14 to the present, Reilly gives a performance that is phenomenal as if he was born to play this fictional legend with a lot of witty humor and a singing voice that really showcases his range in ballads and such as it is really one of his great performances of his career.

Walk Hard: The Dewey Cox Story is a remarkable film from Jake Kasdan featuring a riveting performance from John C. Reilly as the titular character. In an age where spoof films have become lazy, this is a film that not only gets it right in terms of the cliches that play into bio-pics but also with a story that is thoroughly entertaining that also include some amazing songs. In the end, Walk Hard: The Dewey Cox Story is a phenomenal film from Jake Kasdan.

I love this one, especially when Meadow's character is telling Dewey he shouldn't smoke weed. I think that's my favorite scene in the entire film.

I didn't like this one as much. I understood what it wad trying to do but I just didn't find it funny. Great review, though.

@Brittani Burnham-"Get out of here Dewey! You don't want a part of this shit!!!!" I love those moments. "And you never paid for the drugs.... not once".

@Wendell Ottley-I think it's a smarter film than it actually considering that the music bio-pic was becoming a parody of itself.

This is one that I actually cannot believe I didn't see! I love Reilly (as you know, I give him the WIN for Ricky Bobby) and this film came out right after that one, and I remember really wanting to see it.

And then I didn't.

Your review has me all sorts of anxious to see it now.

@Fisti-OMG, you will love this. There's so many moments in the film that will have you laughing while Reilly should definitely have a second career as a singer because he's so damn good. It's a film that is severely overlooked as people thought it was another of those awful spoof films that had been coming out but this is way smarter than that.