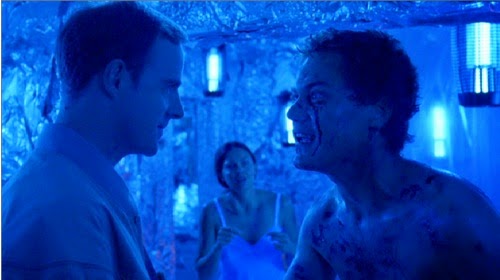 Directed by William Friedkin and written by Tracy Letts that is based on his 1996 play, Bug is the story of a woman who finds herself in a rural Oklahoma motel with a paranoid man whose obsession with conspiracy theories has him thinking that bugs and the government are out to get him. The film is a return to the horror genre that Friedkin was known for back in the 1970s as it also explores a world filled with terror in the most unlikeliest of places. Starring Ashley Judd, Michael Shannon, Lynn Collins, Brian F. O’Byrne, and Harry Connick Jr. Bug is a terrifying and chilling film from William Friedkin.

Set almost entirely in a motel room in the middle of nowhere in Oklahoma, the film revolves a bar waitress who meets a former war veteran who believes that bugs and the government are out to get him. In turn, the waitress starts to believe that everything this man says is real as forces try to interfere. It’s a film that plays into the world of paranoia as well as a woman dealing with loneliness as the well as the presence of her abusive ex-husband. The film’s screenplay by Tracy Letts maintains a sense of intimacy as it plays to the loneliness of bar waitress Agnes (Ashley Judd) who is still reeling from the disappearance of her child years ago where she parties with her friend R. C. (Lynn Collins) who invites this drifter named Peter (Michael Shannon).

Peter is a man that just went AWOL from an experiment that has him believing that bugs are inside of him as he is this unlikely quiet fellow who intrigues Agnes. Yet, Peter’s belief that bugs are trying to kill him has Agnes bewildered until she starts to believe as it raises questions about if anything Peter is saying is true or is he delusional. Even as Agnes doesn’t trust anyone but Peter as she starts to have bruises and such where it plays into a sense of mystery in the film.

William Friedkin’s direction is very intimate but also stylish in the way he plays into the lonely life of a waitress who keeps being stalked by her ex-husband Jerry (Harry Connick Jr.) as she numbs herself with drugs and partying. Much of Friedkin’s direction features some tight-close-ups and medium shots with very few wide shots where it’s only used in a scene where a helicopter is flying above this motel in the middle of Oklahoma. While there’s some scenes shot outside of the motel room, most of the film takes place inside this motel room where it’s intimate but also very chilling in its cramped setting as it gets more troubling as the film progresses. Especially where Friedkin just keeps the setting tighter and more unsettling where there’s an uncertainty by what is really happening as there’s some moments that are very violent as well as shocking that proves that Friedkin still has that ability to create some high-octane scares. Overall, Friedkin creates a very scary and compelling film about paranoia.

Cinematographer Michael Grady does excellent work with the cinematography from the grimy look of its daytime exterior/interior settings to its exterior look at night as well as the use of blue for a very chilling third act inside the motel room. Editor Darrin Navarro does brilliant work with the editing as it has this sense of style in its approach to jump-cut and rhythms while knowing when not to cut in certain scenes involving dialogue. Production designer Franco-Giacomo Carbone and set decorator Frank Zito do fantastic work with look of Agnes‘ motel room in its grimy look as well as what it would look like with tin foil in the film‘s third act. Costume designer Peggy A. Schnitzer does nice work with the costumes as it‘s mostly casual to play into the film‘s American Midwest tone.

Sound designer Steve Boeddeker and sound editor Ronald Eng do superb work with the sound from the way the helicopter sounds from inside the hotel to the sparse sound textures that play into Agnes and Peter‘s paranoia.. The film’s music by Brian Tyler is wonderful as it‘s very low-key in its electronic setting while there‘s some additional music by Serj Tankian who provides some fast-paced metal music that. Music supervisor Jay Faires brings in a soundtrack that features a diverse array of music from country, rock, blues, and metal to play into the world of the Midwest.

The casting by Bonnie Timmerman is great as it features a notable appearance from Brian F. O’Byrne who appears in the film’s third act as someone looking for Peter. Harry Connick Jr. is fantastic as Agnes’ ex-husband Jerry who wants to get back with her but is often stalking her as he wants her money. Lynn Collins is superb as R.C. as Agnes’ lesbian friend who introduces her to Peter as she would eventually question Peter’s state of mind. Ashley Judd is amazing as Agnes as a lonely waitress who is reeling from loss as her friendship with Peter has her questioning about her surroundings and everything in the world where Judd goes all out in being insane. Finally, there’s Michael Shannon in an incredible performance as Peter as a former war veteran who went AWOL as he believes that bugs and the government are out to get him where there’s a crazed element to his performance as it’s one full of terror but also complex as there’s an ambiguity into whether he’s crazy or it is really happening to him.

Bug is a remarkably riveting and horrifying film from William Friedkin. Armed with great performances from Michael Shannon and Ashley Judd as well as Tracy Letts’ haunting script. The film is definitely a return-to-form of sorts for Friedkin after a period of hit-and-miss film as it showcases his mastery in suspense and horror. In the end, Bug is a phenomenal film from William Friedkin.

I love this movie. So glad you praised Harry Connick Jr.'s work in it. His hard on, macho persona never got the credit it deserved. In fact, I really need to give this movie another watch.

I have this in my Netflix queue. I'm definitely due for a re-watch. I haven't seen it since it's been in theaters.

@Alex Withrow-Connick was great in that film and totally threatening as I'm amazed that Michael Shannon didn't throw a punch at him.

@Brittani Burnham-Re-watch it now. It's a good time to see it for the Halloween season.

This one was very disturbing , especially in the later parts of the movie. It's a horror film that relies a lot on your imagination and I found my self believing in the paranoia. Had no Idea that the lead singer form System of A down worked on the soundtrack. I may have to revisit this one.

@TheVern-I think it is worth revisiting as there is a newfound appreciation for Friedkin's work following the release of Killer Joe which I think is Friedkin's ultimate comeback film yet Bug was the starting point for him to return with a bang.