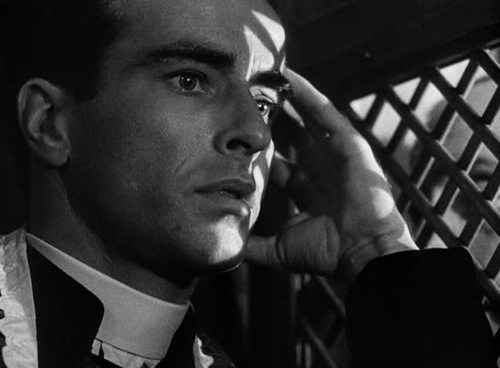 Based on the play Nos deux consciences (Our Two Consciences) by Paul Anthelme, I Confess is the story of a priest who becomes a murder suspect as he tries to find help with the church as he deals with possibly violating its rules. Directed by Alfred Hitchcock and screenplay by George Tabori and William Archibald, the film explores a man of faith dealing with a murder he didn’t commit as he finds himself in danger. Starring Montgomery Clift, Anne Baxter, Brian Aherne, O.E. Hasse, and Karl Malden. I Confess is a riveting and engaging film from Alfred Hitchcock.

Following the death of a lawyer where a German gardener confesses the murder to a young priest, the priest finds himself being a murder suspects as he ponders into telling the truth or not break his vows and protect his friend. It’s a film that is largely about internal conflict for this young priest in Father Logan (Montgomery Clift) as he has his vows that he needs to keep but the idea of going to prison for a crime he didn’t commit would overwhelm him as well as telling the truth so he can clear his name.

The film’s screenplay starts off with the investigation of the murder but also questions into what Father Logan was doing on the night of the murder. Especially as it relates to the wife of Quebec legislature member who had a past with Father Logan as she knows he is innocent while admitting to having issues with the lawyer who is killed. It would play into many suspicions that occur as the investigator Larrue (Karl Malden) feels that something isn’t right as he wants Father Logan to reveal the truth where Logan’s own conflicts come into play in its third act. Even as there are those that want to go after Logan to set an example as the people who know the truth are forced to watch in horror in the film’s climatic trial.

Alfred Hitchcock’s direction does have some aspects of style from its opening sequence as well as his approach to mood in some of the film’s dramatic and suspenseful moments. Even as he maintains a sense of intimacy in his compositions from close-ups and medium shots as well as a few wide shots for some of the film’s exterior settings set partially in Quebec City with some interior locations shot in Hollywood. Some of these involve some unique camera angles such as the flashback where Ruth Grandfort (Anne Baxter) talks about her past with Father Logan before World War II that takes much of the film’s second act. Hitchcock’s approach to suspense definitely plays into Father Logan’s internal conflict such as a sequence where he is walking around the city as he is being followed as he has no idea where to go. It’s among one of the finest moments in the film as it would lead to the climatic trial where it would play into revelations about what really happened. Overall, Hitchcock creates a very gripping yet engrossing film about a priest who knows the truth but is unable to reveal it due to his vows.

Cinematographer Robert Burks does excellent work with the film‘s black-and-white photography where it‘s quite straightforward in its daytime scenes while some of its shading and lighting schemes help set the film‘s dark mood for the scenes set at night. Editor Rudi Fehr does brilliant work with the editing with its use of dissolves as well as creating some rhythmic cuts to play into the drama and suspense. Art directors Ted Haworth and John Beckman, with set decorator George James Hopkins, do superb work with the set pieces from some of the interiors in the places near the church to the home that Ruth lives in. The sound work of Oliver S. Garretson is terrific for its sound editing as well as creating a tense mood in the trial scene. The film’s music by Dimitri Tiomkin is fantastic for its somber yet flourishing orchestral score that plays into the drama along with more eerie pieces for its suspenseful moments.

The film’s amazing cast features some notable small roles Charles Andres as the church head Father Millars, Dolly Haas as the church housekeeper Alma, Roger Dann as Ruth’s very rich and powerful husband Pierre, and Brian Aherne in a terrific performance as the Crown Prosecutor Robertson who believes that Father Logan is guilty. O.E. Hasse is wonderful as the German immigrant Otto who is the church’s caretaker/gardener that did the murder as he deals with the sacrifice Father Logan is doing.

Karl Malden is fantastic as Inspector Larrue who leads the investigation as he realize the case isn’t as simple as it is as he believes that Father Logan knows something and is actually innocent. Anne Baxter is excellent as Ruth Grandfort as a former lover of Father Logan who tries to help him as she is forced to reveal her past life with Father Logan. Finally, there’s Montgomery Clift in a superb performance as Father Logan as this young priest who is accused of murder as Clift brings a lot of restrained anguish into his role as it’s one of Clift’s finest performances.

I've only seen Montgomery Clift in The Heiress but I really want to see more of his work. I had no idea he's worked w/ Hitchcock before, and this one sounds like it's definitely worth a look!

While I consider it a minor-Hitchcock film in comparison to the great films he did in his Hollywood period. It is still an intriguing one as Clift is a highlight though I heard Hitchcock wasn't fond of working w/ him or his method acting style.