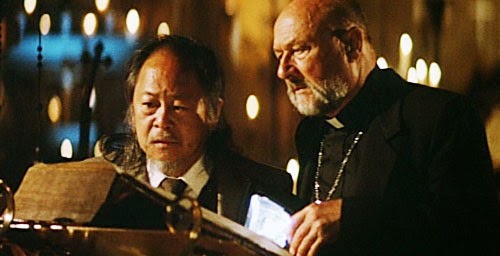 Written and directed by John Carpenter, Prince of Darkness is the story of a priest who hires a professor and his students to investigate a canister where he believes that inside this large canister is the spawn of Satan. The film is an exploration into the concept of the underworld and whether a group of people can prove that Satan exists. Starring Donald Pleasence, Jameson Parker, Victor Wong, Dennis Dun, and Lisa Blount. Prince of Darkness is a riveting and chilling film from John Carpenter.

The film explores the idea of Satan if he exists as strange things happen where a priest asks a professor and his students to study this mysterious canister which he believes has the spawn of Satan inside. Along the way, the professor and his students not only uncover some of the mysteries inside the canister but also the strange behavior of inhabitants outside of this church who seemed to be entranced by the powers of this canister. Eventually, characters get either killed off or become part of this emerging cult due to their encounter with this canister forcing those to survive and fight off this mysterious thing that is happening.

John Carpenter’s screenplay, under the Martin Quartermass alias, doesn’t really go for any kind of traditional narrative structure but rather build up the sense of mystery as things start to unravel while most of the students and people inside the church are either dead or under the control of this mysterious substance. Even as fear begins to emerge in the priest (Donald Pleasence) who starts to gain doubt about his role while the professor Howard Birack (Victor Wong) tries to make sense of everything. Yet, the priest and Birack do agree that whatever is in that canister is evil where the two and the remaining survivors try to deal with this awful situation. Even as a few of these students in Brian Marsh (Jameson Parker), Walter (Dennis Dun), and Catherine Danforth (Lisa Blount) each try to figure things out as well as observe what is going on around them.

Carpenter’s direction is pretty straightforward in terms of compositions and the atmosphere he creates as it largely takes place in an old church in Los Angeles. Much of Carpenter’s direction is about mood as the opening credits sequence plays into establishing the key characters and what they’re about to get into as the priest deals with the secret he now has to carry. Yet, Carpenter would include a few things of what to expect as they do come in head-on by the time the story takes place in and outside of the church where a lot of strange things happen.

Among them involve ants, beetles, and worms as they would add the sense of terror that would emerge. Even as little things become a big deal where characters who would encounter the mysterious canister start to act strangely as it involves characters being killed in the most gruesome ways. Even in a few scenes as it plays to a chilling climax involving the arrival of Satan’s spawn where the survivors have to take action or else be killed. Overall, Carpenter creates a very eerie yet engrossing film about a group of people trying to see if evil does exist.

Cinematographer Gary B. Kibbe does excellent work with the film‘s cinematography from the way he creates some lighting schemes and mood for much of the film‘s interior setting on day and night as well as the grainy video footage that many of the characters would dream about. Editor Steve Mirkovich does amazing work with the editing to create some unique rhythmic cuts to play into the film‘s suspense and terror. Production designer Daniel A. Lomino and set decorator Rick Gentz do brilliant work with the look of the church with a lot of crosses inside of the place as well as the design of the canister.

Special effects makeup artist Mark Shostrom does fantastic work with some of the makeup effects including the look of the seed of Satan. Visual effects supervisor Robert Grasmere does superb work with the visual effects that includes some minimal moments that plays into the world of the supernatural. Sound editors Michael Hilkene and Val Kulkowsky do terrific work with the sound effects as well as some of the mixing and sound texture to play into its suspense. The film’s music by John Carpenter and Alan Howarth is wonderful for its eerie, electronic-based score that plays into the film’s suspense as the soundtrack also includes a song from Alice Cooper heard from a character’s walkman.

The casting by Linda Francis is phenomenal as it features some notable small roles from Alice Cooper as a street schizophrenic, Peter Jason as Birack’s colleague Dr. Leahy, Susan Blanchard as Catherine’s friend Kelly, Anne Howard as the radiologist Susan who would start the chain of events that occur in the film, Ann Yen as the Latin translator Lisa, Dirk Blocker and Ken Wright as a couple of students, Jesse Lawrence Ferguson as the student Calder who becomes troubled by his encounters with those who had previously encountered the canister, and Robert Gasmere as a student who tries to leave only to find himself in serious trouble. Dennis Dun is amazing as Walter as he is the film’s comic relief who is upset that he is forced to cancel a date to take part in this project as he says some of the film’s funniest lines.

Lisa Blount is fantastic as Catherine Danforth as a student who deals with the chaos that goes on as she is also a math theorist who becomes befuddled by the theories she’s presented. Jameson Parker is superb as Brian Marsh as a student who has a crush on Danforth while trying to make sense of what is happening as he is also a theorist in his own way. Donald Pleasance is excellent as the priest who invites Professor Birack to investigate the phenomenon with great reluctance and regret as he becomes to feel doubt over what might happen. Finally, there’s Victor Wong in a marvelous performance as Professor Howard Birack as this unconventional professor who tries to make sense of the phenomenon while dealing with the fact that it could be pure evil.

John Carpenter Films: Dark Star - Assault on Precinct 13 - Halloween - Someone’s Watching Me! - Elvis - The Fog - Escape from New York - The Thing - Christine - Starman - Big Trouble in Little China - They Live - Memoirs of an Invisible Man - Body Bags - In the Mouth of Madness - Village of the Damned - Escape from L.A. - Vampires - Ghosts of Mars - The Ward

All kidding aside, I love this film, from the mood and atmosphere that Carpenter establishes from the get-go to the heartbreaking performance by Lisa Blount. Her final image is so haunting and stayed with me for days afterwards.

That mustache is awesome. Props to the mustache.

It was a better film than I thought it would be as I have a couple of more films by John Carpenter I'm going to watch as there's no question in how good he was in the 1970s and the 1980s.

I didn't love the movie, but I love the score from the opening titles (http://www.youtube.com/watch?v=CTVFlMy5kdw)

@Chris-Carpenter I don't think gets a lot of credit for his work as a composer as his scores are just awesome as I think this film is one of his more underrated films of his glory years which is the 1970s and 1980s.