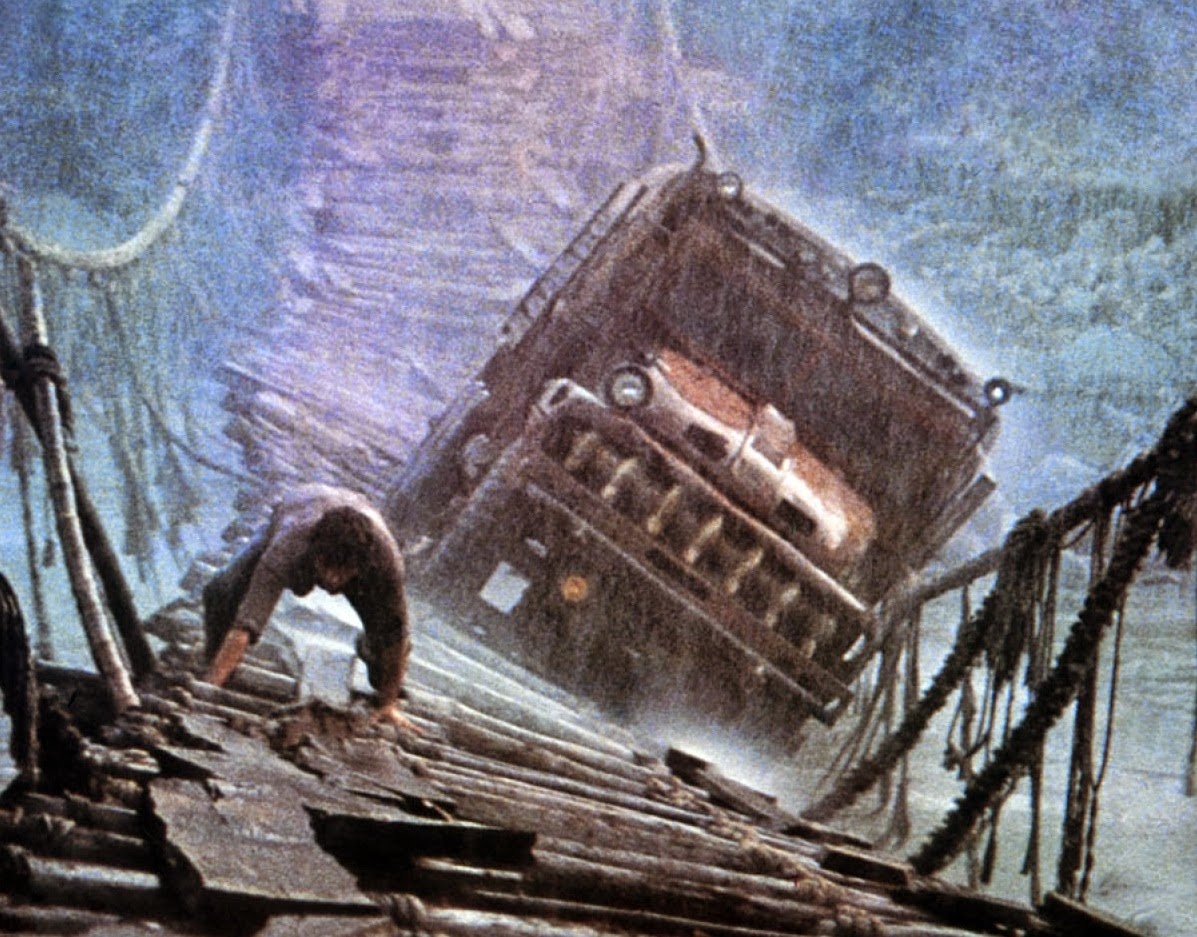 Based on the novel Le Salaire de la pleur (The Wages of Fear) by Georges Arnaud, Sorcerer is the story of four different men in a South American village who take a job to carry a transport cart full of nitroglycerine through the jungles. Directed by William Friedkin and screenplay by Walon Green, the film is a remake of the 1953 film The Wages of Fear by Henri-Georges Clouzot, the film is an exploration into the world of fear and what drives men into taking a dangerous job where they risk their lives for money. Starring Roy Scheider, Bruno Cremer, Francisco Rabal, Ramon Bieri, and Amidou. Sorcerer is a mesmerizing and very dark film from William Friedkin.

The film is about four different men from four different countries who take a job to carry two trucks full of nitroglycerine through the South American jungle in order to defuse an oil well explosion just 200 km from a small town. It’s a film where these four men from very different worlds are forced to work together as they’re putting their lives on the line as well as be well-paid once the job is done. Yet, carrying a truck full of nitroglycerine through 200 km of treacherous South American jungle as well as bad weather and narrow roads through its mountains. Walon Green’s screenplay definitely has an unusual structure where it’s first act takes place in four different locations to establish who these four men are and why they would go to this very poor town in South America. The second act is about these four men where three of them take on different identities as they work through odd jobs against the comfort of the previous lives where they find out about this job where money is the motivation.

For the American Jack Scanlon (Roy Scheider) who is a fugitive for the mob, it’s a chance to remain in hiding while French banker Victor Manzon (Bruno Cremer) is also a fugitive for different reasons as he was forced to leave his wife and quaint life to avoid going to jail. The other two is an Arab terrorist named Kaseem (Amidou) who has fled Jerusalem following a bombing that he took part in while the wild card is an assassin named Nilo (Francisco Rabal) who was supposed to stay in this small town temporarily but ends up staying because he wants the money. Much of the film’s second half is about the journey through the jungle as the stakes become more treacherous where it’s not just about these four men using their skills but also having to work together despite their differences.

William Friedkin’s direction is truly intense from the way he opens the film to introduce the four principle characters all in the span of 24 minutes. All of it takes place in four different locations as well as in shooting styles where Nilo’s line of work in Vera Cruz displays his personality as everything he does is simple and to the point. The activities of Jack and Kaseem are very violent where the former was just a driver for a mob heist that went wrong while Kaseem is forced to watch his friends be killed and captured. For Victor, he is forced to flee France because of a bribery and fraud scandal that he had been accused of as all of his chances for alibis fall by wayside. Much of the direction for these scenes are simple and quaint where there’s a sense of comfort. All of that goes away once the film moves to this very desolate village in South America where much of it is shot in the Dominican Republic as well as some locations in Mexico and New Mexico.

There are moments in the film where Friedkin goes for these entrancing wide shots of these jungles where it’s a world that has a sense of beauty but it’s also unforgiving. There’s also some tense moments in the film where Friedkin makes the journey to be on where men have to trust each other as it includes this very gripping sequence in the rain where the trucks each carrying three boxes of nitroglycerine has to cross this already fragile suspension bridge through heavy rain. It’s a moment in the film where it’s about the sense of unknown and whether anyone will survive or will the bridge break and the truck will fall into the river and blow up. It’s among these moments that Friedkin creates that plays into the suspense as he also adds moments of surrealism in a very famous sequence involving this very strange landscape. Overall, Friedkin creates a very intense yet harrowing film about four men who play with their lives for money.

Cinematographers John M. Stephens and Dick Bush do amazing work with the film‘s cinematography from the use of lighting schemes for the scenes set in the jungles along with some unique lights for some of the stranger moments as well as some darker moments for the scenes set in the rain. Editors Bud Smith and Robert K. Lambert do brilliant work in the editing to create some very unconventional rhythmic cuts to play into the suspense as well as some stylish dissolves for the surrealistic moments. Production designer John Box, with set decorator Robert W. Laing and art director Roy Walker, does fantastic work with the set design from the different places the men live in their previous lives to the suspension bridge as well as the small South American town they live in.

Costume designer Anthony Powell does nice work with the ragged look of the men with the exception of Nilo who often wears some designer suit. Sound editor Charles L. Campbell, with additional sound design from Aaron Levy for the remastered version of the film, does excellent work with the sound to play into the sense of terror such as the suspension bridge scene as well as the scenes set in the jungle. The film’s music by Tangerine Dream is just incredible as its electronic-driven score plays into the sense of tension and suspense that occurs in the film as it features additional pieces by Keith Javert, Charlie Parker, and Miles Davis.

The casting by Louis DiGiamo is superb as it features some notable small roles from Anne-Marie Deschott as Victor’s wife, Friedrich von Ledebur as a bartender at a bar the men often frequent at, Joe Spinell as a friend of Scanlon in South America, Rosario Almontes as a barmaid who would give Victor a cross as a sign of good luck, Karl John as a German friend of Kaseem who was supposed to be the fourth man, and Ramon Bieri as the oil company representative who would pick the men for the job as well as the one who would pay them. Amidou is excellent as an Arabic terrorist who flees Jerusalem to hide from the Israelis as he is efficient in engineering in creating some things as well as having an intense dislike for Nilo. Francisco Rabal is amazing as the assassin Nilo who is a man that can do anything to get what he wants as he has this mix of being a cunning killer who tends to rub everyone the wrong way.

Bruno Cremer is fantastic as Victor as this French banker who becomes disgraced due to accusations of fraud as he is forced to leave his posh life to work in order to survive as he takes the job in hopes to find redemption as he would befriend Kaseem and Scanlon. Finally, there’s Roy Scheider in a marvelous performance as Jackie Scanlon as this former criminal who is hiding from the mob as he is this everyman that just wants the money and the chance to not be in danger from the mob as it’s a very gritty and engaging performance from Scheider.

Sorcerer is a phenomenal film from William Friedkin that features a great leading performance from Roy Scheider as well as strong supporting work from Bruno Cremer, Francisco Rabal, and Amidou. The film is definitely one of the rare remakes that manages to be as good or as equal as to the original as it isn’t just a worthy homage to The Wages of Fear but also manages to be something of its own. In the end, Sorcerer is a tremendously sprawling and exhilarating film from William Friedkin.

Related: The Wages of Fear

I didn't know Tangerine Dream did the soundtrack. What a great header image from the poster! So dramatic.
Interested in checking this out, I loved "The Wages of Fear". I've heard there are various cuts of "Sorcerer", not sure which one to go for. Friedkin disowned the 2014 dvd according to wiki

The version that I saw is the one on Blu-Ray as it's the one that Friedkin approved of as there's additional text after the final credits of the film in relation to its remastering. It's the one to see as it's really one of those rare remakes that lives up to its original.