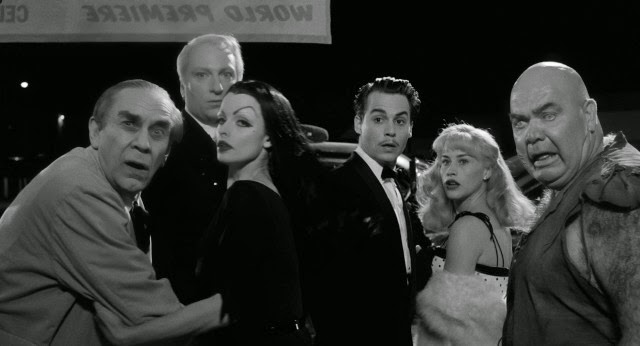 Based on the biography Nightmare of Ecstasy by Rudolph Grey, Ed Wood is the story about one of cinema’s worst filmmakers as he struggles to find success through his offbeat yet cheaply-made films while forging a friendship with his idol in film actor Bela Lugosi. Directed by Tim Burton and screenplay by Scott Alexander and Larry Karaszewski, the film explores a period in Wood’s life where he tries to succeed through film that would culminate with the release of his most infamous film in Plan 9 from Outer Space as the titular role is played by Johnny Depp while Martin Landau plays the role of Bela Lugosi. Also starring Sarah Jessica Parker, Patricia Arquette, George “The Animal” Steele, Lisa Marie, Jeffrey Jones, and Bill Murray. Ed Wood is a witty and enchanting film from Tim Burton.

The film explores the life of a young artist named Edward D. Wood Jr. as he is eager to become a filmmaker like his favorite director Orson Welles where he later meets his idol in Bela Lugosi who would take part in Wood’s films. The film explores Wood’s life from the early 1950s where he is trying to get his film career off the ground and climax with him making Plan 9 from Outer Space which he became very famous for but for all the wrong reasons. Along the way, Wood struggles through personal relationships that fall apart as well as trying to get funding for his films like Glen or Glenda and Bride of the Monster where they would be reviled by critics and audiences. Yet, Wood has this optimism that is so compelling in his belief that he will become a great filmmaker while helping out the man he worshipped in Lugosi who is struggling with his own addiction to morphine.

The film’s screenplay is quite straightforward in its narrative but also filled with lots of humor in the way Wood often tries to succeed with his pals and his girlfriend Dolores Fuller (Sarah Jessica Parker) early in his career. Wood’s meeting and friendship with Lugosi is the heart of the story where Wood hopes to revive Lugosi’s career by putting him in his films despite everyone’s claims that he is washed up. However, Lugosi feels revitalized despite his issues where Wood would receive the support from a young woman in Kathy O’Hara (Patricia Arquette). Other aspects of the film includes Wood’s love of transvestite as he likes to wear women’s clothing which made him want to take part in a film version about the Christine Jorgensen story which he convinces a producer to create his own version of the story that would become Glen or Glenda. The script also explores the group of friends that Wood has where they’re a group of eccentric people as it’s this band of misfits trying to make a name for themselves.

Tim Burton’s direction is definitely a homage of sorts to the works of Ed Wood as well as being this film that plays into Wood’s attempt to find success as a filmmaker. Burton showcases a lot of what goes in the world of film where Wood had to use limited resources and such in order to make his films where his limitations and lack of funds often contribute to the poor quality of his films. Most of which is played for laughs but Burton is very sympathetic to Wood’s determination as he believes he is trying to make something good. Much of the direction has Burton go for simple compositions while giving the film a very old-school feel that recalls the period of the 1950s as it’s shot on location in Los Angeles. Burton’s approach to recreating some of Wood’s films do play into its low-budget aesthetics as well as wooden and terrible acting which adds the sense of joy into the film. Even in the scenes involving Wood and Lugosi where it’s humorous but also full of heart as it showcases how important their friendship is. Overall, Burton creates a very heartwarming and very funny film about the film career of Ed Wood and his friendship with Bela Lugosi.

Cinematographer Stefan Czapsky does brilliant work with the film‘s black-and-white photography to give the film a very old-school look to play into the period of the 1950s with some unique lighting schemes for some of its interiors and shots in its nighttime scenes. Editor Chris Lebenzon does excellent work in creating a straightforward style for most of the film including some stylish dissolves to play into Wood‘s own enthusiasm as a filmmaker. Production designer Tom Duffield, with set decorator Cricket Rowland and art director Okowita, does fantastic work with the set pieces from the set design of some of Wood‘s films which were quite terrible to the scary mansion ride where Wood and Kathy would have their first date at. Costume designer Colleen Atwood does amazing work with the clothes from some of the women‘s clothes and angora sweater that Wood would wear as well as the clothes of the other characters to play into their eccentricities.

Makeup designers Rick Baker, Ve Neill, and Yolanda Toussieng do superb work with the makeup from the look of some of the characters as well as Bela Lugosi as this old man often forced to live in the past. Visual effects supervisor Paul Boyington does nice work with some of the visual effects to play into the cheesy low-budget aesthetics of Wood‘s films. Sound editor John Nutt does terrific work with the film‘s sound from some of recreation of sound effects to the sounds that goes on in some of the film‘s locations. The film’s music by Howard Shore is wonderful for its orchestral score that features some lush string arrangements in its dramatic moments plus some light-hearted pieces in its comical scenes.

The casting by Victoria Thomas is great as it features some notable small roles from G.D. Spradlin as a preacher who would fund Plan 9, Ned Bellamy as Kathy’s chiropractor who would fill in for Lugosi in Plan 9, Max Casella and Brent Hinkley as two of Wood’s friends in their respective roles as notoriously bad actors Paul Marco and Conrad Brooks, the real Conrad Brooks as a bartender, Mike Starr as the exploitation film producer George Weiss who is reluctant to work with Wood, Juliet Landau as the actress Loretta King whom Wood mistakes an heiress as she would be a cause into Wood’s split with Dolores, and Vincent D’Onofrio as Orson Welles whom Wood would meet late in the film. Other noteworthy small roles include Lisa Marie who is wonderful as the TV host Vampira whom Lugosi likes as she would later work with Wood, George “The Animal” Steele in a terrific performance as the wrestler Tor Johnson, and Jeffrey Jones in a superb performance as the TV psychic entertainer Criswell who helps Wood get funding despite being wrong very often with his predictions.

Sarah Jessica Parker is excellent as Wood’s girlfriend Dolores Fuller who is often supportive but becomes frustrated by his lack of success as well as being a transvestite. Patricia Arquette is fantastic as Wood’s future wife Kathy O’Hara who not only accepts Wood for who he is but proves to be one of his biggest supporters. Bill Murray is hilarious as Wood’s openly-gay friend Bunny Breckenridge who often finds transvestites for Wood’s films as well as appear in them. Martin Landau is incredible as Bela Lugosi as he brings in a lot of energy into the role as well as being very foul-mouthed over Boris Karloff while trying to regain some attention as it’s Landau at his best. Finally, there’s Johnny Depp in a remarkable performance as the titular character as this very upbeat man who is eager to succeed while being a weirdo who likes to wear ladies’ clothing as it’s Depp in one of his quintessential performances.

Ed Wood is a phenomenal film from Tim Burton that features a great performance from Johnny Depp as the titular character as well as Martin Landau in an amazing performance as Bela Lugosi. The film isn’t just one of Burton’s best films but also a captivating story of a filmmaker trying to make it despite his lack of talent as it is a love letter to Wood but also a heartfelt story about Wood’s friendship with Lugosi. In the end, Ed Wood is a sensational film from Tim Burton.

I love this movie. It might be Depp and Burton's best collaboration. Great review.

I absolutely agree with you. It's just a shame that Burton hasn't really made any good films lately while Depp is just coasting on being weird.

Great review! Honestly, Burton's best film (although I sort of love Edward Scissorhands possibly more...possibly) and one of Depps greatest performances as well.

@Fisti-Thanks. Beetlejuice is my favorite Tim Burton film while this film features one of my 5 favorite performances from pre-Jack Sparrow Depp.

Burton's masterpiece and I think its commercial failure hit him pretty hard and his subsequent output seems to suggest - he retreated to cranking out films that trademarked his "style," but most of them lack the heart that ED WOOD has. That film is not simply a homage to passion of filmmaking but also film-watching and cinema in general.

I have hopes for Burton's upcoming BIG EYES, which is written by the two guys that wrote ED WOOD. Let's hope it's a return to form for Burton.

@J.D. Lafrance-I also hope Big Eyes is a return-to-form and I want Burton to stop relying on visual effects and focus more on story and actual set designs.

If I had to rank my favorite Tim Burton films, Ed Wood would make the top 2 or 3. Both Depp and Landau are amazing in this. I really hope Big Eyes is similar in tone to Ed Wood.

@Chris-It's my third favorite film from Burton behind Pee-Wee's Big Adventure in 2nd and Beetlejuice in first. It's also my favorite performance from Johnny Depp. What happened to that guy? He used to be so interesting.