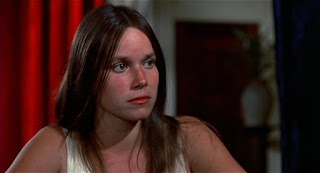 Based on the book Sister of the Road by Ben L. Reitman, Boxcar Bertha is the story of two train robbers/lovers who become fugitives when the titular character is charged with the murder of a gambler while they deal with the plight of railroad workers in the American South. Directed by Martin Scorsese and screenplay by Joyce H. Corrington and John William Corrington, the film is a low-budget crime drama produced by Roger Corman that play into the exploit of two lovers who rob trains while wanting to maintain a life without complications. Starring Barbara Hershey, David Carradine, Barry Primus, Bernie Casey, John Carradine, Harry Northup, and Victor Argo. Boxcar Bertha is an exciting and compelling film from Martin Scorsese.

The film is about a young woman who meets a union organizer as they fall in love and later rob banks with a couple of friends following the murder of a gambler. It’s a film that is a dramatic take of the real life criminal who gets involved with crime accidentally as she has a resentment of those who control the railroad and the rich who didn’t suffer as it all takes place during the Great Depression. The film’s screenplay by Joyce H. Corrington and John William Corrington is largely straightforward in its narrative and how the titular character (Barbara Hershey) was brought into crime after her brief encounter with the union organizer Big Bill Shelly (David Carradine) who helps her settle matters relating to her father while later meeting up with a gambler in Rake Brown (Barry Primus) as she accidentally kills another gambler in defending Brown. Bertha, Brown, Shelly, and a friend in Von Morton (Bernie Casey) would start a gang to rob trains and banks though they would get the unwanted attention of H. Buckram Santoris (John Carradine) who wants to stop the gang.

Martin Scorsese’s direction is largely simple in its approach to the direction while he would make some unique compositions throughout the film. Shot on location in Arkansas, the film does play into a period of time during the Great Depression in the American South where everyone is struggling as Scorsese uses a lot of wide shots to get a look at the surroundings that the characters venture into. Scorsese’s direction emphasizes more on close-ups and medium shots to get to know the characters and their situation while using some stylized moments in the compositions. Notably in some of the film’s violent moments where it has bits of style in the way characters are killed but there’s also a sense of drama into the situations that happen. Even in the third act where Santoris’ power starts to come into play where things get serious but there is also moments where Bertha endures not just loss but also uncertainty as she tries to figure out a life after crime and chaos. Overall, Scorsese creates an exhilarating and captivating film about a young woman who takes part in a series of robberies as a way to stick up for the railroad workers.

Cinematographer John Stephens does excellent work with the film’s cinematography as it is largely straightforward in terms of the visuals with its usage of natural lighting for many of the daytime exteriors with some low-key lighting for the interior/exterior scenes set at night. Editor Buzz Feitshans does nice work with the editing as it does have some stylish moments in a few jump cuts for some of the action while maintaining some rhythmic cuts for some of the drama. Sound mixer Donald F. Johnson does terrific work with the sound as it’s straightforward in capturing some of the atmosphere of the locations as well as the sounds of gunfire. The film’s music by Gib Guilbeau and Thad Maxwell is fantastic for its mixture of folk, blues, and country music to play into the period of the times as it has elements of traditional music and contemporary pieces.

The film’s superb cast include some notable small roles from Harry Northup as a gambler that Bertha and Brown encounter whom the former would kill, Victor Argo and David Osterhout as a couple of law enforcers trying to go after Bertha and her gang, and John Carradine in a wonderful performance as the lawman H. Buckram Santoris as a man who is trying to protect the financial interests of the railroad and uphold the law where he would have his own encounters with Bertha and her gang. Barry Primus is fantastic as the gambler Rake Brown as a gambler from the north who befriends Bertha as he is reluctant to take part in robberies only to see the financial benefits of the trade. Bernie Casey is excellent as Von Morton as a friend of Bertha who is loyal and cunning where he helps out Shelly in getting out of jail and take part in the robberies.

David Carradine is brilliant as Big Bill Shelly as a union organizer struggling to help the railroad workers as he endures abuse from the law prompting him to venture into crime while falling for Bertha whom he wants a good life with. Finally, there’s Barbara Hershey in an incredible performance as the titular role as a young woman who is trying to find her way following her father’s death where she finds herself becoming a criminal to support herself as well as go after those that was doing some injustice towards those trying to make a decent living.

Boxcar Bertha is a marvelous film from Martin Scorsese. Featuring a great cast, a compelling story, nice visuals, and a superb music soundtrack, it’s a film that has Scorsese exploring the world of crime but in a different setting while using the limited resources he has to stray from some of the conventions of the B-films that producer Roger Corman is known for. In the end, Boxcar Bertha is a remarkable film from Martin Scorsese.

Barbara Hershey was so good in Black Swan but I've seen none of her early work. This sounds interesting.

@Brittani-She is great in this as she is a big reason to see this film even though it's widely considered to be minor Scorsese as it was his second narrative-based film but it's still worth a watch.