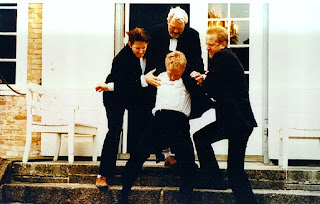 Written by Thomas Vinterberg and Mogens Rukov, Festen (The Celebration)/Dogme #1 is the story of a family coming together to celebrate a patriarch’s 60th birthday until someone unveils a secret that would ruin everything. The first film under the Dogme 95 movement founded by Vinterberg and Lars von Trier, the film is an exploration into a family’s life in the middle of Denmark as it all comes apart by dark secrets. The result is a gripping yet mesmerizing film under the Dogme 95 movement.

A family gathering at a posh hotel in Denmark sets the stage for an event where a birthday celebration becomes a disaster as secrets are unveiled. Notably as the eldest son of the family claims that his father had sexually abused him and his late twin sister many years ago when they were children as everything starts to come apart. It’s a film that plays into a family coming undone as dark truths are unveiled along with many accusations in the course of an entire day in this posh hotel where a patriarch’s 60th birthday celebration becomes a day in hell for him.

The film’s screenplay slowly plays into an entire day where a day which was to be about something good ends up becoming something far more terrifying. Even as things become more complicated when the eldest daughter introduces her family to her new boyfriend in an African which only roused her boorish younger brother who is wild and a known-racist. Things do intensify since the eldest son makes this announcement as if a series of time bombs start to go off where all of these secrets and such become unveiled. It’s not just in the patriarch but also in some of the members of the family as it also relates to the youngest son and his own troubled marriage in which he treats his wife very poorly.

The film’s direction is quite engaging for the fact that it is shot entirely on hand-held cameras as part of the Dogme rules while there’s a few tricks where the camera capture scenes through the aid of a few things without the use of anything mechanical and such. Instead, the director (who is not credited for this film under the Dogme rules) goes for something that is simple as there’s a lot of close-ups and medium shots along with some strange camera movements that is common with a lot of films shot in hand-held cameras. Much of it plays into the drama where things do intensify as it becomes more unsettling as it goes on. Even as the director captures everything that is happening such as moments of silence where no one feels easy about everything that had been unveiled. Overall, what the director has created is a very intense yet eerie film about a family coming apart during a patriarch’s birthday.

Cinematographer Anthony Dod Mantle does amazing work with the naturalistic yet low-key photography as it‘s shot on grainy film to play into something that feels very real. Editor Valdis Oskarsdottir does brilliant work in creating some unique cuts to play into the drama and action as well as some of the film‘s dark humor. Sound designer Morten Holm does superb work with the sound to capture everything that goes on in location (as part of the Dogme rules). The film’s music by Lars Bo Jensen is wonderful as it’s very low-key as it’s played on location rather than added in post-production (as part of the Dogme rules) as well as bits of classical music that is played in the background.

The casting by Rie Hedegaard and Lene Seested is phenomenal as it features notable small appearance such as the film’s director as a cab driver, John and Erna Boas as a couple of grandparents, Lars Brygmann as the hotel receptionist, Lene Laub Oksen as the dead twin sister Linda, Bjarne Henriksen as the head chef Kim who knew about what happened, Klaus Bodman as the party’s toastmaster, Therese Glahn as a maid named Michelle who had an affair with the youngest brother Michael, Helle Dolleris as Michael’s mistreated wife Mette, and Gbatokai Dakinah as the African-American boyfriend of the eldest sister Helene. Trine Dyrholm is terrific as the maid/former flame of the eldest son Christian who tries to keep everything in tact while discovering some truths about what happened to Linda.

Birthe Neumann is excellent as that family matriarch Else who tries to keep things going as she’s either in denial or doesn’t know what really happened. Paprika Steen is fantastic as the eldest child Helene who would find her sister’s suicide note as she copes with the entire day as well as her youngest brother’s behavior towards her boyfriend. Thomas Bo Larsen is brilliant as the youngest child Michael as he is a total asshole to everyone as he tries to please his father and get in his good graces. Henning Moritzen is amazing as the patriarch Helge as a man who is trying to maintain order as he is the one that is being celebrated as he copes with the accusations that are made by his eldest son. Finally, there’s Ulrich Thomsen in a phenomenal performance as Christian as the eldest son who accuses his father of molesting him and his twin sister as he tries to reveal the truth about his own family.

Festen is a remarkable film as it features great cast and amazing ideas based on the Dogme 95 rules. It’s a film that isn’t just a compelling story about a family coming apart but also a film that plays into dark secrets that marks the end of a façade that was perpetrated by its patriarch. In the end, Festen is a tremendous film.

Henning Moritzen and Thomas Bo Larsen are astonishingly good here! This movie is remarkable, too. Such a high tensity ensemble that works on every level.

@Fisti-Totally as I think it's one of the finest films ever made and certainly a great example of the Dogme film.

@Wendell-You should as if there's one Dogme film I would recommend, it's this one.

Have you seen Far from the Madding Crowd yet Steven? Well, having seen two of Thomas Vinterberg's films so far, I'm curious to check this one out. I think The Hunt was an excellent film.

@ruth-Not yet. I'm going to see some new films after the festival as I'm just focused on the marathon at this moment. The Hunt was a film I considered putting in the marathon but there were other films that I wanted to see.