(Winner of the FRISPECI Prize at the 2006 Cannes Film Festival) 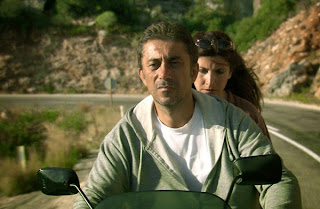 Written, directed, and starring Nuri Bilge Ceylan, Climates is the story of a relationship deteriorating in the course of a year. The film is an exploration of a couple coming apart as they cope with what worked for them and why they’re falling out of love. Also starring Ebru Ceylan and Nazan Kirilmis. Climates is an engrossing yet evocative film from Nuri Bilge Ceylan.

Set in the course of year told through three different seasons, the film explores a couple splitting up as they each try to figure out what happened to see if the split is temporary or permanently. It’s a film that is that plays into a couple coming apart not just due to difference in age but also in where these two people are at in their lives. It is told with a very unconventional script despite using a traditional three-act structure as it’s more about mood and motivations for these two people who are coming apart. Notably as it’s first act revolves around the act of a couple on a summer holiday in Kas where it turns sour as it’s second act is about the husband in Istanbul during the fall where its third act would be about the two seeing each other again in Agri during the winter. There is very little dialogue in the script as it’s more about these two trying to see what happens but also elements into why they split up and the possibilities of the two probably never getting back together.

Nuri Bilge Ceylan’s direction, like the film’s script, is very minimalist as he doesn’t really go for anything elaborate but rather something that is simple but visually-entrancing. Much of it involves a lot of long takes and not a lot of camera movements as Ceylan is more concerned with the framing and what does the image say on camera. Ceylan’s usage of close-ups and medium shots add to the low-key approach to the drama as it’s very straightforward but also knows where to place the camera for certain scenes such as the second act where Ceylan’s Isa character is meeting a woman he knows as they would have rough sex.

It is shot in a medium wide shot as Ceylan is more focused on a nut on the floor rather than the couple having sex. It is among these images that add to this minimalist approach that Ceylan wants as he shoots in various places in his native Turkey where he creates beautiful images in places like Kas and Agri with some gorgeous wide shots. Especially as it help adds to the drama over Isa’s own failing marriage to Bahar (Ebru Ceylan) as they would question about their future together. Overall, Ceylan creates a mesmerizing and compelling film about a couple’s dissolution.

Cinematographer Gokhan Tiryaki does amazing work with the film‘s very beautiful high-definition video look to capture some of the beauty of the locations in its different seasons as well as the approach to low-key lighting for some of the film‘s interior settings. Editors Nuri Bilge Ceylan and Ayhan Ergursel do excellent work with the editing as it‘s very straightforward in fleshing out a very methodical pace with the film as there aren‘t a lot of cuts to play into the long takes and gazing images. Sound editor Thomas Robert does superb work with the sound as it is very natural and sparse to play into the locations as well as capture the pieces of music that appears on location in the film.

The film’s cast includes some notable small roles from Arif Asci and Mehmet Eryilmaz as a couple of friends of Isa and Nazan Kirilmis in a wonderful performance as a mistress of Isa whom he gets reacquainted with following his split with Bahar where things become strange and awkward. Nuri Bilge Ceylan is brilliant as Isa as a professor who is trying to finish a thesis as he copes with the failure of his marriage and wonders if there’s a chance he could fix it. Finally, there’s Ebru Ceylan in a phenomenal performance as Bahar as an art director for films who ponders what is wrong as she tries to figure out if she can move on while dealing with its failure as she brings out much of the film’s emotional aspects.

I didn't even know what FRISPECI Prize was. This film sounds intriguing though.

It's an international critics prize chosen by a group of film critics and journalist. It's a big deal in the world. This is an intriguing film since Nuri Ceylan Bilge is a big deal in Cannes as he did win the Palme d'Or last year for Winter Sleep.