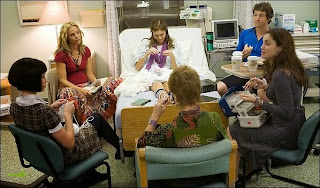 Based on the novel by Karen Joy Fowler, The Jane Austen Book Club is the story of a group of women and one man who come together to read and discuss the books of Jane Austen as the stories start to mirror elements into their own lives. Written for the screen and directed by Robin Swicord, the film is an exploration into the world of love as six different people use the works of Jane Austen to help them with their lives. Starring Kathy Baker, Maria Bello, Emily Blunt, Amy Brenneman, Maggie Grace, Hugh Dancy, Mark Blucas, Kevin Zegers, Jimmy Smits, and Lynn Redgrave. The Jane Austen Book Club is an enchanting and witty film from Robin Swicord.

The film plays into the lives of five different women and a man who come together to read and discuss the six novels by Jane Austen as the books would inspire some to find love along with other things that play into the works of Jane Austen. Among them is a Rhodesian Ridgeback dog breeder named Jocelyn (Maria Bello) whose best friend Sylvia (Amy Brenneman) is going through a split from her husband who is having an affair with another woman. Joining the two is Sylvia’s daughter Allegra (Maggie Grace) who is exploring her sexuality while leading the club is Bernadette (Kathy Baker) who knows the three as she brings in a prim French teacher in Prudie (Emily Blunt) whom she met at a Jane Austen film festival. The wild card in the group is a young man Jocelyn meets in Grigg (Hugh Dancy) who is a fan of sci-fi novels as he had never read anything of Austen as Jocelyn hopes to hook him up with Sylvia.

Robin Swicord’s screenplay does have a lot that goes on yet it is structured as it plays to each character selecting a book to read where they all come together to discuss it as well as dealing with various individual issues. Among them is Sylvia coping with her split as well as Allegra being in a lesbian relationship while Prudie deals with her marriage to her neglectful husband Dean (Marc Blucas) as she starts to fall for one of her students Trey (Kevin Zegers). While there’s some elements that are quite predictable as it relates to Jocelyn befriending Grigg, it does play into some of the elements that is expected in Austen’s work as Bernadette is also an oddball character as she had been married several times but has no regrets about it. All of which play into these characters all talking about Austen’s novels and their own interpretations it through a monthly meeting as a lot happens in these six months.

Swicord’s direction is very simple as it doesn’t aim for anything with rich or stylish visuals but rather a film that plays more into the lives of different women as it’s set in Sacramento as well as other areas in California. Swicord does go for a few wide shots for some of the scenery in California as she mostly goes for close-ups and medium shots to present the film. Swicord also create scenes that mirrors some of the stories that Austen has created as it plays to Prudie’s longing to get attention from her husband or Sylvia coping with the split from her husband Daniel (Jimmy Smits). Swicord’s approach to scenes with multiple characters to involve her going for medium shots and knowing who to focus on in the frame as it relates to the discussion about a book by Austen. Even as some of these characters would try to find themselves not just through the books of Austen but also either find new love or use these books to bring old lovers back together. Overall, Swicord creates a very engaging film about a group of people reading and finding something in the works of Jane Austen.

Cinematographer John Toon does excellent work with the film‘s cinematography to emphasize on a sepia-like look for some of the daytime exteriors along with low-key lights for the scenes set at night. Editor Maryann Brandon does nice work with the editing as it‘s very simple with a few montage cuts to play into each of the characters reading the book to begin the month as well as some rhythmic cuts. Production designer Rusty Smith, with set decorator Meg Everist and art director Sebastian Schroeder, does brilliant work with the look of the homes of the characters including Grigg‘s own visual take on Northanger Abbey.

Costume designer Johnetta Boone does terrific work with the costumes as it is mostly casual with the exception of the hippie clothes that Prudie‘s mother wears. Visual effects supervisor Carey Villegas does some fine work with the minimal visual effects in the film such as a shot of Allegra about to go skydiving and a key scene that plays into Prudie‘s own dilemma. Sound editor Michael J. Benavente does superb work with the sound as it plays into some of the things that goes on some of the characters’ home as well as some of the gatherings they go to. The film’s music by Aaron Zigman is wonderful as it‘s low-key with its mixture of folk and keyboard-based music as well as a few string-based cuts while music supervisor Barklie K. Griggs brings in an electric soundtrack of music from Paolo Nutini, Feist, Snow Patrol, Madeleine Peroux, and Aimee Mann.

The casting by Deborah Aquila, Jennifer L. Smith, and Tricia Wood is incredible as it features some notable small roles from Nancy Travis as Grigg’s guest for the final meeting, Gwendoline Yeo as a doctor Allegra meets, Parisa Fitz-Henley as a young woman that Allegra would date early in the film, and Lynn Redgrave as Prudie’s hippie mother who would often cause trouble upon Prudie’s visit she would overwhelm her daughter. Marc Blucas is terrific as Prudie’s husband Dean who doesn’t seem to understand what his wife wants as he would cancel a trip to Paris to go to a basketball game. Kevin Zegers is superb as Trey as a high school student that flirts with Prudie as he expresses some charm as well as listen to her. Jimmy Smits is excellent as Daniel as Sylvia’s husband/Allegra’s father who leaves Sylvia for another woman as he tries to make it easy for her only to make things worse.

Maggie Grace is fantastic as Allegra as a young woman trying to explore her sexuality while taking on some dangerous stunts to cope with the issues in her family. Amy Brenneman is amazing as Sylvia as Allegra’s mother who is coping with her split from Daniel as she also tries to get her life together. Kathy Baker is riveting as Bernadette as she is the leader of the club as she brings a lot of humor as well as some unique insight into the books. Hugh Dancy is brilliant as Grigg as a sci-fi reader who joins the club as someone no one knows as he doesn’t know anything about Austen yet manages to understand the world of Austen while introducing Jocelyn to the books of Ursula K. Le Guin. Maria Bello is wonderful as Jocelyn as a control freak who tries to help out Sylvia and try to hook Grigg up with Sylvia only to deal that she probably has feelings for Grigg. Finally, there’s Emily Blunt in a remarkable performance as Prudie as she is the film’s standout as a young French teacher who joins the club through Bernadette as she copes with her husband’s neglect as well as many other things as Blunt displays a sense of anguish to her performance where she manages to steal the show.

The Jane Austen Book Club is a marvelous film from Robin Swicord. Armed with a great cast as well as a captivating story about a group of people coming together to read books. It’s a film that manages to convey not just the love of books but also the works of Jane Austen and how it manages to inspire people in the world of love. In the end, The Jane Austen Book Club is a phenomenal film from Robin Swicord.

Wow. I think you're the first person I've come across who digs this film. It is a good comfy movie to relax to.

For me, Hugh Dancy's character is my fave but that's probably because he digs BUFFY THE VAMPIRE SLAYER and SF novels, esp. Ursula K. LeGuin, who I've always felt is underrated.

I've always felt Maria Bello plays kinda cold characters but I quite enjoyed her character in this one and she looks absolutely beautiful as well.

I think it's harmless as I watched it because of Emily Blunt as she was the scene-stealer for me. Plus, it's got some funny stuff and I enjoyed Hugh Dancy as he was very funny in that film. Especially with his take on Northanger Abbey. Maria Bello is great in this as she does play very cold character as she seemed to enjoy herself in this one.