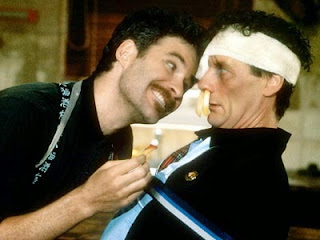 Directed by Charles Crichton and John Cleese and screenplay by Cleese from a story by Crichton and Cleese, A Fish Called Wanda is the story of a diamond heist crew who try to double-cross each other as they try to find the lost diamonds while getting a captured criminal’s barrister involved. It’s a film that plays into a world where a bunch of people are motivated by greed as a lot of hilarity ensues as it involves involving two American criminals doing their heist in London. Starring John Cleese, Jamie Lee Curtis, Kevin Kline, Tom Georgeson, Maria Aitken, Cynthia Cleese, Patricia Hayes, and Michael Palin. A Fish Called Wanda is an absolutely ripping and enthralling film from Charles Crichton and John Cleese.

After a diamond heist involving two Britons and two Americans that succeeded only for its aftermath to go wrong where the diamonds are lost and one of its lead criminal figures gets arrested. The American con-artist and her weapons-man boyfriend try to find the diamonds as the former tries to seduce a barrister into getting information only to fall for him. It’s a film that plays into the world of greed as many characters all try to double-cross each other to get the diamonds and run away to South America with the loot as a lot of mayhem and hi-jinks ensue. Yet, it’s really more about a group of individuals who all seek a better life or some kind of hefty payment as two of them are these Americans in Wanda (Jamie Lee Curtis) and her boyfriend Otto (Kevin Kline) as the latter is a loud-mouthed man who hates the British and thinks of himself as an intellectual.

Among the crew they’re with is the gangster George Thomason (Tom Georgeson) who would be arrested for the heist as he awaits trial and his right-hand man in an animal lover named Ken (Michael Palin) who has a bad stutter. John Cleese’s screenplay plays into many events that unfold where Wanda would try and seduce George’s barrister Archie (John Cleese) as she would eventually make Otto very jealous as he would confront Archie in very troubling ways. Yet, Archie falls for Wanda as he sees her as a chance to escape the unhappy life he has with a wife (Maria Aitken) who treats him like shit and a spoiled daughter (Cynthia Cleese) as he would eventually go on board to try and find the diamonds. One notable subplot that is integral to the story involves Ken’s attempt to kill an old lady (Patricia Hayes) who is a witness to George’s case where it plays into elements of black comedy. It adds to the film’s offbeat humor that includes some very funny dialogue and one-liners which often involve Otto’s hatred towards the British as he would always yell “asshole” towards a driver in his way.

The film’s direction by Charles Crichton, with Cleese serving as an un-credited co-director, is quite simple in terms of compositions and such. Notably in the way Crichton and Cleese would set up some of the comedy as they would shoot the film entirely on location in London as well as parts of Heathrow Airport. The film’s heist sequence that happens early is quite engaging for some of the angles that Crichton would create along with key shots that would play into the story. Critchton’s approach to dark humor that involves Ken’s attempt to kill an elderly witness has this strange mix of cruelty and hilarity as it relates to Ken’s love for animals and what he was trying to do. Other scenes involve Otto’s love to say things in Italian and Russian to turn Wanda on which is inter-cut with the life of Archie and how drab it is. The humor also has elements that are quite cartoonish as well as offbeat moments such as a scene where Archie meets Ken in the third act as Archie waits for Ken to give him some answers. Its climax at Heathrow wouldn’t just contain some of the funniest moments in the film but would also become one of its most adventurous. Overall, Crichton and Cleese create a very thrilling and hilarious film about a group of thieves trying to get back some diamonds.

Cinematographer Alan Hume does excellent work with the cinematography as it‘s quite straightforward for many of its daytime scenes along with some nice lighting for some of the scenes set at night. Editor John Jympson does amazing work with the editing as it‘s very straightforward with some rhythmic cuts for the heist scene and the film‘s climax at Heathrow. Production designer Roger Murray-Leach, with set decorator Stephenie McMillan and art director John Wood, does fantastic work with the look of the loft that Ken lives in as well as Archie‘s posh home and the place he and Wanda would go into for sex until a family comes in.

Costume designer Hazel Pethig does nice work with the costumes from the stylish clothes that Wanda wears to the more casual look of the men. Sound editor Jonathan Bates does terrific work with the sound from the way Otto screams “asshole“ in a few scenes to some of the comedic moments that occur in the film. The film’s music by John du Prez is brilliant for its score as it ranges from orchestral to very playful pieces as it adds some spark to the film’s humor and some string-based pieces into Otto’s antics.

The casting by Priscilla John is wonderful as it features some notable small appearances from Stephen Fry as a Briton Otto meets at the airport, Geoffrey Palmer as the trial judge, Cynthia Cleese as Archie’s spoiled daughter Portia, and Patricia Hayes as the old lady with the three Yorkshire Terriers who saw George during his escape. Maria Aitken is terrific as Archie’s very un-loving and pretentious wife who is more concerned with her riches rather than her marriage. Tom Georgeson is excellent as George as a gangster who leads the heist as he would be arrested as he hopes that Archie would get him out. Michael Palin is brilliant as Ken as an animal-loving man with a stutter who bungles his way to get rid of a key witness as Palin brings a lot of humor including some scenes where he is eyed by Otto as if he was gay or the scene involving some chips.

Kevin Kline is incredible as Otto as an Anglophobe man who hates being called stupid as Kline manages to steal the show with such energy and charm as he continuously brings in a lot of laughs from the things he says to some of the things he does in the film. Jamie Lee Curtis is fantastic as Wanda as a con artist who is eager to get the diamonds and double-cross Otto so she can escape from his clutches but finds herself falling for Archie when she’s supposed to seduce him as Curtis brings a lot of spark to the role. Finally, there’s John Cleese in a remarkable performance as Archie as a barrister who is roped into the scheme as he falls for Wanda while dealing with Otto and his own family life where Cleese brings a low-key approach to the humor as well as a very funny exchange against Kline in the film’s climax.

Love this movie. Kevin Kline is hilarious and I agree he steals the show. The scene in bed with his sister is kind of weird though. "Don't ever, ever, ever call me stupid, ok?". So quotable.

Saw this movie way back when it came out on VHS...VHS!!! I was a kid and don't remember much about it other than my mom liked it more than I did. I probably wasn't ready for it. Need to go back and revisit.

@Chris-It is so quotable. I watch it every time it's on. It's so fucking hilarious. Kevin Kline is in top form. I'm surprised that he beat the likes of Sir Alec Guinness, River Phoenix, Martin Landau, and Dean Stockwell. Yet, he deserved that Oscar.

@Wendell-I kinda miss the days of VHS although I'm more than content w/ the world of DVDs. See it again man, it is so fucking hilarious.

Kline's performance is the stuff of legends!

@Fisti-It is totally legendary and still so funny. I heard that during that scene where he and Jamie Lee Curtis were having sex. Jamie had to put a pillow on her head to prevent herself from laughing when Kline did that O face. That must've been a fun set to be in.