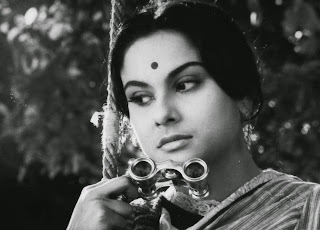 Based on the novel Nastanirh (The Broken Nest) by Rabindranath Tagore, Charulata is the story of a housewife in late19th Century India who tries to find love and herself through art. Written for the screen, scored, and directed by Satyajit Ray, the film is an exploration of a woman coming into her own during a period in pre-independence India where a woman copes with her unhappy marriage and the trappings of being a housewife. Starring Soumitra Chatterjee, Madhabi Mukherjee, Sailen Mukherjee, and Shyamal Ghosal. Charulata is a ravishing and enchanting film from Satyajit Ray.

Set in 1870s India during a Bengali Renaissance period, the film revolves around the titular housewife (Madhabi Mukherjee) who finds her own artistic voice following a visit from her husband’s poetic cousin as she would fall for him while dealing with her husband’s attempt to create a powerful newspaper for India. It’s a film that plays into not just some of the social changes that is emerging in India but also a world where there’s various people trying to find their voice in an era where they’re still being governed by the British. Amidst all of these political and social changes that is happening, it is this housewife of a newspaper editor that would find some change through meeting her husband’s cousin while dealing with the presence of her brother and his spoiled wife as the former is working with his brother-in-law.

Satyajit Ray’s screenplay doesn’t just explore Charulata’s desire to find her own voice and meaning in her life but also in a world that is changing as her husband Bhupati (Sailen Mukherjee) is hoping to give the Bengalis a newspaper of their own with a political voice. His work would definitely absorb him as he doesn’t mean to neglect his own wife because he feels like he is doing something that matters. Upon the arrival of his cousin Amal (Soumitra Chatterjee), Charulata is a little taken aback by his very lively and playful presence but is intrigued by his love of poetry and how talented he is. Through Amal’s encouragement, Charulata would find her own artistic voice through writing but also in her skill in sewing. While Charulata falls for Amal and vice versa, neither are willing to create trouble as the film’s third act plays to some misfortunate events that would affect Bhupati due to an act of betrayal of someone close Bhupati and Charulata.

Ray’s direction is very engaging not just in his approach to close-ups, zoom lenses, and compositions. It’s also in how he is able to create a drama that feels very contemporary at a time where it is about a country trying to forge its own identity. Ray’s direction has an intimacy as it plays into a typical life of an upper-class couple living in India as Bhupati uses his home as a place where he can work while Charulata would often spend time alone or with her spoiled sister-in-law. Ray’s usage of close-ups and medium shots would maintain that sense of intimacy while he knows where to frame his actors for a shot as it often used as an emotional tool. The direction also have these lively moments such as Charulata on a swing which captures everything in a close-up while there’s another shot of her in the background while Amal is lying on the ground in the foreground.

Ray also creates some dizzying imagery as it relates to Charulta’s own sense of artistic awareness in this element of surrealism that seems like it is from another memory. There are moments in the film where music help plays into the story as Ray is also the film’s music composer as he brings in some enchanting themes that would underscore much of the film’s drama. Even as he would put in songs by Baiju Bawra, Joyeb, Nidhubabu, Raja Rammohan Roy, Tansen, and the film’s original novelist Rabindranath Tagore into the mix as it help plays into the drama. Especially in its third act where betrayal and disappointment would emerge as Ray’s camera knows where to step back as well as present something where there’s an ambiguity for the film’s ending. Especially in the way he would approach the ending as it is told with such style. Overall, Ray creates a captivating yet engrossing drama about a housewife finding her voice in 19th Century India.

Cinematographer Subrata Mitra, with lighting by Satish Haldar, does amazing work with the film‘s black-and-white photography with its approach to naturalistic lighting for the daytime scenes along with some low-key lights and moods for some of its nighttime moments including the key scene where Bhupati reveals to Amal about what happened to him. Editor Dulal Dutta does excellent work with the editing as it is mostly straightforward with the exception of a dizzying montage with its inspired usage of dissolves to play into Charulata‘s own artistic growth. Art director Bansi Chandragupta does fantastic work with the look of Charulata‘s home as well as Bhupati‘s office and printing press where he does his work. The sound work of Nripen Paul, Atul Chatterjee, and Sujit Sarkar is brilliant for the sparseness of the sound as well as the way wind sounds in some of the film‘s key moments.

The film’s incredible cast include some notable small roles from Bholanath Koyal as a house servant, the musician Joyeb as a party performer, Suku Mukherjee and Dilip Bose as a couple of colleagues of Bhupati, and Gitali Roy as Charulata’s bored and spoiled sister-in-law Manda who is also attracted to Amal. Shyamal Ghoshal is terrific as Charulata’s brother Umapada who is hired to manage and watch over the finances of Bhupati’s newspaper as he is someone that is very inexperienced while being someone that Amal doesn’t trust. Shailen Mukherjee is amazing as Bhupati as a newspaper editor who unintentionally neglects his wife as he is eager to make his newspaper mean something as well as hoping for some change for India despite being under British rule at that time.

Soumitra Chatterjee is brilliant as Amal as this young poet that is eager to make as a writer with his cousin’s help as he also inspires Charulata to find her voice as he struggles with his feelings towards her and his loyalty to his cousin. Finally, there’s Madhabi Mukherjee in a radiant performance as the titular character as this housewife who feels lonely and trapped by her surroundings as she meets and falls for her husband’s cousin which would inspire her to find an artistic voice as she also copes with not wanting to hurt her own husband once his whole world begins to fall apart as it’s an intriguing and complex performance.

Charulata is an astonishing film from Satyajit Ray that features top-tier performances from Madhabi Mukherjee, Soumitra Chatterjee, and Shailen Mukherjee. It’s a film that isn’t just an intriguing study of change and the need to say something in a world that is changing. Especially as it plays to India trying to find its own voice years after breaking away from Britain as it manages to be so much without the need to say something politically but rather emotionally. In the end, Charulata is a spectacular film from Satyajit Ray.

Wow, this film sounds excellent. I've never even heard of it. I need to see this now, great write up!

Thanks. I thank Wes Anderson for introducing me to Satyajit Ray as one of the film's score pieces was in Anderson's films. It's considered one of his best and I'm hoping to do more Ray in the future as I'm excited that the Apu Trilogy is coming to Criterion later this year.

I'm right there with Britt! Never heard of this, but I can't wait to see it now.