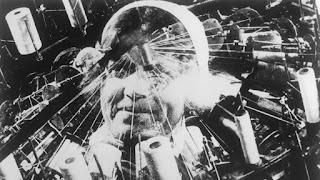 Written and directed by Dziga Vertov, Man with a Movie Camera is an avant-garde film that explores the life the Soviet Union in its early years told in an unconventional fashion. The film is more about cinematic techniques to help tell the story of day-to-day life between those working in the urban environments in the Soviet Union. The result is truly one of the most imaginative and exhilarating films ever created.

The film is a simple story of a cameraman trying to capture everything he sees in the Soviet Union whether it’s the birth of a child, athletic events, people on the beach, workers in a factory, and everything else. All of which is seen by an audience at a movie theater where it plays into the idea of what cinema could be and what it has to say about everyday life. Since there isn’t any plot nor any real central characters other than the cameraman who is played by the film’s cinematographer Mikhail Kaufman. Instead, it’s all about the image and what it says where it plays into a cameraman trying to see what he can do and how to present it as if it was a movie.

Dziga Vertov’s direction is very imaginative from the way he opens the film to what he would present for his audience. With the aid of cinematographer Mikhail Kaufman and editor Elizaveta Svilova, Vertov goes for something where narrative doesn’t exist and just makes up as he goes along with it. Through Kaufman’s dazzling black-and-white photography and Svilova’s stylish editing, the film is about style where Vertov goes for all kinds of compositions from slanted camera angles, having the camera be upside down, creating multiple exposure and dissolve shots, and moments that are out of this world. It plays into the idea that the camera is the character and the camera is capturing everything that is happening in the film.

Some of it is presented in a simple format while other things are presented with something that is very dizzying to the way the world is to reflect on the Soviet Union coming into its own following the aftermath of the Russian Revolution and its civil war. Even as it shows the Soviet Union in peaceful moments where children enjoy watching a magic show or people going to the beach for a good time. Adding to the film’s charm is the music as the film has been released with different kinds of music through several reissues since its 1929 release. The most well known version is from a 2002 reissue that features a score by Jason Swinscoe and is performed by the electronic-jazz group The Cinematic Orchestra where its mixture of jazz and electronic music helps play into the energy of the film.

Man with a Movie Camera is an incredible film from Dziga Vertov. It’s a film that displays some of the best examples of what experimental cinema is and how accessible it can be. Especially as it’s not afraid to be daring and weird but also has a sense of charm in what it says about everyday life in the former Soviet Union. In the end, Man with a Movie Camera is a magnificent film from Dziga Vertov.

I put this on my Netflix list a few months back and just haven't gotten to it yet. I should get on that.

@Brittani-Thanks. I wanted to do something challenging and weird as a Blind Spot as it's one of several films that is in BFI's list of the greatest films ever. Now that list of films they've mentioned is getting smaller. Yay!

I love how groundbreaking and experimental this film is. And the fact that it still holds up today is fucking incredible.

@Alex-Totally. I had a electro-jazz as the soundtrack and it definitely caught my attention and helped get into the film. It's awesome.