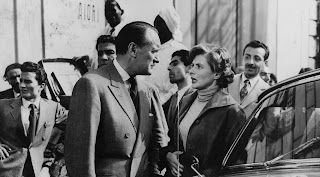 Based on the novel Duo by Colette, Journey to Italy is the story of a couple traveling to Italy on a holiday as they cope with their disintegrating marriage. Directed by Roberto Rossellini and screenplay by Rossellini and Vitaliano Brancati, the film is an exploration of couple’s attempt to save their marriage on a vacation through countryside in Naples as they deal with themselves. Starring Ingrid Bergman, George Sanders, Maria Mauban, Anna Proclemer, and Leslie Daniels. Journey to Italy is an evocative film from Roberto Rossellini.

Set largely in Naples, the film explores a married couple traveling to the Italian city and its nearby surroundings hoping to save their marriage as they both cope with the loss of a friend and a villa they plan to sell. During the course of their Italian vacation, Alex (George Sanders) and Katherine Joyce (Ingrid Bergman) find themselves out of step with each other and in the activities they want to do. While it’s a story that doesn’t have much of a plot, it is about the slow disintegration of a marriage as it is told in the matter of days where Alex is fed up with Katherine’s obsession for museums and historical landmarks as it relates to a friend of theirs. Katherine feels that Alex has been spending too much time either working or socializing with their friends as the film’s script plays into the tension as much of the second act plays into the two spending time with other people. It then leads to this very dramatic third act where the two go to Pompeii where all of these emotions between the two finally come to ahead.

Roberto Rossellini’s direction is quite intoxicating for not just the usage of the different locations in Italy such as the island of Capri, Pompeii, and Naples but also in how it plays into a couple’s attempt to save their marriage in this beautiful country. Rossellini’s usage of wide and medium shots help play into the majestic look of the locations as well as the growing dissolution between Alex and Katherine. There aren’t a lot of close-ups except in certain locations of where Katherine goes including some of the ruins of Pompeii and the volcanic landscape nearby. Yet, there are moments where it adds to the sense of despair as well as scenes where Alex encounters temptation as he ponders whether or not he should make things worse. The film’s climax in Pompeii doesn’t just play into what Alex and Katherine discover but also questions about whether or not they should try to work it out or call it quits. Overall, Rossellini creates a compelling yet touching study about marriage and its complexities through a couple on vacation in Italy.

Cinematographer Enzo Serafin does excellent work with the film‘s black-and-white photography to play into some of the nighttime interior/exterior scenes set at night as well as some of the interiors of the museum and landmarks that Katherine goes to. Editor Iolanda Benvenuti does fantastic work with the editing as much of it is straightforward with some rhythmic cuts in the early scenes set on the road as well as in the film‘s climax at a ceremony in Naples. Production designer Piero Filippone does amazing work with the look of the villa and the rooms in the villa that Alex and Katherine live at. The sound work of Eraldo Giordani is superb for some of the moments that occur from usage of live music heard in the streets to some of the raucous moments in the city of Naples. The film’s music by Renzo Rossellini is brilliant for its orchestral-based score mixed in with traditional Italian folk music to play into the world of Italy as well as the lush string arrangements to play into the dramatic elements of the film.

The film’s terrific cast include some notable small roles from Leslie Daniels and Natalia Ray in their respective roles as friends Tony and Natalie Burton, Paul Muller as the villa house sitter Paul Dupont, Anna Proclemer as a young prostitute Alex picks up, and Maria Mauban as a friend of Alex and Katherine in Marie who tries to flirt with Alex. George Sanders is marvelous as Alex Joyce as a workaholic businessman who tries to move on from the death of a friend as he later goes on his own as he tries to ponder his own feelings about himself and his wife. Finally, there’s Ingrid Bergman in a remarkable performance as Katherine Joyce as a woman trying to cope with loss as well as a marriage that is disintegrating as she goes to various Italian landmarks in order to try and comprehend everything is happening to her and her marriage as it’s a very radiant performance from Bergman.

Journey to Italy is a spectacular film from Roberto Rossellini that features great performances from Ingrid Bergman and George Sanders. It’s a film that isn’t just a captivating drama that explores a couple coming apart but also a film that plays into people taking on two different journeys to find themselves in Italy. In the end, Journey to Italy is a phenomenal film from Roberto Rossellini.

You're welcome. After all, we all need to see the films of Roberto Rossellini and the stuff he did with Ingrid Bergman.

I like the dialogue, and agree Ingrid Bergman is remarkable.

I wish they had not picked George Sanders to play her husband, to me he is a mediocre actor, with a monotonous voice, always the same in every performance.

@Chris-I know Sanders' voice was probably dubbed in the film but I think it did help though I think it's the only film that I've seen him in so far.

Traveling to Italy to save a marriage... hmmm now that's an idea! I'm happily married but I'll keep this idea in mind, ahah. In any case, I'm intrigued about this one based on your review, plus I LOVE Ingrid.

@ruth-It's not a conventional film though it would set the tone for some of the films Michelangelo Antonioni did yet it is still quite accessible.