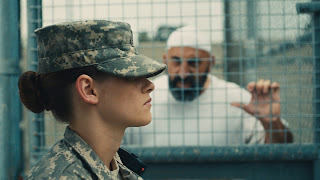 Written and directed by Peter Sattler, Camp X-Ray is the story of a young woman who works as a guard in Guantanamo Bay in Cuba where she befriends an Arab prisoner. The film explores the world of Guantanamo where a woman tries to maintain her role as a guard where she wonders if the man she befriends is really innocent. Starring Kristen Stewart, Peyman Moaadi, Joseph Julian Soria, Lane Garrison, and John Carroll Lynch. Camp X-Ray is a compelling and mesmerizing film from Peter Sattler.

Set in Guantanamo Bay at the infamous prison where many detainees are at under watch by military personnel, the film revolves around a young woman who arrives at the prison where she befriends a detainee who already has a notorious reputation for being unruly. It’s a film that explores a young woman not just dealing with this job that she has to do but also wonder who are these men that are detained in this island and are some of them really innocent. Even as she meets one of the detainees who is always talking and causing trouble where they would often have conversations.

Peter Sattler’s script doesn’t rely much on plot but rather base itself on characters connecting with one another as Private First Class Amy Cole (Kristen Stewart) doesn’t just try to adjust to her new environment but also knowing the rules and such. For about eight-to-nine months, Amy would work in the day shift where she would spend nights at her apartment where she would sometimes socialize with other guards but becomes increasingly isolated as time goes on with only the detainee Ali (Peyman Moaadi) that she can connect with. Ali is a man that likes to read as he would often ask Cole many questions where the two would get friendly as time goes on but things would become complicated when Cole would see first hand in the abuse Ali and the other detainees would endure. Much of it would involve a lot of questions of morality into how these detainees are treated as Cole would ask questions about what are they doing and are they the good guys and the detainees are the bad guys.

Sattler’s direction is very engaging for not just the intimacy that is created but also an engrossing one considering that much of it is set inside the prison. While the film is actually shot in California as parts of Guantanamo Bay and its nearby residents set in the U.S., the film does play into a world that is quite cut off from nearly everything else. Even for the two protagonists in the film though Ali has been in the prison for nearly eight years while Cole is someone who comes from a small town in Florida as she is new to this environment. While there are some close-ups and medium shots in the film that occurs, it’s in the close-ups where Sattler really captures the heart of the story from the way Cole and Ali would engage each other in conversations. Some of the medium shots such as a scene where Ali is at a cell outside where he and Cole talk while he plays soccer shows that there is a bit of humor despite how serious the film is.

The scenes inside the prison showcase how it is operated where it has these rules that every guard must do including the kind of things they have to do when things get hectic. Notably in one of the film’s early scenes where Cole has to participate in taking down a prisoner where she was elbowed and spit at where she does retaliate. There are moments where the drama is quite gripping where Cole had to learn exactly what Ali would endure due to an incident that she was involved in as well as another moment that made her and Ali uncomfortable. Even to the point where Cole had to learn the realities of her role which she had tried to maintain in her job but it becomes uncomfortable as well as draining emotionally and mentally not just for her but also for Ali who endures the inhumanity of his imprisonment. Overall, Sattler creates a riveting yet harrowing drama about a friendship between a Guantanamo prison guard and a detainee.

Cinematographer James Laxton does excellent work with the film‘s cinematography from the interiors set inside the prison in day and night where it is quite cold though colorful while some of the exteriors are bright and colorful yet the scenes at night display more stylish lighting schemes. Editor Geraud Brisson does nice work with the editing as it‘s mostly straightforward with a few jump-cuts to play up to some of the drama that occurs in the film. Production designer Richard A. Wright, with set decorator Adam Willis and art director Joshua Locy, does brilliant work with the design of the prison and its many interiors in the rooms, cells, and mess halls where many of the characters are at.

Costume designer Christie Wittenborn does terrific work with the costumes from the uniforms the soldiers wear to the clothes the detainees wear which play into a world that is about order and nothing else. Visual effects supervisor Tim Carras does fine work with some of the film‘s minimal visual effects from some of the exteriors surrounding the prison to the events that occur much early in the film such as Ali‘s capture. Sound editor Michael Perricone does superb work with the sound as it plays into not just the tense atmosphere of the prison but also how quiet it is which adds to the tension in the film. The film’s music by Jess Stroup is wonderful for its ambient-based score that is very low-key as it helps underscore some of the drama while music supervisor Margaret Yen brings in a mixture of music from rock and hip-hop during a scene where the guards party.

The casting by Richard Hicks is great as it features some notable small performances from Mark Naji as the most troublesome detainee at the prison, Cory Michael Smith, Ser’Darius Blain, and Tara Holt as other guards new to the prison, and Julia Duffy as Cole’s mother whom she speaks to via Skype. John Carroll Lynch is superb as Cole’s superior officer Colonel Drummond who tells Cole the role she has to play while displaying some revelations about his own assignment. Joseph Julian Soria is terrific as PFC Cruz who starts off as the most naïve guard of the group only to become just as much as a dick as some of the people in the prison. Lane Garrison is excellent as Cpl. Ransdell as a guard leader who shows everyone what to do as he would start off show interest in Cole only to put her into situations that are considered very humiliating to her and to Ali.

Peyman Moaadi is amazing as Ali as this detainee who is taken from his home as he’s been in Guantanamo for nearly eight years as he deals with his situation and ponders if there is any kind of humanity in the guards as he converses with Cole. Finally, there’s Kristen Stewart in an incredible performance as Pfc. Amy Cole as this young woman from a small town who tries to find some kind of importance as an army guard where she unknowingly befriends Ali where she copes with not just his situation but also in the brutality and humiliation that occurs where it’s a restrained yet rapturous performance from Stewart that proves she can do so much by displaying very little.

Camp X-Ray is a remarkable film from Peter Sattler that features great performances from Kristen Stewart and Peyman Moaadi. It’s a film that doesn’t just explore what goes on inside one of the most infamous prisons in the world but also a look into people from different sides and philosophies of the world connecting to see if there’s any kind of hope in a world that is very complicated. In the end, Camp X-Ray is a phenomenal film from Peter Sattler.

Beautiful review. I loved this movie so much, I wish I could've seen it in theaters. I would've gladly thrown my money at it. Moaadi is such a fantastic actor and I hope to see him in more things in the future, and Stewart is brilliant.

I've heard lots of good things about this one, including Stewart's performance. I have to see it to believe it because I'm not sure she can be excellent. To be fair, I thought she was pretty good in The Runaways, though.

@Brittani-I really liked Peyman Moaadi in this film as I realized he's the same guy from A Seperation. I hope he gets more exposure as well as should all actors from around the world and yes, Stewart was awesome.

@Wendell-I blame those Twilight movies as it definitely held back whatever potential some of the actors had in what they can do. It's a good thing Stewart chose to do films that are out of the radar as she is great in this as I would also recommend Clouds of Sils Maria as well which she is amazing in.