Twin Peaks: Fire Walk with Me 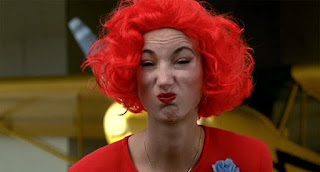 Directed and sound designed by David Lynch and screenplay by Lynch and Robert Engels that is based on the TV series by Lynch and Mark Frost, Twin Peaks: Fire Walk with Me revolves around the final days of Laura Palmer before her murder as well as the events before and after the events of the TV series. The film is a prequel/sequel of sorts to the series as it relates to the mysterious murders of a young woman and another young woman who would be connected to the murder as aspects of her life are unveiled. Starring Kyle MacLachlan, Sheryl Lee, Moira Kelly, Chris Isaak, Harry Dean Stanton, Ray Wise, and Keifer Sutherland. Twin Peaks: Fire Walk with Me is a gripping yet mesmerizing film from David Lynch.

The film explores not just the final days of the life of Laura Palmer (Sheryl Lee) who was a major subject in the TV series but also in the events that preceded her murder as it relates to the death of a young woman named Teresa Banks (Pamela Gidley). It’s a film that isn’t just about a young woman falling apart in her final days but also dealing with the revelations about the mysterious figure that had been stalking her as he would eventually become her killer. The film’s screenplay by David Lynch and Robert Engels does have an odd structure in terms of its narrative. Notably in its first act as it relates to Banks’ murder where Special Agent Chester Desmond (Chris Isaak) investigates with Sam Stanley (Kiefer Sutherland) as they find some things that relate to the murder and then something happens that stops the case that includes the sudden re-appearance and disappearance of the FBI agent Phillip Jeffries (David Bowie).

The film’s second and third act plays into Laura Palmer’s final days as she copes with being in a multitude of relationships with other men, a drug problem, and the mysterious appearance of a man named Bob (Frank Silva) who had been stalking her. Then there’s her father Leland (Ray Wise) whom she believes might actually be Bob as well where there are some revelations about his own past and such. Still, it raises questions about not just his relationship with Laura but also other things about him that definitely becomes puzzling. Even as there’s moments in Laura’s own world where she sees things as it relates to characters whom she had never met nor were part of the series in the beginning start to appear for some strange reasons. Those are among some of the flaws in the script as well as these surreal moments about this mysterious world that is the Black Lodge where Bob supposedly lives in.

Lynch’s direction is quite simple at times for the way he shoots the many locations in the Pacific Northwest while he would add things that are surreal such as Desmond and Stanley given a message from a mute woman in a red dress. It plays into this strange mix of Americana and European surrealism where Lynch does create some simple compositions and such in his close-ups, medium shots, and wide shots yet will find a way to play with these elements. The film’s first act which revolves around the Banks case where Special Agent Desmond is leading the investigation play into a world that is corrupt as Desmond and Stanley were forced to do things by themselves.

By the time the story moves to the second act at the small town of Twin Peaks, it plays into the town and what it was like during Laura Palmer’s final days. Still, there are odd moments as it relates to not just some of the characters from the TV show but also the ones who either were on the show but don’t appear in the film or those who come into the show very late into the series. The direction would feature these point-of-view shots as well as moments that add to the surrealism that includes key moments in the third act that plays into Laura’s final day including her death. Even as it relates to those involved and what could’ve been done to save her. Overall, Lynch creates an eerie yet intoxicating film about a young woman’s final days in a small town.

Cinematographer Ron Garcia does brilliant work with the film‘s cinematography with its usage of lights including blue lights as well as some naturalistic images for some of the scenes set in the day. Editor Mary Sweeney does excellent work with the editing as it play into the drama and suspense while creating some cutting styles and montages that are bizarre which delve into the moments that are unexplained. Production/costume designer Patricia Norris and set decorator Leslie Morales do fantastic work with the set design including the Palmer home, the Roadhouse bar, and the mysterious red room where the Man from Another World is from while the costumes are quite stylish to play to what Laura wore in her bawdy moments as well as the suits of the FBI agents.

Sound editor Douglas Murray and sound designer David Lynch do amazing work with the sound to play into some of the sound effects that occur in the film as well as in the atmosphere in some of the events that go on including the scenes where Bob would be around lurking towards Laura. The film’s music by Angelo Badalamenti is incredible as it’s the highlight of the film with its mixture of orchestral, blues, dream-pop, and ambient music that features variations of themes from the TV show as well as some somber themes that play into the drama and tragedy of the film as the music includes contributions by Julee Cruise who appears as the singer at the Roadhouse bar.

Other notable small roles include Kimberly Ann Cole as the mute woman in red, Rick Aiello as deputy Howard who tries to antagonize Special Agent Desmond, Gary Bullock as Sheriff Cable, Jurgen Prochnow as a mysterious woodsman at the Black Lodge, Pamela Gidley as Teresa Banks, and Harry Dean Stanton in a terrific performance as a trailer park landlord who is trying to make sense about what happened. David Bowie is superb in a small role as the FBI agent Phillip Jeffries who had disappeared two years earlier as he suddenly appears talking about the Black Lodge. Kiefer Sutherland is excellent as Agent Sam Stanley as a man who has quirks that allow him to see things where would make a chilling discovery as it relates to Teresa Banks’ body. Frank Silva is fantastic as Bob as the evil killer who may or may not be real as he stalks Laura as he might also be involved in Banks’ death. James Marshall and Dana Ashbrook are brilliant in their respective roles as James Hurley and Bobby Briggs as Laura’s two lovers with Marshall as the sensitive Hurley and Ashbrook as the more troublesome Briggs who both cope with Laura’s offbeat behavior.

Kyle MacLachlan is amazing as Special Agent Dale Cooper who deals with the chaos over the Banks case as he waits for what will happen next as he would later become a key figure in the Palmer case. Moira Kelly is pretty good as Donna Hayward as Laura’s best friend who tries to deal with Laura’s behavior as Kelly brings a more low-key approach to the character that is played by Lara Flynn Boyle in the TV show. Ray Wise is remarkable as Leland Palmer as Laura’s father who hides a dark secret as it relates to a lot in what is happening as it’s an ambiguous but underwritten role that loses some of its intrigue. Finally, there’s Sheryl Lee in an incredible performance as Laura Palmer as this troubled young woman who deals with a severe drug problem as well as juggling relationships and a stalker as Lee brings a lot of weight and anguish to the performance of a young woman who is living on the edge.

Twin Peaks: Fire Walk with Me is an excellent though flawed film from David Lynch. While it does sort of deviate from elements of the TV series while focusing more on the events that related to Laura Palmer’s final days. As a standalone film, it is quite exhilarating and strange that manages to be out there but also riveting. For those who are fan of the TV series, the film serves as a fitting companion piece despite some of its flaws. In the end, Twin Peaks: Fire Walk with Me is a brilliant film from David Lynch.

While I love the series, as a whole it took a tough decline in quality after it was revealed who the killer was. This movie goes back to the beginning and extracts the goofy moments that gave the series its quirky edge and instead opted for darker, harsher moments. Instead of asking the audience to identify with the man who tries to solve the crisis, we have to identify with the victim whose life provides the crisis. It deliberately rejects the hallmarks of the show. That takes guts. One of his best works.

Yeah. I took a detour by just going straight to the film and then go back to the rest of the series in the 2nd season. I heard that things fell apart after the killer was revealed. The film itself I think is alright though it is flawed. It didn't deserve the critical bashing it received.

I remember feeling it was quite different to the tv-show. I'm not usually a fan of prequels due to the predictability of the future. However this one was quite intriguing, especially for those curious about Laura Palmer's life. It felt like a horror film, while the tv-show didn't. A shame the film got released at the wrong time when mainstream interest in the tv-show was in decline.

@Chris-I think the reason it wasn't so well-received at the time was because the fans of the show were still left with a bitter taste over how the season ended and were upset by the film even more. I think it took years for them to finally accept the film for what it is. It maybe a flawed film by David Lynch but certainly a gripping horror film of the highest order.

Along with BLUE VELVET, FWWM is Lynch's masterpiece, IMO. It takes a bit of adjustment after watching the T.V. show but its brutality and strangeness fit comfortably in with the rest of Lynch's filmography. It is really an incredibly harrowing, atmospheric descent into hell and as close as Lynch has come to making up a straight-up horror film.

For me, Mulholland Dr. is Lynch's best work while I do think Fire Walk with Me deserves some reassessment as it is one of the first films of Lynch that I saw in my teens and was just ravished by its visuals and music. I don't think the film is a masterpiece but certainly misunderstood.