The Decline of Western Civilization Part II: The Metal Years 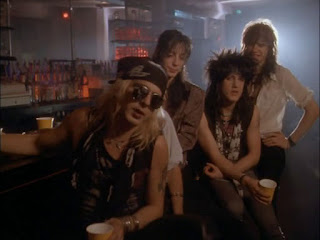 Written and directed by Penelope Spheeris, The Decline of Western Civilization Part II: The Metal Years is the second part of a trilogy of documentaries that explores the music culture in Los Angeles. In this film, Spheeris covers the music scene at the Sunset Strip in the late 1980s where it was the hottest music scene at the time where glam-metal was ruling the charts as Spheeris doesn’t just interview acts from that scene who were popular at the time but also emerging bands and the scene itself. The result is a fascinating as well as eerie film from Penelope Spheeris.

Shot in late 1987 to early 1988, the film explores the heavy metal music scene at the Sunset Strip in Los Angeles where several bands are trying to get signed and become rock stars while older and more established acts are interviewed to talk about the ups and downs of the world of rock stardom. At the same time, fans and wannabe musicians are interviewed where they express their dreams of stardom as well as the world of heavy metal culture where it’s often misunderstood and ridiculed. Even as their treatment of women is shown in not a very good light at times though the women themselves do get interviewed as some prove to be very engaging while others show that they’re not very smart.

Director Penelope Spheeris manages to cultivate a lot of what is going on as it pertains to the culture where bands like Faster Pussycat, Lizzy Borden, Seduce, London, and Odin were among these new bands trying to get signed where Faster Pussycat would be the only band of the four to have some success as they were portrayed as guys who are driven but also realistic as opposed to the other bands. Even some of wannabe musicians when they’re asked what if they don’t make it. They tend to brush off the answer claiming they will as it plays to not just the lack of realism they have about their goals but also show how delusional they are despite their determination to succeed. At the same time, the bands that are profiled such as London and Odin both come across as arrogant where the former do claim they’re not role models though they also come across as buffoons.

The film would feature an interview with a woman who is part of a movement that is trying to get rid of heavy metal as she claims the malocchio/devil horns hand gesture as Satanic and claims it’s about the numbers 666. It’s a moment that doesn’t just show how idiotic not just these authority figures are but also the sense of ignorance about those who have very little clue abut the culture of metal. Even as some of the older musicians like Steven Tyler and Joe Perry of Aerosmith, Lemmy Kilmister of Motorhead, and Alice Cooper provide some commentary about that ignorance as they would tell their own stories about how they feel to be imitated and such though they are among the intelligent individuals in the film as does Dave Mustaine and Dave Ellifson of Megadeth who would perform for the film.

With the aid of cinematographer Jeff Zimmerman and sound recordists Ara Ashjian and Gregory Cheever, Spheeris captures not just the energy of the scene but also some of the sleazy elements of it. Especially in its portrayal to women where women would have to wear sleazy clothes to get into a club co-owned by future MTV Headbanger’s Ball host Riki Rachtman as well as a much older club owner who holds an annual contest to see who is the darling of the club. Unfortunately, some of these women don’t put themselves in a good light as many of them don’t sound very smart. At the same time, there’s moments where Spheeris wants to be serious yet Gene Simmons and Paul Stanley of Kiss put themselves in very tacky settings. Simmons at a lingerie store and Stanley on his bed with three women on him as they have this arrogance about not doing drugs while Simmons says he gets laid and the Pope doesn’t.

While Tyler, Perry, and Cooper each provide their own insights about their addictions in the past, the interview with Ozzy Osbourne at someone else’s kitchen reveal not just the downside of stardom but also what he’s gained as he also states that rehab sucks. Then there’s the sequence with Chris Holmes where he is in his pool on a chair with his mother watching as he is carrying vodka bottles as he would pour it all over himself. With the aid of editor Earl Ghaffari, Spheeris would keep things straightforward while creating unique narrative strands to tie the stories together.

I've been listening to metal bands from the 80s this year + doing a documentary marathon, so I should check this one out. By the way, which do you consider the best of the three films?

Right now, I would say the third one as I was moved more by that one because of what the music scene had evolved into as well as the testimonial of the kids in that world. The second one was a film I had seen a bunch of times as I would also recommend the Metal: Evolution series as well though I really didn't like the one on grunge since it tend to praise the efforts of those awful post-grunge bands like Crud and Nickelturd.