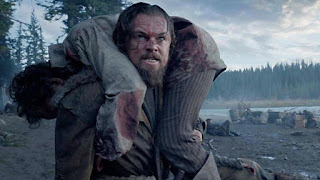 Based on the novel The Revenant: A Novel of Revenge by Michael Punke, The Revenant is the real-life story of American frontiersman Hugh Glass who was buried alive following an attack by a bear as he goes after those who had left him for dead. Directed by Alejandro Gonzalez Inarritu and screenplay by Inarritu and Mark L. Smith, the film is an exploration of survival and vengeance set in 1823 South Dakota and Montana with Leonardo diCaprio playing the role of Glass. Also starring Tom Hardy, Domhnall Gleeson, Forrest Goodluck, Will Poulter, Brendan Fletcher, and Lukas Haas. The Revenant is a chilling and visceral film from Alejandro Gonzalez Inarritu.

It’s 1823 in the Rocky Mountains where a group of men are collecting fur and pelts while evading the Arikara tribe who has been pursuing them. The film revolves around Hugh Glass’ expedition in that world with his son where he is attacked by a grizzly bear and later left for dead by his men where he goes on a quest for vengeance. While it is a simple story about vengeance and survival during a harsh winter, it is a film that plays into Hugh Glass coping with loss as well as trying to do what is right where he is trying to survive near-death experiences and evade this tribe that is trying to find a chief’s daughter who had been kidnapped. The film’s screenplay by Alejandro Gonzalez Inarritu and Mark L. Smith does follow a simple structure in terms of its narrative which play into Glass and Captain Andrew Henry (Domhnall Gleeson) trying to survive the attack and then the former’s attack from a grizzly bear where he is left to dead by the trapper John Fitzgerald (Tom Hardy).

The narrative is very straightforward yet it is more of a minimalist script that doesn’t rely much on plot but rather character motivations and what Glass is trying to do to survive. Even as he reflects on his own past and his reasons to live as he was accompanied by his son Hawk (Forrest Goodluck) on this hunting expedition. After the attack from the bear and being cared for by Hawk and a young trapper in Bridger (Will Poulter), Glass’ life hangs on the balance where Fitzgerald would make some decisions as he is a man driven by greed and thinking only for himself. For Glass who would be left for dead and buried alive, the actions of Fitzgerald would only make him determined for revenge but has to endure something more treacherous which is the cold and bruising weather, his damaged body, and the Arikara tribe who spare no one.

Inarritu’s direction is definitely sprawling in terms of not just the visual palette he creates but also in the atmosphere that is set which adds to the film’s very dreary tone. Shot largely on location in mountain and forest locations in Alberta and British Columbia provinces in Canada as well as some of it in Argentina, the film has this sense of physicality in what Inarritu is going for. The forest and the mountains are definitely characters in the film as it play into what Glass and the men in the film are trying to do in this terrible conditions of not snow but also winds and blizzards in the mountains. Inarritu’s usage of wide and medium shots would bring so much to the location as well as what these men have to do to get in this fort and be safe despite another presence from the Arikara tribe who will kill everyone including a group of Native Americans living outside of the fort. It adds to the tense tone of the film as well as elements of surrealism as it relates to Glass’ past and the sense of longing and loss that looms over him.

Inarritu would create something that is a bit dream-like but also moments that are filled with dazzling visual imagery in some of the intense action scenes along with some close-ups that play into the suspense and drama. Inarritu would also create this idea about death as it play into Glass’ own sense of grief and loss as it includes a flashback of him looking into this small hill filled with skulls. It adds to Glass’ determination to go after Fitzgerald where the two would have this climax where it’s not just a battle of wits but also a battle of will with the cold mountains and harsh weather conditions being their surroundings. Overall, Inarritu crafts a very gripping and evocative film about a man’s determination for revenge and survival in the Rocky Mountains.

Cinematographer Emmuanel Lubezki does incredible work with the film‘s cinematography with its naturalistic yet intoxicating approach to much of the lighting for many of the scenes set in day and night with the latter using natural lighting things such as fire and lamps as it is a major highlight of the film. Editor Stephen Mirrione does brilliant work with the editing in creating some unique jump-cuts and other stylish cuts to play into the film‘s offbeat rhythms as well as using fade-outs to structure the story. Production designer Jack Fisk, with art directors Laurel Bergman, Michael Diner, and Isabelle Guay and set decorator Hamish Purdy, does amazing work with the design of the ferry boats, the fort, and some of the smaller things that are created in the forest including the little tents that Glass would make in his journey.

Sound designers Lon Bender, Martin Hernandez, and Randy Thom, along with sound editor Victor J. Hernandez, do sensational work with the sound from the way the wind sounded as it creates a sense of unease in the locations as well as the sounds of arrows, gunfire, and all sorts of naturalistic sounds that is captured throughout the film. The film’s music by Ryuichi Sakamoto, Alva Noto, and Bryce Dessner is superb for its mixture of discordant string arrangements and bombastic percussions with an air of ambient textures while music supervisor Lynn Fainchtein would provide some traditional music pieces that were played during those times.

The casting by Francine Maisler is phenomenal as it feature some notable small roles and appearances from Lukas Haas, Brendan Fletcher, Paul Anderson, and Kristoffer Jones as fellow trappers and soldiers who work under Captain Henry in hunting pelt while Fabrice Adde is terrific in a small role as head French trapper team named Toussaint. Other noteworthy small roles include Grace Dove as Glass’ late wife, Melaw Nakehk’o as the captured daughter of the Arikara chief, Arthur Redcloud as a Pawnee Indian Glass meets during his journey who would heal him, and Duane Howard as the Arikara chief Elk Dog who leads his tribe to find his daughter and kill whoever stands in his way. Forrest Goodluck is fantastic as Glass’ son Hawk as a young man who aids his father as he copes with Fitzgerald’s insults as well as the situation his father is in. Will Poulter is excellent as Bridger as a young trapper who deals with the severity of Glass’ situation where he tries to help him while understanding what Fitzgerald is doing and what kind of person he is.

Domhnall Gleeson is brilliant as Captain Andrew Henry as a military leader who is the leader of the expedition as he is someone that trusts Glass as he does whatever he can to help him while wondering about what Fitzgerald is about. Tom Hardy is incredible as John Fitzgerald as a trapper who is a man that is in it for himself and make a lot of money while seeing that carrying the injured Glass is a waste as he decides to leave him for dead without any remorse. Finally, there’s Leonardo diCaprio in a tremendous performance as Hugh Glass as this frontiersman that tries to survive as he gets attacked by a bear and then left for dead where it’s a performance from diCaprio that is astonishing in terms of how little he speaks and how determined he is to survive as the physicality of what he does is just eerie to watch in what is one of his finest performances to date.

The Revenant is a spectacular film from Alejandro Gonzalez Inarritu that features great performances from Leonardo diCaprio and Tom Hardy. Along with a strong supporting cast, dazzling visuals, high-octane sound, a thrilling soundtrack, and a harrowing story of death, survival, and vengeance. It’s a film that manages to be engrossing in its locations as well as what is going on during a time where hunting was natural and survival was key to living. In the end, The Revenant is a magnificent film from Alejandro Gonzalez Inarritu.

I'm glad you talked about Gleeson. He and Poulter get kind of left out of the acting conversation because of how strong DiCaprio and Hadry were, but they were both great, IMO. Great review!

Can't wait until I get to see this. If I'm lucky, I'll get to do so before the Oscars. Wish me luck.

I should muster up the courage to see this on the big screen. I'm not good w/ gore and graphic violence but I'm really curious about this one given all the great reviews.

@Brittani-I agree as I thought those two really did something for the film as they were able to provide some moral balance as well as be characters that would observe the actions of the lead roles.

@Wendell-See it as soon as possible as I'm sure it's playing at your nearest multiplex.

@ruth-It needs to be seen on the big screen as it is a one of a kind film. It is violent but not as gory as you might think it is though it does feel very real.