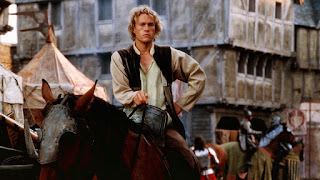 Based on the story The Knight’s Tale by Geoffrey Chaucer, A Knight’s Tale is the story of a squire who decides to become a knight as he becomes a hero to the people while gaining the ire of a tournament champion. Written for the screen and directed by Brian Helgeland, the film plays into a young who comes from nothing and becomes a champion with the help of other peasants as well as those who are from the world of nobility. Starring Heath Ledger, Rufus Sewell, Mark Addy, Shannyn Sossaman, Alan Tudyk, Laura Fraser, Berenice Bejo, James Purefoy, and Paul Bettany as Geoffrey Chaucer. A Knight’s Tale is a gloriously entertaining and engaging film from Brian Helgeland.

The film revolves a young squire who decides to become a knight following the death of his master as he’s aided by a couple of friends in his quest to become a champion despite not being connected to any kind of nobility. With the aid of a broke and naked Geoffrey Chaucer and female blacksmith in Kate (Laura Fraser), William Thatcher (Heath Ledger) would find his way to climb up the ranks as tournament champion while hoping to defeat the great champion Count Adhemar (Rufus Sewell) and win the heart of a noblewoman in Jocelyn (Shannyn Sossaman). While it’s a story that is quite simple, Brian Helgeland creates something that manages to be universal in this young man who was born a peasant squire who does these joust tournaments and becomes a champion of the people.

Helgeland’s script plays into William’s determination to become a knight in the hopes that he can get out of his hardened upbringing and go for something more. Yet, he would share it with his friends as well as intrigue Jocelyn who sees him as someone that is very different from the knights that often court her. To the film’s antagonist in Count Adhemar, he sees William as someone that doesn’t play by the rules nor is someone that behaves a certain way as his jousting style is one that Ademar replies as no style at all. It adds to this conflict of sorts of old world ideals vs. new world ideals as William represents the latter in his pseudonym Sir Ulrich von Lichtenstein of Gelderland.

Helgeland’s direction is filled with not just an air of simplicity in the compositions but also something that is very offbeat in the way he fuses 20th/21st Century ideas into the film such as music and product placement logos. Notably as Helgeland discards the idea of anachronisms in scenes where songs by Queen or David Bowie are played in parties or jousting events as it makes sense in the scenes he creates. Many of the compositions in wide and medium shots play into the many locations set in the film as much of it is shot in the Czech Republic near Prague. Helgeland’s usage of close-ups add to some of the drama as well as the humor including some scenes where William looks back into his life as a child and the dreams that are instilled in him wanting to make his own destiny. Even as it plays into that determination of a man from a poor background giving people from his world hope in becoming champion as well as defying the odds. Overall, Helgeland creates a riveting and exciting film about a poor squire who becomes a champion for the people.

Cinematographer Richard Greatrex does excellent work with the film‘s cinematography with some naturalistic lighting for some of the daytime exterior scenes while creating some unique lighting schemes and moods for scenes set at night. Editor Kevin Stitt does brilliant work with the editing with its stylish usage of jump-cuts, montages, and dissolves to play into some of the action and humor in the film. Production designer Tony Burrough, with set decorators Dominic Smithers and Jiri Zureck and art directors John Hill and Grant Armstrong, does amazing work with the set pieces from the jousting arenas and castle halls as well as the tents in that period of medieval times. Costume designer Caroline Harris does fantastic work with the costumes from the gowns that the noblewomen wear including the dazzling clothes of Jocelyn to the armors and robes the knights wore.

Hair/makeup artist Pebbles does nice work with some of the designs for Jocelyn‘s hairstyle and some of the makeup she would wear. Visual effects supervisor Tim Burke does terrific work with the minimal visual effects that include a few set dressing scenery including one shot of the old London Bridge. Sound editor Jon Johnson does superb work with the sound from the way the spears sound against the armor to the sounds of swords clanging. The film’s music by Carter Burwell is wonderful for its mixture of orchestral flourishes and folk pieces to play into the periods of the time as it is mixed in with late 20th Century music from Queen, David Bowie, War, Thin Lizzy, Rare Earth, Bachman-Turner Overdrive, Sly and the Family Stone, AC/DC, and Eric Clapton.

The casting by Francine Maisler is phenomenal as it features some notable small roles from Steven O’Donnell and Jonathan Slinger as men Chaucer owes money to, Nick Brimble as William’s old master Sir Ector, Leagh Conwell as the young William, Christopher Cazenove as William’s father who encouraged him to go after his dreams, Scott Handy as Adhemar’s assistant, and James Purefoy as the knight Sir Colville whom William befriends. Berenice Bejo is wonderful as Jocelyn’s lady-in-waiting Christiana who would be Jocelyn’s conscience and liaison. Laura Fraser is terrific as William’s blacksmith who would create a new armor for him while showing him how to dance with a woman for a ball. Alan Tudyk is fantastic as William’s friend Wat as this very tempered squire that always throw a fit while hoping to eat again. Mark Addy is excellent as Roland as another of William’s friend who is also a squire as he is also a conscience of sorts for William.

Paul Bettany is brilliant as Geoffrey Chaucer as a writer who becomes William’s herald as well as speak for him before the matches where Bettany also provides humor from the way he’s introduced as he’s walking on the road completely naked. Shannyn Sossaman is amazing as Jocelyn as a noblewoman who copes with her status and being seen as a prize until she meets William and realizes that he just cares about her as an equal as it’s a very delightful performance to watch. Rufus Sewell is incredible as Count Adhemar as jousting champion and nobleman who tries to woo Jocelyn while dealing with William’s presence which he sees as a threat as he’s a fun antagonist to watch. Finally, there’s Heath Ledger in a spectacular performance as William Thatcher as a young peasant squire who dreams of becoming a knight as he seizes the chance to become one while trying to do what is right as well as be humble as it’s one of Ledger’s definitive performances.

I love this film, I used to refer to it as a guilty pleasure, but that gives off the pretense that it's bad when it isn't. It's a good show all the way through and I love the cast. Great review!

Thank you. I love this film. It's so fun to watch. What can anyone not love about this?

I hate when great films like this get unfair criticism because they are seen as teen flicks. This is such a well staged, paced and acted film, and it's boundlessly clever AND entertaining. Great write up!

@Fisti-Thanks. It's one of those films that I can't help but re-watch as it has so much more to offer. I never saw it as a teen flick but a fun adventure film.