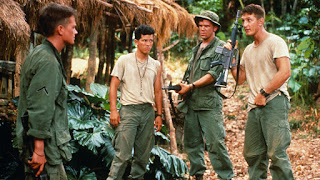 Based on an article for The New Yorker about the real-life Hill 192 incident during the Vietnam War by Daniel Lang, Casualties of War is the story of a young soldier in the Vietnam War who finds himself being forced by his platoon sergeant to take part in raping a young Vietnamese woman. Directed by Brian de Palma and screenplay by David Rabe, the film explores some of the dark aspects of war where a young soldier tries to deal with the immoral events that occur in war including by those he is forced to serve for. Starring Michael J. Fox, Sean Penn, Don Patrick Harvey, John C. Reilly, John Leguizamo, Ving Rhames, and Thuy Thu Le. Casualties of War is a gripping and chilling film from Brian de Palma.

Set during the Vietnam War, the film revolves around a real-life incident in which a platoon kidnaps and rapes a young Vietnamese War during a mission where a young private deals with the circumstances of what is happening. It’s a film that plays into this young private first-class named Eriksson (Michael J. Fox) who questions the actions of his superior and his fellow soldiers. Especially as he gets confronted by Sgt. Tony Meserve (Sean Penn) who orders him to do this while claiming that it’s what they need to do to fuck over the Viet Cong. David Rabe’s screenplay does dramatize the events that happened in real life but also display some interesting development into the characters as men who are fighting this war where boredom and fatigue doesn’t just drive them into madness but also in doing things that are considered immoral. Much of the story is told from Eriksson’s perspective as the film begins and ends in 1974 San Francisco where Eriksson is on a train sleeping where he sees this young Vietnamese-American woman which triggers what he remembered as a soldier.

The first act is about Eriksson being this new soldier who has arrived three weeks earlier where he is saved by Sgt. Meserve during a battle as it is the first encounter of the realities of war as well as the bond between soldiers. The second act is about Sgt. Meserve’s mission to inspect a river boat delivery where he decides to go into a village and kidnap this young woman (Thuy Thu Le) with the aid of Corporal Clark (Don Patrick Harvey), PFC Hatcher (John C. Reilly), and the new soldier in the platoon in PFC Diaz (John Leguizamo). While Cpl. Clark is willing to help Sgt. Meserve in kidnapping and raping this young woman with PFC Hatcher reluctant at first. Eriksson is the one who is against this as is PFC Diaz only to join in. The third act is about its aftermath where Eriksson copes with what happened but also learns that some of his superiors are indifferent to what happened which forces him to deal with the moral implications and the troubling aspects of war.

Brian de Palma’s direction is very gripping for the way it plays into the terror and chaos of war as well as some of the immorality that occurs. Shot largely on location in Thailand, the film does play into a world that is dangerous and unpredictable from Eriksson’s first encounter with seeing one of his own being killed unexpectedly which sets the tone for what is to come. The usage of the wide shots definitely has de Palma capture the tense atmosphere of the jungles as well as using some close-ups and medium shots to play into the drama and eerie moments of suspense. Even in some of the intense moments of Sgt. Meserve raping the young woman with the very reluctant Pfc. Diaz being the first to have sex with her after Sgt. Meserve is done. The usage of crane shots for some of the battle scenes as well as some of the suspenseful moments that play into the events that would horrify Eriksson. The third act is where de Palma really gets to shine such as a monologue delivered by Eriksson’s superior Lt. Reilly (Ving Rhames) who reveals about some of the dark aspects of human nature as it would force Eriksson to realize that the realities of the way things are. Even if attempting to do what is right is pushed aside by politics and indifference in order to keep going in the state of war. Overall, de Palma crafts an engaging yet harrowing film about a real-life incident that involved the rape of a young Vietnamese woman.

Cinematographer Stephen H. Burum does brilliant work with the film‘s cinematography from the look of the exteriors of the jungle and bases at night to the lighting inside the tunnels that the Vietcong uses. Editor Bill Pankow does amazing work with the editing in creating some unique jump-cuts and rhythmic cuts to play into the suspense and drama that occurs throughout the film. Production designer Wolf Kroeger, with art director Bernard Hides and set decorators Peter Hancock and Hugh Scaife, does fantastic work with the building of the army bases as well as the underground tunnels and bars outside of the army bases.

Costume designer Richard Bruno does nice work with the costumes from the look of the uniforms as well as the ragged clothes of the Vietnamese villagers. Sound editor Maurice Schell does superb work with the sound from the sparse sounds of the jungles to the loud mixing of sounds of gunfire and helicopters in the air. The film’s music by Ennio Morricone is phenomenal with its usage of Asian flute music and lush string arrangements to play into the drama and suspense as it is definitely one of the film’s highlights along with a soundtrack featuring music of that period in time.

The casting by Lynn Stalmaster is incredible for the ensemble that is created as it features some notable small roles from Darren E. Burrows as a young soldier Eriksson deals with late in the film, Sherman Howard as a military judge, John Marshall Jones as a military police officer, Sam Robards as an army captain/chaplain, Dan Martin as Eriksson’s friend Hawthorne, Dale Dye as the top officer of the platoon in Captain Hill, Erik King as a veteran soldier who would serve as an early mentor for Eriksson, and Ving Rhames in a superb role as Lt. Reilly as a platoon leader who reveals some harsh truth about war and human nature. Thuy Thu Le is excellent as the young woman Oanh who is captured by Sgt. Meserve and his platoon as a sex slave claiming that she is working for the Vietcong as she becomes humiliated and destroyed by their actions. In his film debut, John C. Reilly is fantastic as PFC Hatcher as the comic-relief of sorts who always talking about drinking beer and having fun while dealing with the chaos as well as being reluctant in taking part of the rape.

John Leguizamo is amazing as PFC Diaz who just joined the platoon as he is very reluctant to take part in the rape only to be coerced into it which displays someone trying to fit in with the platoon. Don Patrick Harvey is brilliant as Cpl. Clark as a sadistic man with a knife who has no qualms in raping and killing Vietnamese women as well as do things that are very questionable. Michael J. Fox is remarkable as PFC Eriksson as this young soldier who deals with the moral implications of his platoon sergeant as he struggles to do the right thing as well as try and save this young woman in an act of anti-war sentiment. Finally, there’s Sean Penn in a terrifying performance as Sgt. Meserve as this platoon leader who is a great soldier but also quite sadistic himself as Penn brings a strange complexity to someone who is a totally dick and ruthless in what he does yet is the kind of person any soldier would want to have by their side.

Casualties of War is a marvelous film from Brian de Palma that features tremendous performances from Sean Penn and Michael J. Fox. Along with Ennio Morricone’s fantastic score, early breakthrough performances from John C. Reilly and John Leguizamo, and strong anti-war themes. It’s a film that doesn’t play by the rules of war as it showcases some of the dark aspects of humanity in war. In the end, Casualties of War is a sensational film from Brian de Palma.

To be honest, I purposely skipped this way back when it came out. I saw it was MJ Fox and Sean Penn in a war movie and immediately thought that was the worst idea ever. This looked nothing like other Fox movies and at that time I only knew Penn as Spicoli from Fast Times at Ridgemont High, so he seemed an ill-fit for such a movie, too. I admit I was young and dumb. Kinda forgot about it until this review. That was my long-winded way of saying I haven't seen this, yet.

There are sooo many pieces that this movie that intrigue me (cast, composer, director) yet I have still never seen it. I MUST fix this!

@Wendell-It's a film where the idea of Marty and Spicoli in a Vietnam War film may look dumb but take them out of their comfort zones and you do find something that is just riveting. It shows that Fox is quite underrated as a dramatic actor and I don't think he's ever stretched like that as an actor before or since. Still, it's a glimpse of what more he could do but I'm sure he's content with what he's done.

@keith71_98-For me, this is one of de Palma's most underrated films as it wasn't seen by a lot of people I think because there was so much about Vietnam that had been told. Yet, de Palma shows that there is more to say while creating something that does stand out from other films about Vietnam.

I remember when I first saws this I thought that Penn's performance was way over the top and felt out of place with the rest of the film. It's been years since I've seen this one and I really need to revisit it. I do remember Michael J. Fox being quite good in this. I also thought he was excellent in BRIGHT LIGHTS, BIG CITY.

@J.D. Lafrance-It's a film that has managed to improve over time as I think it was a little shocking when it came out at first but now it's seen as a very overlooked film. Especially for those performances. Plus, I get a kick out of John Leguizamo's story about being in the film and working with Penn and de Palma as he talked about being slapped constantly by Penn and de Palma telling Penn "Sean, slap the shit out of him".