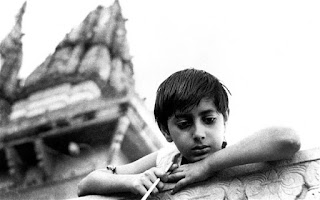 Based on the novels of Bibhutibhushan Bandopadhahyay, Aparajito (The Unvanquished) is the story of a young boy who comes of age as he copes with loss as well as growing up where he goes to the big city with big dreams to become a writer. Written for the screen and directed by Satyajit Ray, the film is the second part of a trilogy of films that relates to the life and growth of Apu Roy as he copes with living in a new village and the modern world as he is played by Pinaki Sen Gupta and Smaran Ghosal in their respective personas as a boy and as a young man. Also starring Kanu Banerjee, Karuna Banerjee, Ramani Ranjan Sen, Charuprakash Ghosh, and Subodh Ganguli. Aparajito is a riveting yet enchanting film from Satyajit Ray.

The film would revolve Apu coming of age as he adjusts to his new surroundings where he encounter not just some life changes but also going into different places where he tries to find himself. It’s a film that plays into the life of a boy where he becomes a man and tries to take advantages of the opportunities he is given. Yet, he is torn in his devotion to make something of himself and be there for his mother (Karuna Banerjee) who is still reeling from loss and loneliness. Satyajit Ray’s script is plot-driven as it plays into Apu’s evolution as a boy and as a young man as the first half is about Apu as a boy adjusting to his new living environment in Varanasi near the Ganges River and then moving to the more rural Mansapota village. The second half has Apu becoming a young man where his growth in his formal education gives him the chance to go to Calcutta to study science despite his mother’s plea to become a priest like his father (Kanu Banerjee). Still, Apu has to endure not just being away from the environment he knew but also would learn to grow up in order to survive in the city.

Ray’s direction is very intoxicating to watch in the way he shoots the different areas in India as it is clear that it is a bigger film with visuals that recalls elements of what was happening in European cinema. Much of it involve some gorgeous wide shots of scenes set in Varanasi near the Ganges River as well as shots of the sky with birds flying in the air for the film’s first act. The usage of medium shots and close-ups would play up the intimacy of the world of Varanasi where Apu and his parents live in an apartment where they had to share with other lodgers. At times, it feels a little cramped but Ray plays off this feeling of a family still trying to find their footing but events would change things forcing Apu and his family to live at the home of Sarabajaya’s uncle Bhabataran (Ramani Ranjan Sen) and eventually move to the rural village of Mansapota.

The look of the scenes in Mansapota are more intimate with its close-ups and medium shots where it plays a world that is sort of cut-off from modern society while it also has something that attracts Apu as an individual. Most notably the idea of going to school and learn something where it is clear that he is a gifted student that has so much to offer than being a priest. By the time the film is set in Calcutta, it is this very modern world where Apu is confused but also homesick as it his this very first full-on encounter with the modern world as it’s really cramped but also has some wide scenery where Apu looks at the River Ganges again. Its ending isn’t just another end to a phase in Apu’s life but also the end of Apu as a child and him becoming a man whose roots he has to break away from. Overall, Ray crafts a very evocative yet rapturous tale of a boy becoming a man.

Cinematographer Subrata Mitra does brilliant work with the film‘s black-and-white photography from the beauty of the exteriors set in the River Ganges that has this pristine yet naturalistic look to some of the scenes set at night that features some unique lighting with its usage of candles and oil lamps. Editor Dulal Dutta does excellent work with the editing in utilizing some stylish dissolves and rhythmic cuts to play into the drama as well as a few montages that play into Apu‘s progress as a student. Art director Bansi Chandragupta does fantastic work with the look of the village home in Mansapota as well as the interiors of the homes Apu would live in during his time in Calcutta and at Varanasi.

Sound recordist Durgadas Mitra does superb work with the sound in capturing many of the atmospheric moments in the Mansapota village to the raucous sounds that happens in Calcutta and Varanasi. The film’s music by Ravi Shankar is amazing for its traditionally-based Indian music filled with ferocious sitar playing and string arrangements along with layers of percussion instruments that play into key moments of the drama along with more somber pieces in the quieter moments.

The film’s phenomenal cast includes notable small roles from K.S. Pandey, Meenaski Devi, and Chadruprakash Ghosh as fellow neighbors in the apartment building, Moni Srimani as a school inspector who is impressed with the young Apu’s reading, Hermanta Chatterjee and Anil Mukherjee as a couple of Apu’s Calcutta schoolteachers, Kalicharan Roy as Apu’s boss at a printing press, and Subodh Ganguli in a superb performance as Apu’s headmaster at the Mansapota village school who sees the potential in the young Apu. Ramani Ranjan Sen is fantastic as Sarbarjaya’s uncle Bhabataran who would help Apu and his family find a home after a life-changing event in Varsani.

Kanu Banerjee is excellent as Apu’s father Harihar who returns to his job as a priest as he also tries to keep spirits high while coping with the demands of his job. Karuna Banerjee is amazing as Sarbarjaya as Apu’s mother who doesn’t just deal with the new living situations but also loss and loneliness where she and Apu bond during their time in the village despite the fact that she couldn’t bear the idea of him leaving to Calcutta. Finally, there’s Pinaki Sen Gupta and Smaran Ghosal in remarkable performances in their respective roles as the young and teenage Apu with Gupta providing a sense of energy to his role as the 10-year old Apu who deals with not just loss but also big changes while Ghosal brings a determination but also a sadness as the teenage Apu who is torn with being with his mother and broadening himself to become a man.

I've never heard of this one, or the novels that they're based off of. It sounds like an interesting little film. Great write up!

UGH! I need to see this! This has been on my 'must watch list' for months now...I need it! Great review.

@Brittani-Thanks. I recorded this and the other 2 films last November when TCM premiered them as a whole. I just finished watching the last film of the trilogy as the entire series is a must.

@Fisti-It was on TCM last November. Get the DVD/Blu-Rays now or, wait till the next Criterion flash sale. I'm glad I was able to record those films because I've been waiting for these films to be seen in its restored edition as they were my first choice as a Blind Spot for this year.

I've heard nothing but good things about the Apu Trilogy, but I haven't seen any of them. Maybe a future Blind Spot film for me.

@Wendell-Well, if you have some extra cash to spare and a credit card. I'd suggest you wait for the next Criterion flash sale to get the entire box set or in July at Barnes & Nobles where it will be half-price. That's what I'm going to do as I hope to do more Ray in the coming months.