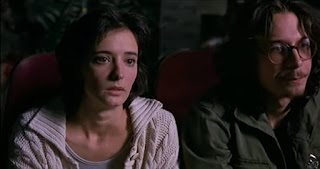 Directed and scored by Alejandro Amenabar and written by Amenabar and Mateo Gil, Tesis (Thesis) is the story of a student who is writing a thesis on violence as her research leads her into a murder mystery involving snuff films. The film is a thriller that plays into one’s fascination with death as well as the culture of snuff films. Starring Ana Torrent, Fele Martinez, Eduardo Noriega, Xabier Elorriaga, and Miguel Picazo. Tesis is a provocative yet entrancing film from Alejandro Amenabar.

The film revolves around a college student who is trying to work on a thesis on audio/visual violence and humanity’s fascination with it as she becomes engrossed in the culture of snuff films following the death of her professor where she is aided by a film student who believes something is up about these films. It is a suspense-thriller that revolves around the culture of snuff films as a young woman deals with not just these mysterious deaths of these women but also who are involved with filming and keeping them secret. The film’s screenplay by Alejandro Amenabar and Mateo Gil doesn’t just explore a woman’s fascination with violence despite her disdain for it but also this subculture where violent acts and deaths are being filmed for the pleasure of some. While the protagonist Angela (Ana Torrent) is interested in watching these films for her thesis as her professor recommends one of his students in Chema (Fele Martinez) to show some films to her.

Once her film professor in Figueroa (Miguel Picazo) dies mysteriously after supposedly watching one of these snuff films, Chema would watch it himself as he would make some big discoveries about not just some of the details but also the kind of cameras that were used. While there are suspects such as a former classmate of Chema in Bosco (Eduardo Noriega), Angela finds herself attracted to Bosco which confuses her while she is also confronted by her new professor Castro (Xabier Elorriaga) about the motivation of her thesis. Especially as Castro is someone that is telling his students about the idea of giving in towards commercialism instead of individual artistic pursuits to help the film industry in Spain. It adds to this conflict of sort that is happening throughout the story about what these snuff filmmakers want to provide but also to see if the public at large would want to see this in this twisted form of voyeurism.

Amenabar’s direction definitely plays with the conventions of suspense and drama while adding bits of humor into the film. Shot largely in Madrid at the Universidad Complutense de Madrid, the film does have an intimacy into some of the compositions where some of it features medium shots as well as a few wide shots to capture the space of the classrooms. Amenabar also creates some unique compositions from the scene where Angela and Chema first look at each other as they’re both listening to different music as it showcases how different they are. Yet, their interest in film is what brings them together though Chema is someone who is more of a guy that loves horror and gratuitous violence. The usage of video cameras and the look of the snuff films definitely add something that is quite gruesome as Amenabar plays off into the element of suspense as it includes a chase scene but also moments that blur the lines of reality and fiction. Even in scenes that play into a sense of terror such as the scene where Angela and Chema go into the school library and find this secret room.

Amenabar’s score would help play into the suspense and drama such as his piano-based themes that would be featured prominently in the chase scenes while he would create some low-key orchestral moments for the drama including the film’s climax. Especially as it features many twists and turns into who has been killing these women and is there more than just one killer where Angela is caught in the middle as she plays the Final Girl persona that is so prevalent in horror/suspense films. Yet, she is key into not just solving this mystery but also cope with the aftermath as it relates to her thesis and what she had been intending to say. Overall, Amenabar creates a thrilling yet captivating film about a woman’s study on violence and her introduction into the world of snuff films.

Cinematographer Hans Burman does brilliant work with the film‘s cinematography from the usage of lights for many of the interior scenes such as the boiler room and hallways where the secret tapes are at as well as some of the scenes set at night and the grainy look of the digital video that was used for the snuff films. Editor Maria Elena Sainz de Rozas does amazing work with the editing with its usage of fade-outs and jump-cuts for some of the suspenseful and dramatic moments as well as creating some offbeat cuts in some of the snuff films. Production designer Wolfgang Burmann does excellent work with the look of Chema‘s apartment home that is filled with horror posters and all sorts macabre imagery as well as the look of the secret place where the snuff films are hidden.

Costume designer Ana Cuerda does nice work with the costumes from the casual look of Angela to the more grungy look of Chema and the more refined look of Bosco. The sound work of Ricardo Steinberg is superb for the sound work that is created in some of the snuff films as well as scenes that play up into the suspenseful moments of the film.

The film’s fantastic cast include some notable small roles from Teresa Castanedo as a news broadcaster, Olga Margallo as the young woman shown in the snuff film, Paco Hernandez and Rosa Avila as Angela’s parents, Miguel Picazo as Angela’s old professor Figueroa, Nieves Herranz as Angela’s younger sister Sena, and Rosa Campillo in a wonderful performance as Bosco’s girlfriend Yolanda who reveals to Angela about the workshop that was part of the snuff films. Xabier Elorriaga is excellent as Professor Castro as the new head of the film department who tells his student to make films and give the audience what they want while being very suspicious about what Angela is wanting to say in her thesis.

Eduardo Noriega is brilliant as Bosco as this very good-looking student who is quite creepy as it plays into his own intentions but also someone who knows about what goes on in these workshops. Fele Martinez is amazing as Chema as a horror/action film buff with a love for violence who makes some key discoveries into the snuff films while being somewhat antagonistic towards Angela in her lack of knowledge on film violence. Finally, there’s Ana Torrent in a remarkable performance as Angela as this college student trying to finish a thesis on audio/visual violence as she finds a snuff film that her professor watched where she finds herself entangled in a murder mystery where it’s a performance that has Torrent display a restraint but also a unique interpretation of the Final Girl persona.

This movie sounds insane, but in a good way. I don't think I've ever heard of it before, but I am certainly interested in it now.

It's not an easy film to find so you'll have to pirate the film through torrents which I was able to do. It is a very smart thriller that is conventional but it plays with those conventions.

Sounds really interesting and intense, thanks for sharing!

@jwforeva-You're welcome. Hope you get a chance to see it.

Completely new to me. Thanks for writing about it. It sounds intriguing.

@keith71_98-Well, it's a 20-year old film that I'm sure for anyone outside of Spain or the rest of Europe would know. In America, it is quite obscure so you'll have to look through torrents as I totally recommend this for anyone that is into smart thrillers.