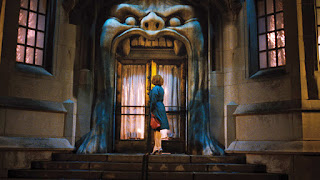 Written and directed by Ryan Gosling, Lost River is the story of a single mother who tries to save her home by taking a mysterious job while her son would try to help where he learns about a mysterious underwater city. The film is a mixture of fantasy with elements of film noir that plays into a world that doesn’t make sense as many characters deal with this strange world they’re in. Starring Christina Hendricks, Saoirse Ronan, Ben Mendelsohn, Iain De Caestecker, Matt Smith, Barbara Steele, and Eva Mendes. Lost River is an evocative yet rapturous film from Ryan Gosling.

Set in Detroit, the film revolves around a single mother trying to raise her two sons as one of them is a teenager and the other is an infant where she takes a mysterious job to save her home while the teenage son deals with a local gangster as he tries to find ways to help his mother. It’s a film that does have a simple story but it also has these elements of surrealism as well as the idea of innocence lost. Even as this small town Billy (Christina Hendricks) is living with her sons Bones (Iain De Caestecker) and the infant Franky (Landyn Stewart) is a place that is just in ruins while it’s nearby this reservoir that is covering a city that used to be there. Ryan Gosling’s script doesn’t just play into this idea of survival but what Billy and Bones have to do as the former has to work for a bank manager who also moonlights as the manager of a strange vaudeville club that emphasizes a lot on macabre imagery.

In the latter, he befriends his neighbor Rat (Saoirse Ronan) who tells him about this mysterious underwater city that used to be there as she believes that this little town could be saved if someone retrieve a piece of the city underwater. Though Bones doesn’t believe that, he still has to deal with the fact that his encounter with the local gangster Bully (Matt Smith) has him become a target where he has to hide as what he does to his enemies are quite gruesome. Even as Rat becomes targeted where Bones realizes what he has to do as does Billy who realizes where the real money is made at this club she is working for. All of which play into a world that has become corrupt and repressive where a mother and son are forced to take action.

Gosling’s direction is definitely very stylized in not just its imagery but also in mood where it a film that feels very dream-like yet rooted in reality. Shot on location in Detroit and areas nearby, the film has this strange mixture of the harsh realities of urban life with its empty and ruined houses that is joined with a world that is very surreal as it relates to the reservoir that Bones encounters and the club that Billy would work at. Gosling’s approach to compositions in his usage of wide and medium shots not only capture a world that is very unique but also one that has a sense of beauty despite its sense of decay. The way he would film certain images or create scenes that play into that mix of ugliness and beauty showcase Gosling’s gift to find that delicate balance as it relates to some scenes between Bones and Rat. The elements of surrealism that is in this club where women pretend to be killed for everyone’s pleasure is quite offbeat in its humor yet it also has something that is dream-like.

Even with Gosling’s approach to close-ups as well as these scenes that are quite strange and comical as it adds to a world that doesn’t make sense for its lead characters. The element of dream-like images mixed in with these strange and harsh surroundings would add to the film’s climax which is quite emotional where both Billy and Bones would make a decision as it relates to the reality they live in. A reality that both know they have to face where it’s no longer about a house they’re trying to save but really themselves and Franky. Overall, Gosling creates a ravishing yet eerie film about a mother and son trying to survive in a decaying environment filled with strange secrets.

Cinematographer Benoit Debie does phenomenal work with the film‘s cinematography with its usage of naturalistic and dream-like images for scenes set in the day along with some of the interiors with its stylish usage of neon lights including some of the scenes set at the club where Billy would work at. Editors Nico Leunen and Valdis Oskarsdottir do excellent work with the editing as they use some stylish jump-cuts to play into some of the drama and action along with some of the offbeat moments in the film where much of the editing is stylized yet adds a lot to what is shown. Production designer Beth Mickle, with set decorator Lisa K. Sessions and art director Erick Donaldson, does amazing work with the look of the club that Billy would work including the secret room as well as the room and home where Rat lives in.

Costume designer Erin Benach does fantastic work with the costumes from the lavish clothes of the women at the club to the look of Bully. Special makeup effects artist Michael Fontaine and prosthetics designer Michael Marino do brilliant work with the look of the macabre, gory makeup Billy and several other women would sport into their stage performances at the club as well as the look of Bully‘s henchman. Visual effects supervisor Janelle Croshaw does nice work with some of the minimal visual effects in the macabre performances at the club as well as a few set-dressing scenes such as the old pathway to an old town that is now underwater.

Sound designer Lon Bender does a superb job with the sound to play into the world of the clubs and some of the locations as well as some of the eerie moments at the home base of Bully. The film’s music by Johnny Jewel is great as it is this mixture of electronic music and ambient to play into some of the drama and surreal moments in the film while music supervisor Richard Walters provides a soundtrack that features some of Jewel’s original music from his Italians Do It Better label from acts like the Chromatics, Desire, Symmetry, Glass Candy, and other songs sung by Saoirse Ronan and Ben Mendelsohn as well as a standard called Deep Purple.

The casting by Kathy Mooney and Jennifer Venditti is wonderful as it features some notable small roles from Torrey Wigfield as Bully’s henchman Face, Rob Zabrecky as the club’s MC, Landyn Stewart as Billy’s infant son Franky, Reda Kateb as a kind cab driver who would drive Billy to the club, and Eva Mendes in a superb performance as the club performer Cat who would show Billy the ropes to performing and working at the club including the room where the real money is made. Barbara Steele is terrific in a largely silent role as Rat’s catatonic grandmother who watches old movies based on happier days. Matt Smith is fantastic as the local gangster Bully as a man who instills fear in everyone while being horrific in the way he handles people as it’s a role full of charm and energy. Ben Mendelsohn is excellent as Dave as a bank manager who also moonlights as a club owner where he offers Billy a chance to keep her house but also do things that are very intense.

Saoirse Ronan is brilliant as Rat as this young girl who is a neighbor of Bones as she befriends him while telling him the legend about this underwater city as it’s a performance full of restraint but also charm. Iain De Caestecker is amazing as Bones as a teenager who spends his time stripping down houses where his encounter with Bully nearly gets him in trouble until he encounters what could be the lost city as he realizes it might be the key to get him out of this small town. Finally, there’s Christina Hendricks in a remarkable performance as Billy as this single mother that is trying to save her home from debt where she goes into a world that is very strange only to realize that she is entering a world that is just very dark and complicated.

This movie was so weird. I wish Gosling wouldn't have tried so hard to be Nicholas Widing Refn. I also hated Bully's character, but I loved Ronan and De Caestecker, they're always amazing.

I'm kind of a sucker for weird films as I wasn't sure what I was getting into as I wanted to take a chance. Yet, I ended up enjoying it. It's Refn that I'm sure Gosling was inspired by as I also some of Gaspar Noe, early Harmony Korine, and some David Lynch as it was much better than I thought it would be. I know it's not for everyone as I don't think Gosling is interested in being a mainstream filmmaker but someone that is just trying to find his own language.

I heard this one was booed at Cannes? I knew it wasn't a hit w/ critics either, but I might give it a shot at some point as I like the cast, esp Ronan and De Caestecker. Interesting casting overall too, even w/ Matt Smith who hadn't done many film work in the states at that point.

@ruth-Yeah, this got booed at Cannes. Then again, a lot of good films got booed at the festival. It is a strange film and certainly not very mainstream as I'm surprised that Warner Brothers chose to distribute it to begin with. Yet, it has a lot to offer even if it doesn't work for all audiences as I think it's worth giving a shot.