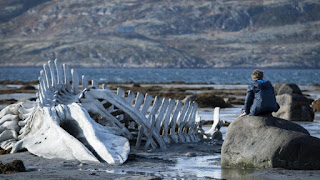 Directed by Andrey Zvyagintsev and written by Zvyagintsev and Oleg Negin, Leviathan is the story about a series of tragic events that relates to a family living in a Russian coastal town as it relates to their mayor. The film is a modern-tale take on the Book of Job where a man struggles to fight for his home only to deal with harsh realities in his surroundings. Starring Aleksei Serebryakov, Elena Lyadova, Vladimir Vdovichenkov, and Roman Madyanov. Leviathan is a mesmerizing and unflinching film from Andrey Zvyagintsev.

Set in a fictional coastal town in Russia, the film revolves around a man who is fighting to save his home as he deals with a corrupt mayor who wants to tear it down for his own reasons. With the aid of an attorney, it seems like Kolya (Aleksei Serbryakov) would get the chance to save his home but a series of unfortunate and tragic events wouldn’t just have him deal with loss but also raise questions about the ways of the world. It’s a film that doesn’t just explore a man trying to save his home but also what he would lose by means that are unexplainable as well as realities as it relates to how corrupt power can be in the hands of a greedy mayor. The film’s screenplay by Andrey Zvyagintsev and Oleg Negin doesn’t just explore the plight of Kolya as this everyman but also a world that is complicated where a politician tries to instill his own power by any means.

The film also explores a growing disconnect into the world of faith and reality as it relates to what Kolya would endure as he would meet those who are part of the Orthodox Church as he would encounter a local priest who tells him about the story of Job. Kolya, drunk and disillusioned, listens but raises a lot about man’s plight and everything he endures as it is this key scene during its third act where Kolya knows what he is losing. It is a moment that says a lot about the church and how they’re connected to Russia’s government, under the rule of Vladimir Putin, which is known for being very corrupt. Though the story that Zvyagintsev and Negin is telling isn’t about politics but how power can destroy things. Yet, Kolya’s own fall is really driven by other things in his own home that he lives with his second wife Lilya (Elena Lyadova) and teenage son Roma (Sergey Pokhodaev) where it is done by things that are unstoppable as it include those who are there to help him but are undone by actions that can’t be explained.

Zvyagintsev’s direction is actually quite simple due to the presentation he creates as he does shoot the film in various locations near Murmansk on the Kola Peninsula in towns such as Kirovsk, Monchegorsk, Olenegorsk, and exterior locations in Teriberka on the sea coast of Barents. The direction has this very entrancing look in the way it captures the vastness of this small coastal town that seems like a close-knit community that is sort of on the fringes from the more well-known cities of Russia such as Moscow. The usage of the wide and medium shots capture the mountains and cliffs in the locations as it would also serve as a key plot-point where Kolya’s life would start to crash during a picnic with family and friends. The approach to drama is quite restrained where it plays into a lot of what is at stake as well as Kolya trying to keep his family together. Even as there’s scenes where many of the characters drink though Zvyagintsev isn’t trying to show these people as drunks but rather real people though there is a scene where Kolya is confronted by the mayor Vadim (Roman Madyanov) where both men are drunk as it is few instances of humor that isn’t shown very often in the film.

Zvyaginetsev also creates elements of ambiguity as it relates to not just what Kolya faces but also as it relates to the people in his life including Lilya and his friend Dima (Vladimir Vdovichenkov) as the latter is an attorney who can do wonders. As good as a friend as Dima is, he would unfortunately play a part into Kolya’s downfall where he would also see the full force of the Vadim’s corrupt rule. The direction becomes more eerie despite its simplicity in its compositions yet it would end with a major reveal of what Vadim wanted to do. Adding to that is a moment where it plays into not just the concept of truth but also the growing disconnect as it relates to church and state being one and the everyday people feeling like they don’t really matter. Overall, Zvyaginetsev creates a provocative yet mesmerizing film about a simple man trying to save his home and deal with loss in a corrupt world.

Cinematographer Mikhail Krichman does excellent work with the film‘s cinematography where it doesn‘t feature a lot of colors in its visual scale to play into the cold environment of the locations but it does have an air of beauty into many of the daytime exteriors in how natural it looks along with some unique lighting for scenes set at night. Editor Anna Mass does terrific work with the editing as it is largely straightforward with bits of style to play into the drama as well as its sense of restraint. Production designer Andrey Ponkratov and set decorator Nikolai Ryabtsev do brilliant work with the look of Kolya‘s home as it feels like something that is homemade but also with a sense of tradition which is in sharp contrast to Vadim‘s office that features a portrait of Vladimir Putin.

Costume designer Anna Bartuli does fantastic work with the costumes as it is largely casual for many of the characters with the exception of Dima and Vadim as they wore these expensive suits. Visual effects supervisor Dmitry Tokoyakov does nice work with some of the minimal visual effects as it is merely bits of set dressing including the film‘s ending. The sound work of Andrey Gergachev is superb for the way it captures many of the things that occur on location as well as the sounds of vodka bottles being guzzled up and things that play into the drama. The film’s music by Andrey Dergachev and Philip Glass is wonderful as it is only played in the final credits as it is just an orchestral piece that mixes elements of traditional Russian music that says a lot in what had happened in the film.

The casting by Elina Ternyaeva is great as it features some notable small roles from Sergei Bachursky as a friend of Kolya in Ivan, Aleksey Rozin as Kolya’s policeman friend Pasha who tries to help Kolya out without getting into trouble, and Anna Ukolova as longtime family friend Angela who tries to deal with the chaos in Kolya’s life as well as ponder what is really going on in the film’s third act. Sergey Pokhodaev is superb as Kolya’s teenage son Roma as a young kid who doesn’t like his stepmother very much as he would see something that would change everything as he has a hard time coping with his father’s downfall. Roman Madyanov is excellent as the town’s mayor Vadim as this fat and greedy politician who wants to destroy Kolya’s home for something he wants to build as he is this true representation of all of the ills that plague the Russian government.

Vladimir Vdovichenkov is brilliant as Kolya’s friend/lawyer Dima who knowledge of the law would prove to be helpful to Kolya but it would be another act that wouldn’t just play into his own undoing but also Kolya’s. Elena Lyadova is amazing as Kolya’s wife Lilya as a woman who tries to do everything she can to help her husband but would also play a part into her family’s downturn as she tries to cope with her actions. Finally, there’s Aleksei Serebryakov in an incredible performance as Kolya as this simple man who is trying to save his home from being destroyed as he would endure suffering of the worst kind as he copes with not just loss but also the realities that he faces in a cruel world.

Leviathan is a phenomenal film from Andrey Zvyagintsev. Featuring a great cast, intoxicating images, and a compelling discussion about the ways of the world set in a modern take on the book of Job. It’s a film that is about not just some of the cruelties of the world but also a look into modern Russia under the leadership of Vladimir Putin. In the end, Leviathan is a tremendous film from Andrey Zvyagintsev.

It's a great film, and you really get the sense while watching it that you need to pay attention because there's so much more going on.

I must've missed the bit about this being a modern-tale take on the Book of Job. Now I'm even more curious about it!

@assholeswatchingmovies.com-I thought it was going to be a little tough to watch as with most Russian films that I know of but this was very different and I became very engrossed by what is happening as it was a big surprise for me.

@ruth-There's a lot of references to that story in the film as it also says a lot more about what is going on in Russia and how that whole idea of church/state being one thing and really telling lies to its people.