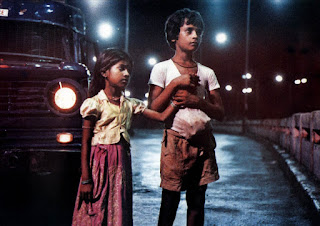 Directed by Mira Nair and screenplay by Sooni Taraporevala from a story by Nair and Taraporevala, Salaam Bombay! (Greetings Bombay!) is the story of the day-to-day life of children living in streets of Mumbai as they struggle to survive. The film explores the world of Mumbai in the 1980s which was filled with the seedy world of crime where children try to live with a sense of goodness in a very dark world. Starring Shafiq Syed, Hansa Vithal, Chanda Sharma, Raghuvir Yadav, Anita Kanwar, Nana Patekar, and Irrfan Khan. Salaam Bombay is a majestic yet gripping film from Mira Nair.

Set almost entirely in the city of Mumbai (then called Bombay), the film revolves around a young boy who had been left behind by a traveling circus where he stays in the city trying to raise money so he can return to his home village and pay back his older brother for a bicycle he burned. There, he struggles to work by giving tea to people in his crowded neighborhood in the streets while befriending a drug dealer and a young girl who is forced to become a prostitute. It all plays into that sense of survival in a world that is quite unforgiving yet Krishna/Chaipau (Shafiq Syed) does whatever he can no matter how hard things are. Even as he is eager to reach his goal and do what is right, despite the fact that his older brother is abusive to him, in a world that is very troubled.

Sooni Taraporevala’s screenplay isn’t just about Chaipau’s own attempt to struggle but also his friendship with the dealer Chillum (Raghuvir Yadav), who works for a local drug lord/pimp in Baba (Nana Patekar), as he struggles with his addiction to drugs. Another character Chaipau meets, who is also working for Baba against her will, is a young girl named Sola Saal (Chanda Sharma) who would be sold to a brothel as a virginal prostitute. Chaipau would also do things with other young boys such as steel and do whatever work to make money where it is about the need to survive. Though there is a structure, much of it is very loose to play into the day-to-day struggle of these characters where Chaipau would also have to take care of a young girl named Manju (Hansa Vithal) whose mother (Anita Kanwar) is a prostitute that is married to Baba. The script would also show these children trying to do whatever they can to have good lives where there’s a moment in the third act where they work for a wedding for 20 rupees and how bad they’re treated by the people in the party including children their own age.

Mira Nair’s direction definitely has an air of realism to the film as it was shot around 52 different locations in and around Mumbai in the span of 52 days. Going for a cinema verite style of sorts, Nair captures that sense of energy and chaos that surrounds the streets of Mumbai where it does feel cramped and claustrophobic in its narrow streets. Nair’s usage of medium shots and some close-ups add to that sense of claustrophobia into the frame as it include some dramatic moments between Baba and his wife arguing about the state of the things. There are also these discomforting moments when a touring journalist (Sanjana Kapoor) is thinking about interviewing Baba until she sees his abuse towards Chillum. Nair’s direction would have some wide shots to have a look into Mumbai as this world that is very vibrant world as it’s also got a grimy look yet has a tone that feels very exotic in the way it smells and feels. Nair also has this air of a world that is trying to catch up with the modern world but there is so much that is holding it back as people are struggling to live day-by-day.

Even as Chaipau and other kids are doing the best they can only for so much to go wrong where he and Manju would be sent somewhere else in its third act. It play into that reality of India trying to reinvent itself but also the reality of these children who might not have a future no matter how hard they struggle. Overall, Nair crafts a mesmerizing yet provocative film about children struggling to survive in the streets of Mumbai.

Cinematographer Sandi Sissel does excellent work with the film‘s cinematography in the way it has this mixture of beauty and grit that play into the look of many of the daytime exteriors and interiors in Mumbai along with straightforward lighting for some of the nighttime interior scenes. Editor Barry Alexander Brown does amazing work with the stylish usage of jump-cuts and dissolves to play into some of the action and dramatic moments as it also captures that sense of energy of the city. Production designer Mitch Epstein, with art directors Nitin Chandrakant Desai and Nitish Roy, does fantastic work with the look of some of the places inside where the characters live as well as a few prop creations. Sound editor Margaret Crimmins does nice work with the sound as it has an air of realism in the way it captures a lot in what is recorded on location. The film’s music by L. Subramaniam does incredible work with the music in its mixture traditional Indian music with elements of jazz to play into a world that is modern but also raucous.

The casting by Hassan Kutty is brilliant as it features some notable small roles from Sanjana Kapoor as a foreign reporter, Anita Kanwar as Baba’s neglected and frustrated wife, and Irrfan Khan in a small role as a letter writer. Nana Patekar is fantastic as the very devious Baba as a man who claims to be a lot of things but is really evil as he is abusive towards his wife and abusive towards their daughter Manju. Hansa Vithal is wonderful as Manju as a little girl who helps Chaipau with some chores as well as wanting to play with someone as she embodies that air of innocence. Chanda Sharma is excellent in a largely silent role as Sola Saal as a young teenager who is forced to become a virginal prostitute as he copes with her role only to find solace through Chaipau’s generosity.

Raghuvir Yadav is amazing as Chillum as a small-time drug dealer who struggles with his addiction as he takes in Chaipau and help him while dealing with Baba’s own disdain towards him. Finally, there’s Shafiq Syed in a phenomenal performance as Krishna/Chaipau as this young boy struggling to work and make money to return home where he also deals with the horror of his surroundings and the people he would encounter where he would see good in the few he meet as it is this very realistic yet evocative performance.

Salaam Bombay! is an outstanding film from Mira Nair. Featuring an incredible cast, sumptuous images, and a mesmerizing score, the film is truly one of a kind in terms of capturing a world on the fringes of society as it is largely told from the perspective of a young boy and those trying to survive in the streets of Mumbai. In the end, Salaam Bombay! is a magnificent film from Mira Nair.

Haven't even heard of this one. My knowledge of Indian cinema is severely lacking. This sounds good, though.

I'm glad you noted the year on this one - your review revived my memory a bit, but boy were there cobwebs!

@Wendell-There's really 2 filmmakers in Indian cinema to check out that I know of. Satyajit Ray and Mira Nair as this film is essential.

@assholeswatchingmovies.com-It was on TCM last year and I recorded it knowing that I would see it next year as it is such a great film. My mom, who is a fan of movies set in India, saw it and liked it as well.

Right off the bat this reminds me a bit of Slumdog Millionaire but of course it's quite different. I had just rewatched Mira Nair's Vanity Fair, but I haven't seen this one yet. Great review Steven!

@ruth-Thank you. Actually, this was the film that inspired bits of Slumdog Millionaire but it's far more visceral and it's definitely one of Nair's best films as I really hope there's a future Blu-Ray release coming soon as it's a film that everyone should see.