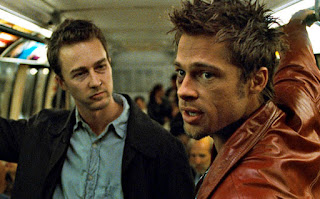 Based on the novel by Chuck Palahniuk, Fight Club is the story of a troubled white-collar corporate worker who meets a mysterious man where the two form a fight club as an outlet for their rage. Directed by David Fincher and screenplay by Jim Uhls, the film is a study of a man becoming discontent with his world as he turns to violence as a way to act out only for things to get more complicated. Starring Edward Norton, Brad Pitt, Helena Bonham Carter, Jared Leto, and Meat Loaf Aday. Fight Club is a gripping and intense film from David Fincher.

The film is an exploration of a man whose life as a white-collar corporate worker has made him unhappy until he meets a mysterious man where they form a secret fight club where the two and several other men engaging in fights under a bar. There, they live this life in secrecy where it would eventually morph into something bigger that would make the film’s unnamed protagonist (Edward Norton) uneasy. It’s a film that isn’t just about this growing discontent with a world that has become corporate but also filled with ads and the need to consume products where this man who is also its narrator. It’s also about a man’s reaction where he would get the help of this mysterious man named Tyler Durden (Brad Pitt) who is this very odd yet intelligent figure that represents this idea of anarchy and nihilism that the narrator needs in a world that has stifled him.

Jim Uhls’ screenplay has this unique approach to not just the narration in how the narrator doesn’t just react to his situation but also deal with the fact that he lives in this ultra-consumerist world which is nearly soul-crushing and also unsatisfying. The first act is about the narrator’s life and how he got himself into these group meetings with people suffering cancer and all sorts of disease where he would also see this woman named Marla Singer (Helena Bonham Carter) doing the same as the two reluctantly make a deal. Singer would be this character that would pop up in the narrator’s life as she would later be integral to the film’s second act as she sleeps around with Durden and then wonder what these two guys are doing. The second act isn’t just about the formation of fight club but also its evolution into something that becomes this haven for men who are disgusted with this ultra-corporate and ultra-consumerist world where they fight as well as antagonize the status quo.

There is also a lot of ambiguity that occurs as it relates to the narrator’s friendship with Durden where it does start off as two men dissatisfied with the ways of the world but Durden is the one who is doing something. It’s that sense of action that intrigues the narrator who needs something as he had lost his home in a fire and starts to act out against his own boss (Zach Grenier). The film’s third act isn’t just about the fight club’s evolution but also in Durden’s view of the world as it evolved into something bigger in an act against the world of capitalism. The result would lead to a lot of things but a view that has made the narrator uneasy as well as deal with these men who had become this community that are all about chaos.

David Fincher’s direction is quite stylish but also very daring for the fact that he’s making a Hollywood studio picture that is about anarchy and anti-corporatism, anti-capitalism, and anti-consumerism. The film opens with Durden putting a gun into the narrator’s mouth as much of the film is told in a reflective narrative of sorts where it plays into the narrator coping with his life and what it had become. Shot on location in Los Angeles, the film plays into this world that is very modern as well as very consumerist where it is overwhelming in how ads and products are being shown to create something that is scary. Fincher’s usage of wide and medium shots help play into the world while he would also create some unique camera angles and movements to play into some of the chaotic elements including the fights.

The fights do have this air of brutality but also a beauty that is presented underneath its ugliness and graphic violence. There are also scenes that are quite surreal as it relates to some sex scenes involving the narrator and Marla where the former isn’t sure if he really had sex with her. One key moment during the second act is where the narrator sees the many jobs that Durden does including being a film projector where there is a moment where the fourth wall is broken. There’s also these little moments early in the film that serves as a sense of foreshadow where there’s a strange object that emerges on a frame as it plays into the narrator’s growing disdain towards his environment. The film’s third act is quite intense but also displays a lot into aspects of surrealism into the world that the narrator is in and what Durden is about to do forcing the two to have a showdown. Overall, Fincher creates a rapturous yet haunting film about a man’s disdain with the world of consumerism and capitalism that forces him to team with another man and form a fight club.

Cinematographer Jeff Cronenweth does amazing work with the film‘s very stylized yet somewhat de-colored cinematography the intentionally bland look of the narrator‘s life in his semi-posh condo and the office he works at to the more grimy look for many of the interior/exterior scenes at night as well as the home that he shares with Durden. Editor James Haygood does fantastic work with the editing in not just creating some unique rhythmic cuts and stylish usages of jump-cuts and slow-motion cuts but also in the way these mysterious objects would pop up early in the film. Production designer Alex McDowell, with set decorator Jay Hart and art director Chris Gorack, does brilliant work with the look of the condo that the narrator lived in to the dilapidated and decayed home that Durden lives in as well as the basement in the bar where many of the fights at the fight club happens. Costume designer Michael Kaplan does nice work with the costumes from the bland look of the narrator early in the film to the stylish clothes that Durden and Marla wear to play into their anti-conformist attitude

Special makeup effects supervisor Rob Bottin does excellent work with some of the makeup from the design of the big breasts that one of the narrator‘s friends in Bob sports to look of some of the people that are beaten up at fight club. Visual effects supervisors Kevin Tod Haug and Kevin Mack do superb work with some of the visual effects in not just some of the set dressing but also in some eerie scenes at relates to how soap is made and other surreal moments in the film. Sound designer Ren Klyce and sound editor Richard Hymns do incredible work with the sound in the way some objects sound as well as the atmosphere in the fight club. The film’s music by John King and Mike Simpson, aka the Dust Brothers, is phenomenal for its mixture of drone-heavy electronic music with some industrial and ambient textures to play into the drama and violence while the soundtrack features music from Tom Waits, Marlene Dietrich, and the Pixies.

The casting by Laray Mayfield is wonderful as it features some notable small roles from Zach Grenier as the narrator’s boss, Rachel Singer as a cancer-stricken women at a group meeting, Peter Iacangelo as the bar owner who is from the mob that isn’t keen on having the fight club in his basement, Thom Gossom Jr. as a detective who investigates the arson of the narrator’s apartment, Pat McNamara as the police commissioner, Joon Kim as a convenience store cashier Durden threatens to kill, and Jared Leto in a small yet terrific performance as a fight club member whom Durden takes a liking to late in the film. Meat Loaf Aday is excellent as Bob as a man with massive man-breasts who deals with the loss of his testicles as the narrator befriends him during a meeting as he would also become part of the fight club.

Helena Bonham Carter is fantastic as Marla Singer as a troubled woman who attends to a lot of group meetings for strange reasons as well as be someone who is also an addict as she befriends Durden while somewhat antagonize the narrator. Brad Pitt is remarkable as Tyler Durden as this mysterious soap maker who is the embodiment of complete and absolute anarchy where is he also quite intelligent about the ways of the world and how consumerism has ruined the world as Pitt just owns the part with his charm and the ability to be cool. Finally, there’s Edward Norton in a tremendous performance as this unnamed narrator as this white-collar corporate worker for an automobile corporation who suffers from insomnia and depression who finds himself taking part in a world where he gets into fights and stands up for himself only to deal with the severity of what he and Durden created as it’s a very grounded and visceral performance from Norton.

Fight Club is a magnificent film from David Fincher that features incredible performances from Edward Norton, Brad Pitt, and Helena Bonham Carter. Featuring an inventive script, dazzling visuals, and an eerie score, the film is truly a dark yet intense film that explores anarchy and nihilism at its most profane. It is also a film that manages to critique this world of corporate and consumerist culture that has take hold of humanity in the worst ways. In the end, Fight Club is an outstanding film from David Fincher.

It's weird to have a soft spot for such a hard movie, but this one will always impress me. And I love Marla - she's my favourite character, quite unexpected, and well-cast.

I love Fight Club. Even though my friends spoiled the ending for me right before I sat down to watch it. I guess I deserved it for waiting so long. lol

I have to revisit this one. I was loving it for most of the movie, then I hated the ending and that kinda ruined the film for me. It's been some years since I saw it last. I'm curious to know if I'll feel the same way. All three if the main actors are fante. No arguments, there.

If it weren't for ZODIAC I'd say that FIGHT CLUB is Fincher's masterpiece but that one just edges this out... JUST. I remember seeing it opening weekend in a nearly empty theater. Not surprised that this one didn't connect with a mainstream audience as it was just too out there, too extreme for most but like any good cult film it found its audience on home video.

@assholeswatchingmovies.com-Marla was awesome and Helena Bonham Carter ruled in that film. I would love to have a date with her.

@Brittani-I had never seen this before until this past weekend though I was aware of the twist ending which actually made it more interesting when I saw it.

@Wendell-I think it is time to re-watch it. I had never seen it in its entirety believe it or not. I think if I had seen it when it came out, I probably wouldn't have understood it.

@J.D. Lafrance-That must've been an odd screening but then again. Great movies aren't initially seen by a wide audience. Still, this is a great film and is actually very smacked on about this consumerist culture that we live in as it's gotten worse.