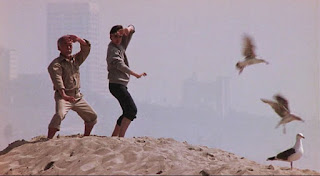 Directed by John G. Avildsen and written by Robert Mark Kamen, The Karate Kid Part III is the third film of the series where both Daniel LaRusso and Mr. Miyagi become victims in a revenge scheme by an old foe, his friend, and a young contender where the two find themselves diverging into different paths. The film is a revenge tales of sort but from the antagonists point of view where it’s the good guys that get attacked forcing them to fight back as both Ralph Macchio and Noriyuki “Pat” Morita respectively reprise their roles as Daniel LaRusso and Keisuke Miyagi. Also starring Thomas Ian Griffith, Robyn Lively, Sean Kanan, and Martin Kove as Kreese. The Karate Kid Part III is a silly and idiotic film from John G. Avildsen.

The film is a revenge tale of sorts as it relates to character of John Kreese where the film picks up months after the events in the second film where he loses his student and his dojo is going bankrupt where he gets help from his old Vietnam comrade in Terry Silver (Thomas Ian Griffith) who is a billionaire that actually founded the dojo. Silver decides to give Kreese a vacation to Tahiti while he would be the ones to find LaRusso and Miyagi and make their lives hell with the help of a vicious karate fighter who wants LaRusso’s title where Silver promises a cut of dojo’s profits if he beats LaRusso. It’s a film that is very strange in the way it handles the concept of revenge as it’s told from the side of its antagonists where it is an interesting idea but there’s a lot of problems with the way it’s handled.

Robert Mark Kamen’s script (which was largely re-written by another writer) doesn’t just portray many of the revenge aspects of the film to be very silly but it’s also in the motivations. While Kreese has legit reasons for wanting revenge on Miyagi and LaRusso, the character of Mike Barnes (Sean Kanan) is only involved because of money while Silver is just there for kicks. For LaRusso and Miyagi, the script has them returning from Okinawa where Miyagi loses his job until LaRusso has an idea to create a bonsai tree shop for Miyagi that he could run. At the same time, LaRusso is asked to return to defend his title but doesn’t want to at first until he is threatened and blackmailed by Barnes which only causes a schism in his relationship with Miyagi where he unknowingly turns to Silver for help unaware of Silver’s true intentions. The development in LaRusso is very startling in how bad his character would regress from confronting someone who is able to kill him to now being whiny and doing stupid things around guys who are just as idiotic.

Another aspect of the script that doesn’t work is another love interest for LaRusso in a pottery shop clerk named Jessica (Robyn Lively) who is really an uninteresting character that is put in bad situations whenever LaRusso finds himself in trouble with Barnes and his goons. It adds so much to LaRusso’s regressive development where he would become scared of these guys forcing Miyagi to finally step in and set his student back on the right path.

John G. Avildsen’s direction doesn’t really do anything new at all in terms of compositions and such but that isn’t really the problem with the film at all. Avildsen does manage to keep things lively and engaging at times despite the many problems with the script but it’s really a lot of things that is wrong. The film is set months or days after the event of the second film as it had been three years since the release of that second film and five years since the release of the first. There is something wrong with the way it is set as LaRusso looks older as well as the fact that a lot of things had changed in the past five years from the music and the culture itself. It is among the many things in the film that feels very wrong not just tonally but also in some of the visual aspects of the film. It’s also a bit more violent as it also adds to the awkwardness of what Avildsen wants. Even as the climax where LaRusso would face Barnes comes off as idiotic and pointless. Overall, Avildsen creates a very messy and nonsensical film about a man and his student being victims in a silly revenge scheme.

Cinematographer Steve Yaconelli does some nice work with the cinematography as it does have some amazing lighting in the sequence where Miyagi confronts Kreese, Silver, and Barnes along with some of the daytime exteriors as it‘s shot largely in Southern California. Editors John G. Avildsen and John Carter do OK work with the editing as it relates to some of the suspense and action though not enough work is put into trimming a few things that went on for too long. Production designer William F. Matthews, with set decorator Catherine Mann and art director Christopher Burian-Mohr, does terrific work with the sets from the look of Miyagi‘s home to the bonsai tree shop he and Daniel would hope to run.

Sound editor Scott Hecker does nice work with some of the sound in the way action is presented along with some of the intense moments in the Californian forests. The film’s music by Bill Conti is superb though it‘s just really just re-hashes of previous scores from the other films though they‘re still effective while music supervisor Brooks Arthur provides a terrible music soundtrack of pop and rock music of the late 80s that just sound very dated and slick.

The casting by Caro Jones is alright for the cast that is assembled as it features appearances from Frances Bay as the old lady that lived in Daniel’s old apartment complex, Randee Heller as Daniel’s mother, Gabe Jarret as a guy that was harassing Jessica at a club that Daniel would brutally beat up, fight choreographer Pat E. Johnson as the tournament referee, and Jonathan Avildsen as one of Barnes’ friends and goons in Snake who is just very annoying. Sean Kanan is alright as Mike Barnes as a skilled and vicious karate fighter who agrees to antagonize and scare LaRusso into taking part of the tournament for Silver with a cut of whatever Silver plans to do for the resurrection of the Cobra Kai dojo. Martin Kove is terrific as John Kreese as the former Corba Kai sensei who feels humiliated by Miyagi as he turns to Silver for help where gladly takes part in Silver’s plan for vengeance.

Robyn Lively is terrible as Jessica as this young woman who works at a pottery shop that finds herself in trouble whenever she’s around Daniel as it involves Mike Barnes as she and Macchio have no chemistry at all. Thomas Ian Griffith is fantastic as Terry Silver where he just exudes the idea of a slimy billionaire that wants to help his friend Kreese and just bring hell to Miyagi and LaRusso where he is just fun to watch. Noriyuki “Pat” Morita is excellent as Miyagi as the karate master who is concerned with LaRusso’s behavior as well as becoming disappointed with LaRusso’s decisions where he try to stay out of the way until he realizes what is really going on. Finally, there’s Ralph Macchio in a horrible performance as Daniel LaRusso where he spends a lot of the film either being whiny or being angry where Macchio would overdo things as he just makes LaRusso even more pathetic than he was in the first film.

I just couldn't, with this film. It was just horrible. The only thing worse is The Next Karate Kid with Hilary Swank. Yeesh.

Yeah, the one after that was pretty bad and it didn't really work at all.

This one however to me, was the worst (not counting the lame remake of the original). I had the unfortunate of seeing this in the theaters when I was 8 as myself and my sister grew up on the first and second film. Wow, neither of us liked it. While I did like the Terry Silver character and Miyagi, as usual, was cool. It was just fuckin' stupid and I was so confused by it. Over the years through re-watches (just out of boredom and nostalgia), I began to notice the things that felt off as the fact that it was set in '84-'85 but you could tell that it was years after that. Such a bad fucking film.