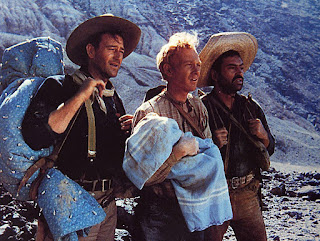 Based on the short novelette by Peter B. Kyne, 3 Godfathers is the story of three outlaws who find themselves taking care of a baby as they try to bring it to civilization in an act of goodwill. Directed by John Ford and screenplay by Frank S. Nugent and Laurence Stallings, the film is a dramatic tale in which three men find themselves in a situation as well as trying to do some good in a world that is often chaotic. Starring John Wayne, Pedro Armendariz, Harry Carey Jr., Ward Bond, Mae Marsh, and Ben Johnson. 3 Godfathers is a riveting and compelling film from John Ford.

Following a robbery that left one of three criminals wounded and forced to hide in the desert with very little water, three criminals find a covered wagon in the middle of the desert where a dying woman is giving birth as they made a promise to take care of her baby. It’s a film with a simple story yet it bears a lot of spiritual elements while balancing with it elements of the western genre as it manages to be a lot more. The film’s screenplay by Frank S. Nugent and Laurence Stallings start off with these three men wanting to rob a bank as it would be successful except one of the men gets wounded and they also lose their water supply. It becomes cat-and-mouse game between these criminals and a sheriff who is accompanied by a posse of deputies where it is a game of wits. Once the three men find this woman and help her give birth, they realize that they need to get this baby to shelter as it’s no longer about them anymore. Even as they also struggle to do the right thing amidst their lack of water and trekking through the treacherous desert.

John Ford’s direction is definitely rapturous in terms of its visuals as a lot of the film would be shot in and around Death Valley, California as Arizona and parts of Utah. The locations would give Ford a canvas to work with as his usage of the wide shots would play into the beauty of the American West and the Rocky Mountains where he would create images that are just gorgeous to watch. Especially in the attention to detail in how he would frame his actors for a shot while he would also use medium shots to create some intimacy but also moments where it plays into some suspense and drama. The film is set during the Christmas holidays which does add to the air of spirituality in the journey the three criminals would take as it has biblical references while giving the men something more noble than what they were doing. All of which play into doing what is right for a child and bring him into a world where no matter how bad things can be. There is a sense of good that can come in and with people who will do the right thing. Overall, Ford creates a fascinating yet powerful film about three criminals trying to make a vow for a dying woman to take care of her baby.

Cinematographer Winton C. Hoch does amazing work with the film‘s gorgeous and colorful cinematography with the usage of the Technicolor film stock as it captures a lot of the beauty of the Death Valley desert as well as the Rocky Mountains along with some unique yet naturalistic lighting for the scenes set at night. Editor Jack Murray does excellent work with the editing as it is straightforward with some rhythmic cuts for some of the action and a few dissolves for transitions. Art director Jack Basevi and set decorator Joseph Kish do amazing work with the look of the town that the criminals encounter early in the film as well as the water tank stops on the railroad. The sound work of Joseph I. Kane and Frank Moran is terrific as it plays into the sound of train whistles and gunfire as well as other naturalistic elements in the sound. The film’s music by Richard Hageman is fantastic for its orchestral-based music with its string arrangements that range from bombastic to somber as it plays into the many moods in the film as it would also include traditional songs of the times.

The film’s superb cast include some notable small roles from Charles Halton as the bank manager, Dorothy Ford as the bank manager’s niece, Guy Kibbee as the local judge, Jane Darwell as a train stop manager in Miss Florie, Ben Johnson as a member of the deputy posse, Hank Worden as a sheriff’s deputy in Curley, Mae Marsh as the sheriff’s wife, and Mildred Natwick as the dying mother the criminals find in the desert as they help deliver her baby. Ward Bond is fantastic as Sheriff Buck Sweet as a man who is going after the three criminals while admiring their strategy in how to evade capture. In the titular roles as the three criminals are its leads in Harry Carey Jr., Pedro Armendariz, and John Wayne in great performances. In the role of the youngest in William Kearney aka the Abilene Kid, Carey provides that sense of youth but also a spirituality as someone that is well-versed in the Bible while dealing with a gunshot wound on his shoulder.

Pedro Armendariz’s performance as Pete “Pedro” Fuerte is just fun to watch as someone that randomly speaks Spanish as he’s a Mexican bandit yet knows a lot about raising children while also being a man that knows a lot about the story of the three wise men where he sees it as a call to God. John Wayne’s performance as Robert Marmaduke Hightower is really Wayne in one of his best roles as this aging bandit that has seen a lot and knows what to do. Yet, he becomes this unlikely father for this baby while he is determined to do the right thing.

Ack, great write up! You got me all juiced to see it again.

I totally forgot this film existed. When I clicked on your link I just knew you had done something on The Godfather trilogy, lol. Still need to see this one.

Well, I think if you're having a Xmas movie marathon. This would be a good film see during the Xmas holidays.

@Wendell-Yeah, everyone thought I did the trilogy but I've done that already and I wanted to focus more on doing one more film by John Ford which I really think is one of his finest films.

I thought of Three Men & A Baby when I read your initial paragraph, I wonder if that movie was inspired by this. I hadn't heard of it before Steven, but now I'm intrigued!

@ruth-Actually, this film is a remake of a silent film Ford did many years before as he just updated it with a new cast and new technology for its time but it is actually inspired by the three wise men in the story of Jesus Christ.