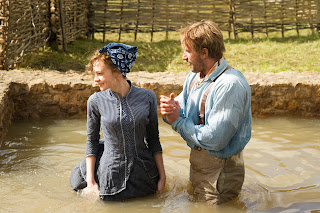 Based on the novel by Thomas Hardy, Far from the Madding Crowd is the story of a young woman in Victorian Britain who finds herself being pursued by three different suitors as she copes with what she wants and the role she needs to take. Directed by Thomas Vinterberg and screenplay by David Nicholls, the film is a study of a woman who is offered opportunities to improve her life as well as give into the temptations of the world around her. Starring Carey Mulligan, Matthias Schoenaerts, Juno Temple, Tom Sturridge, Jessica Barden, and Michael Sheen. Far from the Madding Crowd is a sublime and compelling film from Thomas Vinterberg.

Set in 1870 Britain during the reign of Queen Victoria, the film follows the life of an independent-minded young woman who has inherited her uncle’s farm hoping to turn it into a source of income for a small British town as she is pursued by two different men while a farmer who works for her farm pines for her from afar. It’s a film that follows the life of this woman who is well-educated and humble as she is also an outsider of sorts that likes to work the farm as she has been raised by relatives. Yet, Bathsheba Everdene (Carey Mulligan) is also someone determined to make her own mark in the world as David Nicholls’ screenplay follow every move she makes through good and bad times as she struggles to maintain her independence as well as be pursued by three different men. The first in the farmer Gabriel Oak (Matthias Schoenaerts) is this man that is also an individual as he would court Bathsheba early on but after losing his own farm due to circumstances beyond his control. He would help Bathsheba make her farm profitable as it gets the attention of the second suitor in William Boldwood (Michael Sheen).

Boldwood is a character that is just as interesting as Bathsheba and Gabriel as he is a wealthy man that could give Bathsheba a lot to offer as he is also quite kind and has some respect for Oak. Bathsheba, Gabriel, and Boldwood are definitely characters who are more well-defined in not just their development but also as people that characters actually care for. Something the film’s third suitor in Sgt. Frank Troy (Tom Sturridge) doesn’t have even though his character arc is well-defined as someone who was supposed to marry someone else but a simple misunderstanding leaves him heartbroken until he meets Bathsheba and seduces her. While his character is meant to be this despicable and dishonorable man that Oak doesn’t approve of, he is someone that seems to be more fleshed out but never develops into something more engaging as he is a major flaw in the film’s script.

Thomas Vinterberg’s direction is definitely mesmerizing in terms of the world that he presents as it is largely shot on location in Dorset as well as other rural parts of Britain. While many of the wide and medium shots around the locations are simple, Vinterberg does maintain something that still revels in style as he creates something that owes a lot to period films of the past. Yet, he would create some compositions in the medium shots and close-ups to maintain an air of intimacy in the way the characters interact while displaying bits of restrained sexuality in the way Sgt. Troy seduces Bathsheba in a scene involving a sword. There are moments where there is a liveliness and a sense of community to the farming scenes where Vinterberg definitely has some unique visual ideas for the way the film progresses as many of the scenes set in spring, summer, and fall have something that feels open. Yet, when Sgt. Troy enters the picture is when things become tense and tumultuous where the look changes into something drab and then comes winter where it play into not just decline for Bathsheba but also loss and desperation. All of which play into the journey she took and the role she seems to crave for and try to return to in a world that isn’t welcome to individual ideas. Overall, Vinterberg creates an engaging though flawed film about a woman trying to define herself in Victorian-era Britain.

Cinematographer Charlotte Bruus Christensen does brilliant work with the film‘s cinematography from the usage of gorgeous sunlight for many of the exteriors as well as the way some of the interiors are lit for the scenes set at night. Editor Claire Simpson does excellent work with the editing as it is largely straightforward with some rhythmic cuts for some of the film‘s intense moments. Production designer Kave Quinn, with set decorator Niamh Coulter and supervising art director Julia Castle, does amazing work with the set design from the interiors of the estates of Bathsheba and Boldwood to the look of the small town where many of the locals socialize at. Costume designer Janet Patterson does fantastic work with the costumes from the dresses that Bathsheba would wear throughout the course of the film to the clothes of the men including Sgt. Troy‘s uniform.

Makeup artist Belinda Parish and hair stylist Tracy Smith does nice work with the hairstyles of the women of that time as well as some of the beards and mustaches of the men. Sound designer Glenn Freemantle does superb work with the sound as it play into the liveliness of the social gatherings and meeting as well as in the sparse moments in the intimate scenes involving some of the characters. The film’s music by Craig Armstrong is wonderful as it has these lovely orchestral flourishes that play into the drama while being low-key in some moments with the music soundtrack filled with folk songs of the time including a ballad sung by Bathsheba and Boldwood.

The casting by Nina Gold and Theo Park is terrific as it feature some notable small roles from Tilly Vosburgh as a relative of Bathsheba early in the film, Bradley Hall as a young farmhand in Joseph, Sam Phillips as a recruiting sergeant for the army, and Hilton McRae as another farmhand in Jacob who proves to be quite loyal to Bathsheba and Oak. Juno Temple is wonderful as Sgt. Troy’s old flame Fanny as a young woman who was supposed to marry him but a misunderstand would lead her to ruins. Jessica Barden is fantastic as Liddy as Bathsheba’s aide who observes a lot of what is going on as well as have her say about what Bathsheba should do. Tom Sturridge’s performance as Sgt. Troy is definitely one of the worst aspects of the film not because his character is underwritten but also for the fact that Sturridge often presents himself as smug at times while never really do anything to make the character interesting.

Michael Sheen is brilliant as William Boldwood as a wealthy but lonely neighbor who has land that is quite profitable as well as court Bathsheba kindly where it’s a performance of restraint and charm as while Sheen also displays some humility as someone that is just a good man. Matthias Schoenaerts is amazing as Gabriel Oak as a farmer who lost it all as he works for Bathsheba where he tries to maintain his feelings for her as it’s one of the film’s best performances as Schoenaerts display that anguish but willingness to be loyal to the woman he cares for. Finally, there’s Carey Mulligan in a sensational performance as Bathsheba Everdene as a young woman who has inherited an estate and farm from her late uncle as she hopes to make it worth something again as she struggles to maintain her independence while coping with the complications of love as it’s one of Mulligan’s finest performances so far.

Far from the Madding Crowd is a stellar film from Thomas Vinterberg thanks in part to great performances from Carey Mulligan, Matthias Schoenaerts, and Michael Sheen. Despite some of the shortcoming aspects of the script, the film is still an interesting period drama that explores a woman’s search for herself in a world filled with many rules to keep her down. In the end, Far from the Madding Crowd is a superb film from Thomas Vinterberg.

I kept getting so frustrated with Carey's character in this film. Oh well, at least Matthias Schoenaerts is hot. I also learned that I had been reading the title incorrectly for years. I thought it was "Maddening Crowd" whoops lol.

Yeah, I can understand that sense of confusion. Yeah, I wanted Bathsheba to go with either Gabriel or Boldwood as the latter is just a nice guy. I didn't like that Sgt. Troy. He's a twat.

Oooh another Carey Mulligan film! I quite love this one, and the casting overall is perfect except for Tom Sturridge which as you said is smug and not someone I'd picture Bathsheba falling in love with. But Carey and Matthias made for a swoon-worthy couple!

@ruth-I totally agree with on Sgt. Troy as he is the one thing in the film that didn't work as I'm sure other adaptations and the book made him more interesting as well as give more reason into why Bathsheba would fall for him.

It's in my top 5 of 2015, I think it worked as a period film. I was ok with all the performances, but it's possible I might feel less satisfied with Vinterberg's film if I had read the book or seen other film/TV adaptations.

@Chris-I had thought of seeing the film version from the 1960s as a reference point and I did have it in my DVR. Unfortunately, I had to change digital cable services and lost that film. Maybe I'll see what John Schlesinger was doing in that version and see what Vinterberg did differently.