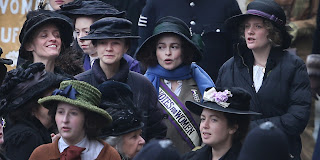 Directed by Sarah Gavron and written by Abi Morgan, Suffragette is the story of a laundress who takes part of the Suffragette movement in the 1910s in the hopes that she and other women would have the right to vote. The film is a historical drama set in the real-life period of women’s suffrage in Great Britain before World War I. Starring Carey Mulligan, Helena Bonham Carter, Anne-Marie Duff, Brendan Gleeson, Natalie Press, Ben Whishaw, Romola Garai, and Meryl Streep. Suffragette is a compelling yet evocative film from Sarah Gavron.

Set in 1912 Britain after many attempts to get the right for women to vote, the film is about a young laundress who finds herself being part of the Suffragettes movement where she eventually becomes an active member. It’s a film that follows a woman who is lured into a movement she is reluctant to be part of yet is unable to ignore the treatment that she has endured working in the laundry factor as she notices the teenage daughter of a Suffragette activist is being sexually harassed by her boss. Even as she also realizes that she doesn’t have the legal right to determine the future of her own son which prompts her to not only take part full-on but also learn what it means to stand up for herself and other women. Abi Morgan’s screenplay doesn’t just follow the journey of this young woman in Maud Watts (Carey Mulligan) but also the women she would meet as she takes part in this movement.

While she would get herself into some trouble as well as risk losing her son who is forced to be cared by his father Sonny (Ben Whishaw), Maud would find a purpose about what to do as she thinks about the women in the future. Still, she and the other Suffragettes would face numerous challenges and obstacles as they’re seen by those in the government including authority figures such as Inspector Steed (Brendan Gleeson) who is this unconventional antagonist of sorts. Notably as he actually cares about the women yet is aware of the job he has to do while he becomes disgusted with the tactics of those he works for. One aspect of the script that is underwhelming is the appearance of Suffragette leader Emmeline Pankhurst (Meryl Streep) as she is this mysterious figure who makes her appearance in the second act for a big speech and then she is gone as her character would disappear.

Sarah Gavron’s direction is quite simple in terms of the compositions that are created as it also has some ambition for the fact that it is shot on location in London and in studios to recreate some of the old buildings. The usage of the wide and medium shots play into the locations as well as the tense and grimy atmosphere of the factories where Maud and Sonny work at as it feels repressive and hard. By the time the film hit the streets, Gavron’s direction definitely becomes richer where it does play into this sense of time where protests are happening as well as a very intimate scene where Maud testifies to the government about her own experience as it would lead to a key moment in her development. There are these moments of violence in how the women are beaten by police as well as do small guerilla-style warfare by blowing up mailboxes. Gavron’s usage of close-ups are definitely entrancing as it play into the anguish that Maud endures as well as what she would have to sacrifice. Notably in the climax as it would play into a real-life key moment that would be the catalyst for the Suffragette movement as it would end with images of a real-life event of the movement. Overall, Gavron creates a fascinating and riveting drama about a young woman joining the Suffragettes movement in their right to have a say in the world.

Cinematographer Eduard Grau does excellent work with the film‘s cinematography from the usage of low-key lights for the interior scenes at the factory as well as what London looked like at night including a key scene involving the bombing of a Parliament member‘s home. Editor Barney Pilling does nice work with the editing as it is largely straightforward with some rhythmic cutting to play into some of the intense moments in the film. Production designer Alice Normington, with art directors Jonathan Houlding and Choi Ho Man and set decorator Barbara Herman-Skelding, does amazing work with the look of the factory as well as the buildings that were prevalent in those times as well as a church where Maud would stay during her time as a Suffragette. Costume designer Jane Petrie does brilliant work with the costumes from the fancy dresses in those times as well as the ragged look of the women during that period of protest and activism.

Hair/makeup designer Sian Grigg does fantastic work with the look of the women in the hairstyles they had as well as some of the burns and scars in Maud‘s skin from years working as a laundress. Visual effects supervisor Simon Hughes does terrific work with the visual effects as it is mostly set-dressing to help create that look of 1912 London in its exterior setting. Sound editors Stephen Griffiths and Andy Shelley do superb work with the sound as it play into the frenzy of the crowd and the protests as well as in the sparse yet eerie moments at the prisons where some of the women would go for their actions. The film’s music by Alexandre Desplat is wonderful for its orchestral-based score with its lush string arrangements that play into the drama as well as some of the intense moments in the film while music supervisor Karen Elliot create a soundtrack that play into the music of the times.

The casting by Fiona Weir is remarkable as it feature some notable small roles from Adam Michael Dodd as Maud and Sonny‘s son George, Grace Stottor as Violet‘s teenage daughter Maggie, Finbar Lynch as Edith‘s loyal husband Hugh, Geoff Bell as the factory foreman Taylor whom Maud dislikes, Samuel West as a government official, and Adrian Schiller as Parliament minister David Lloyd George. Ben Whishaw is terrific as Maud’s husband Sonny as a man that is trying to maintain his role as a man while struggling to take care of his son when Maud isn’t around. Natalie Press is superb as Emily Davidson as a passionate activist who does a lot to herself for the cause as well as be the one person who would make a major sacrifice towards its climax. Romola Garai is fantastic as Alice Haughton as the wife of a government official who is trying to support the Suffragettes any way she can as well as get them to meet with the government. Meryl Streep is excellent in her brief role as Suffragette leader Emmeline Pankhurst as she does have this great presence about her though it’s a role that is just merely a cameo that doesn’t do enough to establish the character.

Brendan Gleeson is amazing as Inspector Steed as a law enforcer whose job is to watch out for the Suffragettes as he is trying to do his job yet is someone that is sympathetic into what these women do as he tries to get them to do less time and such while becoming disgusted with the tactics of his government. Anne-Marie Duff is brilliant as Violet Miller as a woman who had just worked at the laundry factory as she is also quite committed to her work as a Suffragette inviting Maud into the action until she would deal with things beyond her control forcing her to take a step back. Helena Bonham Carter is great as Edith Ellyn as a pharmacist who is one of the organizers of the movement as she is also someone who gives Maud some perspective about what happens if women don‘t get a say about matters into the world. Carey Mulligan is incredible as Maud Watts as this young laundress who is trying to do her role as she is sucked into the world of the Suffragettes where she realizes what it means to her as it‘s performance filled with determination and anguish as it‘s one of Mulligan‘s finest performances to date.

Suffragette is a remarkable film from Sarah Gavron. Featuring a great cast, gorgeous visuals, and some strong themes about women’s right to vote and say something about the world. It is a film that captures a moment in time that shows what women can do in a world that is afraid of change. In the end, Suffragette is a marvelous film from Sarah Gavron.

It is worth watching as it has a great cast as the subject matter couldn't be more important than ever despite what happened. I hope you earn a well-deserved break as I'm going to take some time off around the holidays.

I think this film had some problems which is really unfortunate because Carey Mulligan was SO good in it. After seeing it though, I can't believe how much they advertised Meryl Streep when her entire performance was in the trailer. I was expecting a bigger part from her.

@Brittani-The advertising for the film really hurt it as they should've kept it a secret or something like a special appearance from Meryl Streep or something. It's still a damn good film and Carey is great in this.